The Company is undertaking or will carry out different exploration work programs at Sandstone this year, as demonstrated in the below figure:

Initially, the Company planned ~3,000m of resource definition RC drilling at Sandstone that was based on the estimation of one new deposit; however, the program has now been considerably expanded due to the success of Phase 1 drilling campaign, which identified five new satellite deposits. The revised Phase 2 drilling campaign is targeted at these five new satellite deposits and an extension to Shillington.

Two drill rigs will be employed in this drilling program to infill and extend the new satellite deposits on a nominal 20m x 20m pattern. Besides, ~720m (12 holes) of additional drilling is planned at Shillington to validate a probable southern extension to the deposit discovered in Phase 1 program.

The resource definition RC drilling will produce notional Indicated Mineral Resources to be incorporated in an updated feasibility study planned for completion in Q3 CY 2020.

In the latter stages of the Phase 2 resource definition RC drilling program (July 2020), the Company has also planned to undertake Phase 2 diamond drilling, comprising notionally two HQ3 diamond holes per satellite target (~1,000m in total). The key objectives of this drilling are to:

The survey is being scaled up in expectation of a substantial increase in open pit Mineral Resources at Sandstone.

The Phase 2 RC drilling will be extended to deliver an initial assessment of at least these two exploration priorities presented by the Phase 1 campaign. 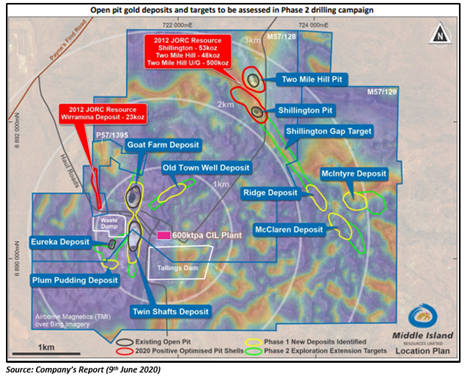 While the Company is yet to finalise details of the exploratory component of this Phase 2 program, it has made the application to extend the current POW over M57/129 to adjust the potential additional drilling. 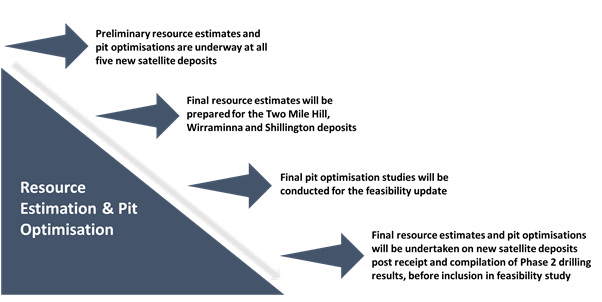 Middle Island deserves credit for the pace at which it is continuing massive open pit drilling campaign at Sandstone Gold Project, that has delivered an extremely successful start. The Company remains well-funded and stays on the beam to accomplish its planned Phase 2 drilling campaign in due course.