Mineral explorer and developer focussing on gold and copper, Empire Resources Limited (ASX:ERL) owns 100 % of two highly prospective projects- Yuinmery Copper-Gold Project and Penny’s Gold Project. Both projects have numerous exploration targets with excellent potential and have been advancing well, owing to the Company’s systematic approach to exploration and an experienced team of exploration, development, and financial professionals.

In May 2020, three RC holes and one re-entry for 462 m at Yuinmery tested the extent of copper-nickel mineralisation at Smith Well, followed up encouraging copper-gold results from March RC drill program at YT01. Further, DHEM geophysical surveys were undertaken to test for off-hole sulphide mineralisation signatures at both prospects. 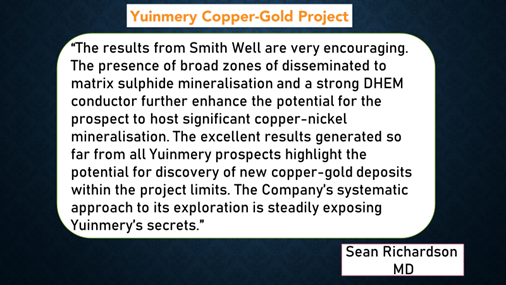 Let us dive into details of these significant updates-

Hole YRC20-19 was designed to test upper-centre of the 2008 modelled DHEM geophysical plate, which-

Hole YRC20-20 was designed to test the north-eastern extent of mineralisation, which-

Location of May 2020 DHEM plate demonstrates good convergence with previous DHEM surveys. Location of the single plate model is interpreted as the upper contact of copper mineralisation, located within highly conductive black shales (as observed in holes YRC20-19 and YRC20-20).

Results of drilling at YT01 indicate the potential for copper-gold mineralisation.

RC drilling in March intercepted copper oxide minerals above the base of oxidation and trace and disseminated sulphides consisting of chalcopyrite, pyrrhotite and pyrite in holes YRC20-14, YRC20-15, YRC20-16 and YRC20-17. Hole YRC20-14 was extended by 24m, based on the end of hole copper anomalism.

No discrete basement conductors were observed in the DHEM data, post DHEM surveys were concluded by SGC-NA.

What Remains in Pipeline?

Further RC drilling is planned for Smith Well prospect to test the strike and depth of mineralisation at this exciting prospect. At YT01 Prospect, further, follow up work is likely, given the indication of potential copper-gold mineralisation.

(Note: All currency in AUD, unless specified otherwise)

Which ASX Travel Stocks Are On Investors’ Radar?