Exploring for Heavy Mineral Sands (HMS) in the world class HMS location of Mozambique, MRG Metals Limited’s (ASX:MRQ) stock was one of the hottest stock on the ASX on 11 June 2020. Trading in the lucrative metals and mining sector of the exchange, MRQ shot up by an astounding 80 % to close at $0.009 with over 89 million shares traded.

A possible reason for the skyrocketing stock performance can be attributed to the Company’s significant laboratory assay results from auger drilling on its Poiombo target within the Corridor South tenement (6621L) of its Corridor Projects.

The laboratory assay results confirms the Auger visual estimate data and Aircore visual estimate data previously outlined by the Company for Poiombo. They further underpin the significant potential for definition of a new high grade HMS target emerging at Poiombo that remains open to the northwest and southeast. The results also confirm that the mineralised footprint extends to the west side of the main road and is up to 5km east-west. 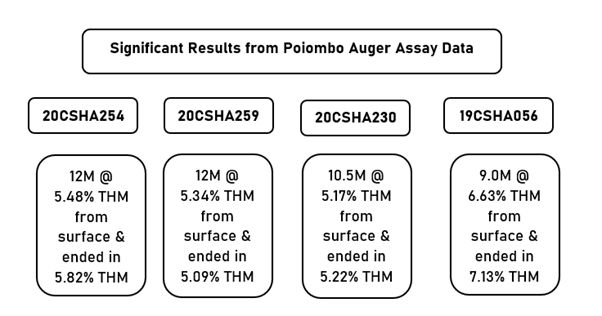 “The program to date at Poiombo looks to have identified the potential for significant tonnage at very significant grades”- Chairman, Mr Andrew Van Der Zwan.

The significant assay results at Poiombo coupled with initial Aircore drilling results affirm the capability for a very large high grade resource from surface and in some areas continuing to depth, says Mr Van Der Zwan. He further states that the Company is on the verge of another discovery, supported by the very high grades intersected in strandline zones at surface and near surface- something expected from MRG Metals’ targeted programs, which can provide multiple infill aircore programs for later in the year.

With Mozambique still operating in a COVID-19 restricted environment, the Company has been able to maintain in country operations and will continue to do so safely until instructed otherwise. In the near-term-

Located within the Corridor South tenement of MRG Metals’ Corridor Projects, the early potential of Poiombo to host a high grade HMS deposit was established in October 2019 from reconnaissance auger hole 19CSHA056 which is located in the heart of the mineralized zone reported in the results.

The auger drilling was part of a program of broad-spaced holes at 500m stations on traverses 1000m apart and designed to test magnetic geophysical anomalies. Auger holes were chosen for lab analysis by categorizing average downhole visual estimated THM%, and samples that attained ≥3% average visual THM were chosen for the analysis and sent to Western GeoLabs in Perth for HLS/ heavy liquid separation analysis (with tetrabromoethane at specific gravity of 2.95)

After being oven dried and disaggregated if required by hand, they were split to ~ 100g sub-samples which was wetted and attritioned to guarantee further breakdown of clay aggregates, if any. After this, de-sliming at 45µm to measure Slime percent took place. The sample was then screened at +1mm to remove and measure Oversize percent followed by HLS analysis.