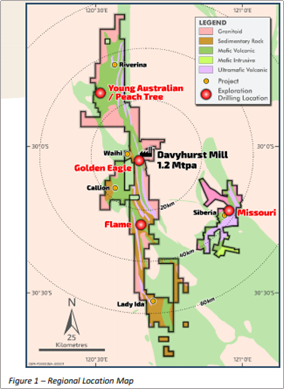 The near-mine Diamond Drilling focused on the down plunge extensions to the Golden Eagle underground mine and a single hole was drilled to examine the untested footwall sequence of the Missouri open pit deposit.

Especially, results derived from the Flame prospect in the southern end of the Golden Lode corridor (Figure 2-4) are highly encouraging and depict high grades over mineable widths, in contiguous holes from surface. These results are located immediately north of an historical 50-100 ppb gold-in-soil auger anomaly that has only been tested by shallow (20-30m deep), broad-spaced RAB drilling in the past.

Furthermore, two fences of RC holes, 400m apart were drilled to test the continuity of mineralisation recorded in old RAB holes to the north and south of one of the laterite pits within the Young Australian prospect, which is located within the Mulline corridor (Figure 5), a 16km long x 2.5km wide, NE-striking zone of highly anomalous gold-in-soils with numerous historical workings and more recent (1990s) shallow laterite open pits.

The result have identified potential coherent structures of economic-grade gold intersections in lower saprolite and fresh rock, under a veneer of transported cover. At Golden Eagle, 8 diamond holes were completed down plunge in the northern shoot of the deposit with results confirming continuation of economic-grade gold mineralisation for at least another 100m beyond the limit of the latest resource published for Golden Eagle, as reported on 8 April 2020.

“The Company has completed more than 47,000 metres of drilling since commencing in June 2019, a vast majority of which has been committed to resource definition drilling. These results represent the first to come from our ongoing regional exploration programs. They provide an exciting insight into the potential prospectivity of the tenement package and we look forward to continued success as the drilling programs progress.” - David Quinlivan, Ora Banda Managing Director.

Now, Ora Banda Mining is continuing with the regional RC program focussing on Mt Ida and Riverina South deposit. Drilling at Mt Ida is the first program the Company has undertaken on the main line of lode in this historical, high-grade mining centre while the second phase of drilling at Riverina would follow up on the significant intersections returned in the initial drilling program (as reported on 9 April 2020), including:

The Flame prospect, largely under explored, is interpreted to lie on the same mineralised trend as the Golden Lode deposit. An RAB drilling conducted in 2005 returned an anomalous intersection of 3m @ 1.27g/t from RB3049. Besides, the Golden Lode deposit lies ~17km to the north and is held by other parties where historical underground mining reportedly produced ~3,300 ounces of gold (Source: Minedex). A number of significant intercepts were returned from this zone including 2.0m @ 19.22 g/t Au, 9.0m @ 5.53g/t Au and 3.0m @ 8.19 g/t Au (at a 0.5g/t lower cut-off). This entire mineralised zone bulks out to 25m @ 4.64g/t Au if a lower cut off of 0.2g/t is applied. 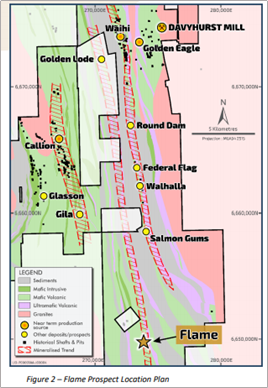 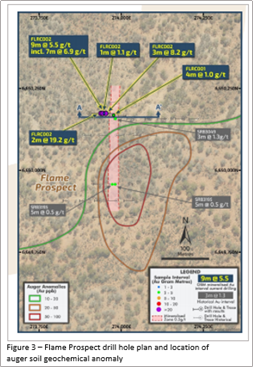 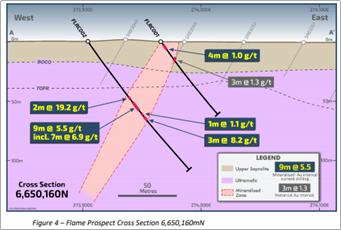 The Young Australian prospect is located to the centre of the Mulline gold corridor, in the northern part of Ora Banda’s Davyhurst Gold Project. The Mulline corridor is a north trending ~16km long x 2.5km wide zone with a high concentration of the historic shafts, old workings and more recent shallow laterite pits. Drilling at Young Australian has intersected multiple zones of quartz-sulphide.

Exploration drilling at Missouri South East indicated good mineralisation but not of sufficient widths and grade to pursue further at this time.