The Company’s RC drilling campaign is targeted to validate, expand and/or test around 14 open pit gold targets within 4km range of its wholly-owned Sandstone gold processing plant. The open pit gold targets and deposit extensions designated for drilling have been prioritised by the Company following a detailed internal and external technical review.

Middle Island initiated a major, multi-phase open pit drilling campaign at its Sandstone gold project in January 2020 to target around 17 identified prospects and deposits within the project’s tenure. The campaign comprises an initial aircore program, followed by two phases of RC drilling and a limited program of oxide diamond coring. 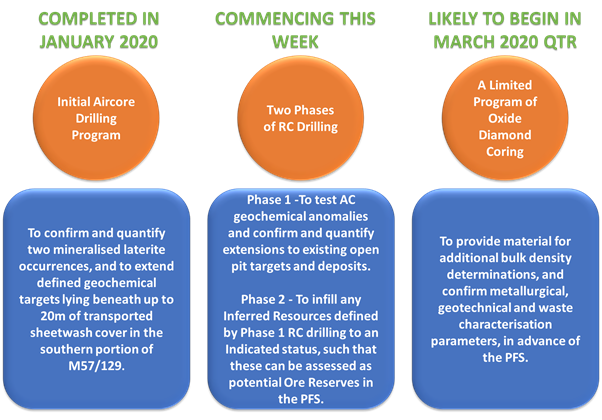 Though the initial aircore drilling program has been completed, the drilling results are pending and are expected to be returned in adequate time to refine scheduled RC drilling of the palaeo-surface gold geochemical targets.

The Company informed that the palaeo-surface aircore drilling is necessary to provide better anomaly definition before RC drilling, but will be considered later and is expected to deliver more significant results.

The Company is about to begin with the RC drilling program this week, which is designed to improve and/or upgrade existing open pit Mineral Resources before completing an updated pre-feasibility study in the June 2020 quarter and revisiting the Sandstone project recommissioning decision.

Both the aircore and RC drilling represent the first programs of the significant multi-phase drilling campaign, consisting of at least ~20,000m of drilling. The Company will report the progressive results of the drilling programs on a continuous basis.

Middle Island has also planned to undertake further RC and diamond drilling programs late in the March quarter if required. These programs are targeted:

To access significant additional exploration funding for this major exploration and resource definition drilling campaign, the Company also announced a fully underwritten Entitlement Issue, which will close on 12 February 2020.

With the AUD gold price close to record levels, Middle Island expects any additional Mineral Resources determined during the drilling campaign to considerably improve the outcome of the project’s updated PFS (Pre-Feasibility Study). The Company expects the PFS update to result in an encouraging gold mill recommissioning decision.