The renowned Australian gold explorer, Middle Island Resources Limited (ASX: MDI) is well on track to advance its flagship, Sandstone Project towards production. Some days down the line and the production from the Sandstone Project will become a reality.

Towards this end, the Company has planned to conduct a pro-rata, fully underwritten, non-renounceable Entitlement issue to raise gross proceeds of about $2.35 million (before costs) on the basis of one New Ordinary Share for every two Ordinary Shares held on the record date, at an issue price of $0.004 per Share. The Company has received strong shareholder and investor support to undertake the Entitlement Issue.

Under the Entitlement Issue, each participant will be issued one Option for every one Share subscribed, on the same terms as the existing series of unlisted Options on issue (with a $0.008 exercise price, expiring January 2022).

The Entitlement Issue replaces the Tranche 2 of the original Placement announced by the Company in November this year, which was corner stoned by prominent mining investor Mr Stephen Copulos. The Company has replaced Tranche 2 Placement with a larger Rights Issue to allow longer-standing MDI shareholders the opportunity to participate on the same terms. It has successfully secured the additional financial support of new significant shareholders associated with Mr Copulos, to pursue the revised approach.

The Company notified that Mr Copulos’ voting power in MDI is likely to increase from the existing 6.51 per cent to approximately 13.59 per cent on an undiluted basis, conditional on the level of acceptances by eligible shareholders.

MDI has planned to use the increased funding to enhance the open pit Mineral Resources to boost the development of its Sandstone Project. The Company has recently confirmed the presence of at least 15 open pit gold targets with the potential to substantially improve Mineral Resources contributing to a stand-alone recommissioning decision at the project. The Company’s key objective is to recommission its fully owned Sandstone processing plant, kept on maintenance since September 2010.

The identified open pit gold targets are situated on MDI’s 100 per cent owned 191km2 permitted Sandstone tenure, within 4km of the processing plant, presenting an opportunity to swiftly contribute additional open pit Mineral Resources in advance of the recommissioning decision and the PFS (Pre-Feasibility Study) update.

The Company has decided to postpone the PFS till it conducts an aggressive reverse circulation (RC) and aircore drilling campaign, scheduled to begin early in January 2020. The Company intends to complete the drilling campaign to convert historic mineral resources and evaluate new targets within the permitted Sandstone tenure in 1st quarter of 2020.

Following the receipt, compilation, quantification and optimisation of the new drilling results, the PFS update is expected to recommence in the June quarter of 2020. 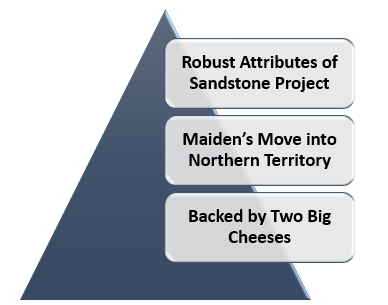 The Company’s Sandstone Project is supremely placed, with the following attributes:

As per MDI’s Managing Director, Mr Rick Yeates, “The Company is looking forward to adding additional open cut Mineral Resources generated by this substantial drilling campaign to greatly enhance the economics of recommissioning the Sandstone gold processing plant, with a replacement value that is multiples of the refurbishment cost estimate $10.3 million, on a standalone basis and significantly increasing value for MDI shareholders.”

The Barkly Super-Project is an investment opportunity for MDI, carrying the following traits:

The exploration is anticipated to commence in 2020 dry season at the project.

Recently, a highly experienced mining engineer, Mr Brad Marwood and a renowned investor, Mr Stephen Copulos, got connected with the Company to drive the development of Sandstone Project. Mr Marwood has brought an extensive 30 years of experience in operational, managerial and corporate areas to the Company.

According to Mr Yeates, Mr Copulos and his team have also provided strong endorsement of MDI’s strategy and vision to consolidate the wider Sandstone district. 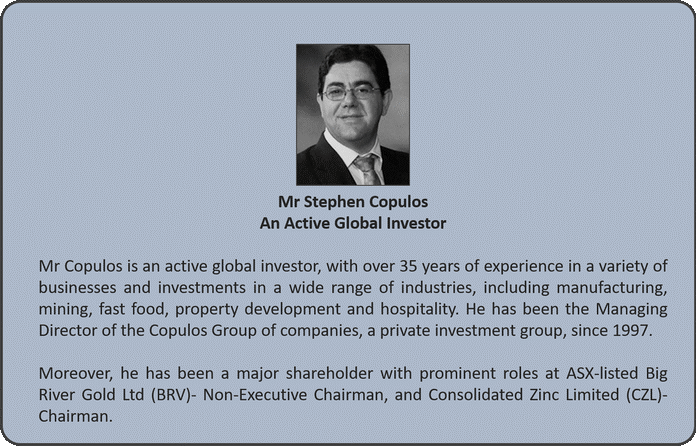