Amidst the phase of continuing financial and political uncertainty across the world, investors consider gold as a safe haven that protects them against equity market turmoil. For several centuries, gold has been acknowledged as the ultimate means of storing and trading wealth worldwide. Besides acting as an insurance to protect wealth, it serves as an excellent way to diversify investors’ portfolio.

Moreover, the price of gold has improved considerably over the last 50 years, making it a sought-after commodity for investment. The commodity has delivered a return of about 19 per cent during the last year. 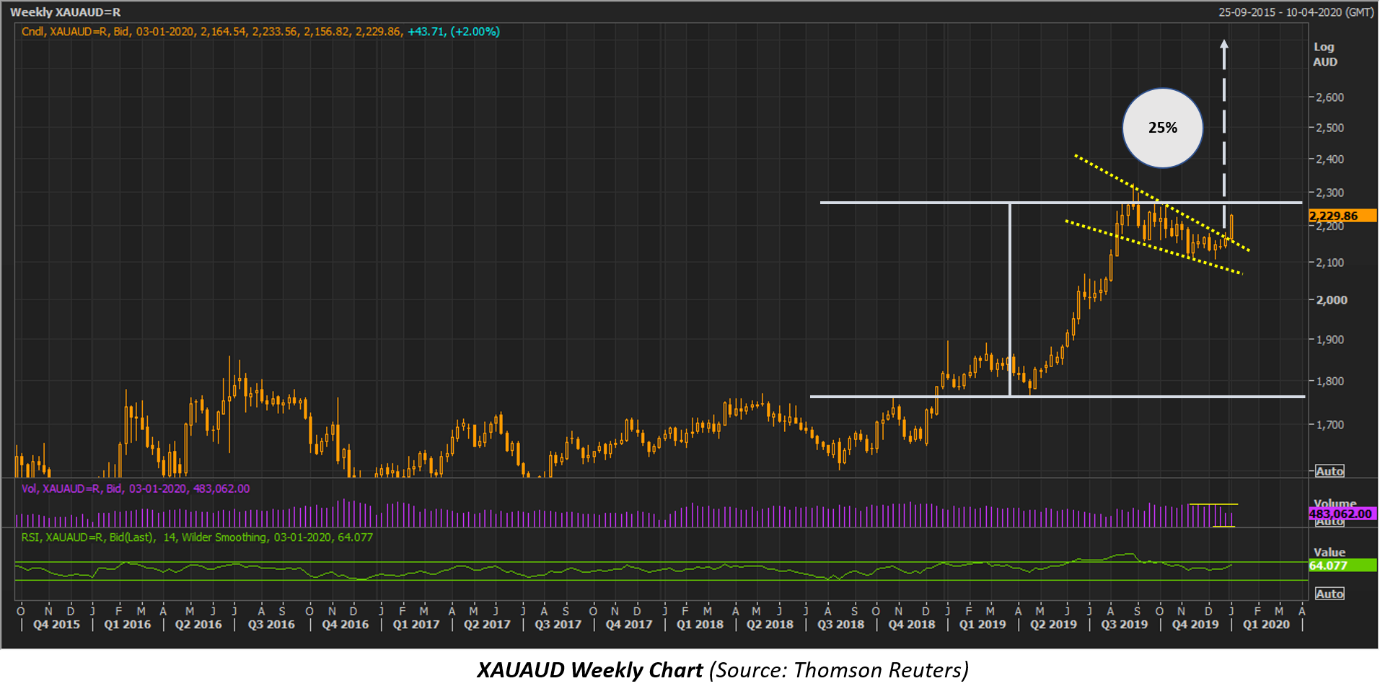 The technical analysis demonstrates that gold entered 2019 after a sound consolidation in 2018, with a breakout in February 2019. The price of gold continued to rally post the breakout, crossing the mark of $2,000 in June and reaching a multiyear high-level of $2,322 in September.

As shown in the weekly chart, the gold spot has broken out of a bullish flag. The chart pattern suggests a further 25% up move in the gold prices.

As the gold market closed 2019 on a positive note, the gold exchange-traded fund - World Gold Council (WGC) expects solid investor demand to support gold prices through 2020. The projections are based on risks in global financial markets that have diminished but not yet disappeared.

Although the US President, Mr Donald Trump has recently notified that he will sign the much-awaited trade agreement with China on 15th January 2020, it is still unclear if the agreement will foster the US economic growth.

Moreover, WGC expects this year to be an extremely volatile year for the gold market, with central banks continuing to remain as the net buyers of gold.

WGC’s recent outlook is in line with its mid-year outlook for 2019, in which its experts projected a growth in gold investment demand, supported by:

With gold prices confirming bullish chart breakout, the companies in the gold space seem to have tremendous opportunities ahead. One such company which is highly expected to benefit is Middle Island Resources Limited (ASX: MDI), an Australia-based gold explorer which operates on the belief that gold prices will strengthen over the time.

Middle Island is exploring golden frontiers, with a major focus on its flagship Sandstone gold project, located 11km to the south of Sandstone and 400km to the North-West of Kalgoorlie. The company’s primary ambition is to recommission its 600,000tpa Sandstone processing plant (kept on care and maintenance) as early as possible.

The refurbishment cost has been estimated at $10.3 million, while the time period to revamp mill & infrastructure has been assessed as five months.

To contribute to its stand-alone recommissioning decision, the Company has decided to undertake an aggressive aircore and reverse circulation (RC) drilling campaign this month, followed by a PFS update in June 2020 quarter.

Moreover, it has received strong shareholder support to conduct the Entitlement Issue to stimulate the development of its Sandstone project.

In addition to making substantial progress at its flagship progress, the Company has also obtained first-mover advantage in Northern Territory by identifying a high-grade Barkly Cu-Au Super-Project. The Company has decided to start exploration in 2020 dry season.

The prevailing gold situation seems favourable for Middle Island to deliver on its 2020 targets, backed by strong management team and all-encompassing strategy for the development of Sandstone project.

Take a Look at MDI’s Glorious Journey of 2019 Here