Insight into Glorious Journey of Middle Island Resources in 2019

In the buoyant Australian gold market, emerging gold explorer, Middle Island Resources Limited (ASX: MDI) is progressing rapidly with its flagship, Sandstone Gold Project. The company’s primary ambition is to recommission its 100 per cent owned processing plant at Sandstone, which has been kept on maintenance since September 2010.

The Sandstone processing plant is MDI’s key asset, with the fully compatible CIP processing plant supported by a laboratory, fuel tanks, workshops, mine offices, and a substantial inventory of spares & equipment and a contracted diesel-generated power plant.

Focussing on its Sandstone Gold Project that has considerable additional exploration upside, Middle Island created an all-encompassing strategy that incorporated the following components: 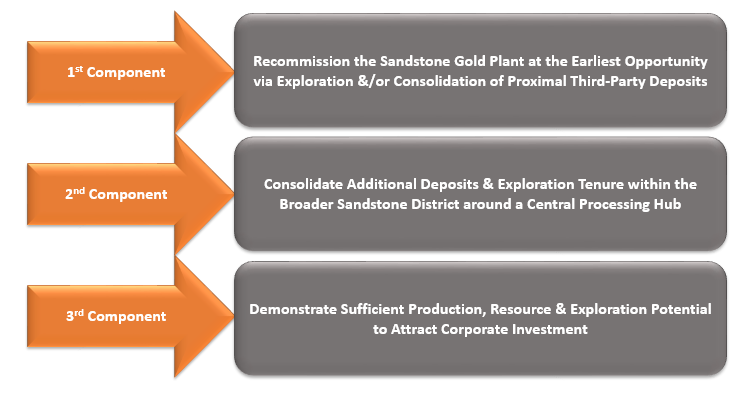 The company has so far made sizable progress in line with its comprehensive strategy, with 2019 being a remarkable year for Middle Island, during which it made significant strides. 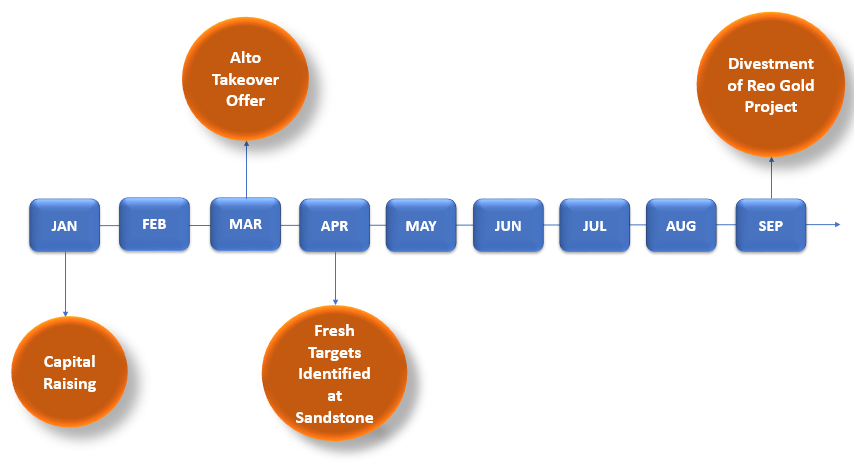 In January this year, at a time when numerous small cap resource companies’ fund raising programs were falling short of target, Middle Island closed its $1.4 million Entitlements Offer and the issue was over-subscribed.

Demand for the Entitlements Offer and Shortfall Shares surpassed the available number of shares, showcasing a resounding vote of confidence by the shareholders. The company informed that around 70 per cent of the register, including all Directors, took up their full entitlement while 50 per cent applied for the shortfall.

Use of funds: The proceeds were primarily used on key activities at the Sandstone Project, specifically,

In compliance with its initial component of the comprehensive strategy, the company put forward an all scrip off-market takeover offer for ASX-listed Alto Metals Ltd (ASX: AME) in March this year. Under the Offer, MDI notified about its plan to acquire 100 per cent of the issued voting shares in AME by offering 5 ordinary shares of MDI for every 1 share of AME, valuing Alto Metals at $9.4 million.

However, in June 2019, the company adopted a strategic approach and extended the premium for AME shareholders by offering 6 ordinary shares of MDI for every 1 share of AME. On 23 September 2019, the all scrip off-market takeover offer closing date was extended to 29 November 2019.

AME’s mineral resources are located within 30 kilometres of Middle Island’s Sandstone gold processing plant. In case the takeover offer gets successful, the company will integrate Alto’s assets with its Sandstone project and will instantly start an updated feasibility study, embedding AME’s Mineral Resources, to validate the economics of recommissioning MDI’s processing plant based on the combined Mineral Resources.

In April this year, the company reported encouraging exploration results from the geochemical aircore drilling conducted on several defined Weights of Evidence (WoE) targets within the Sandstone project. The company informed about the identification of new gold targets at the southern end of the Sandstone gold project, close to five known deposits

The gold anomalies were found under a significant blanket (5-15m) of transported sheetwash cover that had hindered the previous exploration. 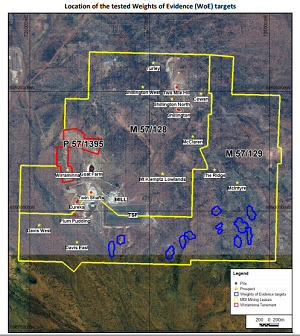 Three significant, cohesive gold anomalies with a minimum strike length of ~160m, with peak values of up to 337ppb Au were defined. Each of the anomalies were in accordance with those defining high grade, nearby open pit deposits that have been processed and mined.

All gold anomalies linked with the WoE targets were defined on permitted Mining Leases and within 2.5 kilometres of the Sandstone processing plant. Each of these new WoE targets boosted the potential of a mill recommissioning decision, consistent with the company’s primary objective.

The company mentioned that the previous success at the project’s Davis prospect and correlation between the orientation and position of the anomalies provides considerable confidence that the further 18 WoE targets (which are yet to be tested) are likely to generate similar anomalies.

In order to focus entirely on the advancement of its Sandstone Gold Project, Middle Island has divested its 100 per cent stake in the Reo Gold Project to Tajiri Resources Corporation for USD 335,000 and 5 million fully paid Tajiri ordinary shares. The Reo Gold Project situated in Burkina Faso, West Africa, was sold after Tajiri exercised its option to acquire the project.

The divestment was completed in September 2019 after Tajiri made the last payment of Option Extension and Exercise Fee of USD 150,000 to MDI. 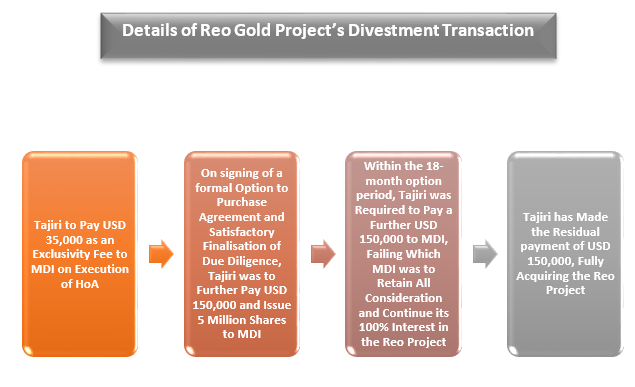 The transaction structure enabled MDI to retain exposure to the Reo project via Tajiri shares and a residual 2 per cent net smelter return, which Tajiri can acquire at any point for USD 5 million. This would allow MDI’s shareholders to hold a sizeable indirect share in the upside potential of Western Africa-based Reo Project.

One can deduce that Middle Island has achieved significant milestones in 2019, backed by its spectacular strategy and advanced Sandstone project. The company seems to be well-positioned to become the leading gold explorer of Australia in the near future.

Gold as an asset class has performed remarkably well in 2019. On the daily chart, we can notice that gold prices have been moving in an uptrend, and the price actions witnessed a positive crossover of 21- and 200-days exponential moving averages in December 2018.

Post the positive crossover the prices rallied consistently till February 2019 and consolidated thereafter in a bullish flag pattern. Gold prices broke out of the flag in May 2019 to reach a record high of USD 1,557.09 on 04 September 2019.

MDI followed the gold trend, and the stock price of the company surged to move in a short-term uptrend since the onset of July 2019.

The prevailing gold scenario adds to the positive case for MDI that aims to achieve a magnificent growth trajectory in the mid- to long- term.