With just a few days left for the much-awaited RIU Explorers Conference, Australian gold explorer, Middle Island Resources Limited (ASX:MDI) is all set to mark its entry into the event. The conference, that has been drawing an overwhelming response from the mid-cap and junior resources industry for the last 18 years, is about to return in Fremantle, Western Australia on 18th-20th February 2020.

After delivering a solid presentation in last year’s conference held in February 2019, Middle Island is attending the event much stronger than ever. Within a year, the Company has made a tremendous progress towards strengthening its position in the resources sector.

As we near 2020 RIU Explorers Conference, let us gaze through the five key milestones achieved by the Company since the previous conference: 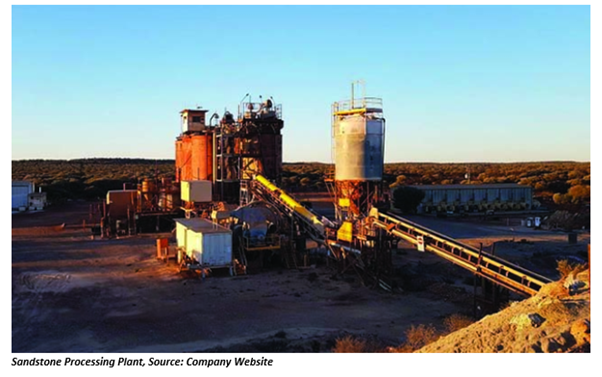 Middle Island has made substantial progress at its Sandstone project, with the commencement of a major 17,4000m open pit drilling campaign in January 2020, that would significantly enhance the outcome of the updated PFS, leading to a positive recommissioning decision once completed.

The results of the drilling campaign are expected to be released in March 2020 quarter.

The drilling campaign was commenced following a detailed technical review of the open pit exploration opportunities undertaken within the Sandstone tenure and a re-optimisation of open pit gold deposits undertaken at the project.

The processing plant, which is estimated to be refurbished at a cost of $10.3 million within 16 weeks from the commencement of site works, provides an upper hand to the Company as designing and constructing a new processing plant of the same capacity would cost ~$60 million and take at least 12 months.

The Company is expected to take a recommissioning decision soon after the completion of the updated PFS in the June 2020 quarter.

The Company has secured a first-mover advantage in the iron oxide-copper-gold (IOCG)-prospective, East Tennant area, with the identification of a new project – the Barkly Copper-Gold Super-Project – in NT.

The Company applied for 10 exploration licences within the East Tennant region, out of which six applications have been accepted while the rest four are currently the topic of partially or wholly competing applications lodged by numerous companies. 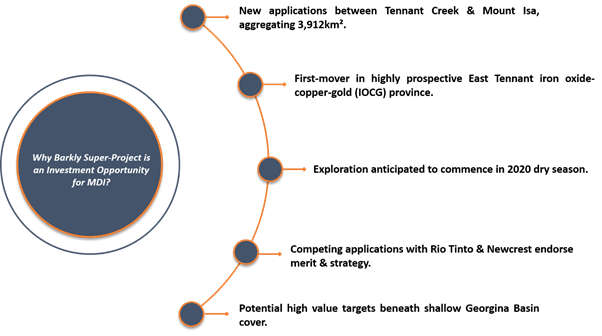 The Company announced a two-tranche placement to raise up to $1.04 million in December 2019, which was made to new unrelated professional and sophisticated investors.

Following the completion of Tranche 1 Placement, the Company and its new substantial shareholders cancelled the Tranche 2 Placement by mutual agreement. Subsequently, the Company announced a pro-rata, non-renounceable, fully underwritten Entitlement issue to raise about $2.35 million. The combination of committed capital and cash at bank sees the Company starting 2020 with ~ $2.8 million.

The opportunity to access significant additional exploration funding via the fully underwritten Entitlement Issue, resulted in a major exploration and resource definition drilling campaign recently commenced by the Company.

The renowned investor, Mr Stephen Copulos corner-stoned the Company’s placement activity announced in December 2019, for advancing the Sandstone Project towards gold production. He provided a strong endorsement of the Company’s strategy and vision to consolidate the wider Sandstone district.

He brought 30 years of development, operational, management and corporate experience to the Company, having participated in the commissioning and/or construction of around 26 projects worldwide, including Australia.

In a nutshell, the Company is well on track to progress with its planned transition from WA gold explorer to gold developer/producer, backed by its strong management and solid financial position. It is no doubt hitting the 2020 RIU Explorers Conference on a stronger note.