What is WTI Crude Oil? 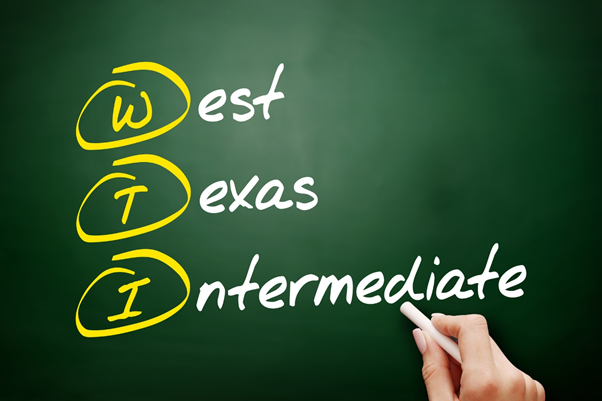 The formation of crude oil takes millions of years. As per the widely accepted theory of petroleum generation, plant and animals' remains get deposited under the sediment cover. With time, the organic matter from plant and animals gets converted into petroleum with induced pressure and temperature.

The demand for light and pure crude oil is relatively more in the international market than other crude oil benchmarks. WTI is the lightest and sweetest for crude oil primarily explored from Texas, North Dakota and Louisiana and transported to Cushing, a major spot for oil.

Which are the other key crude oil benchmarks? 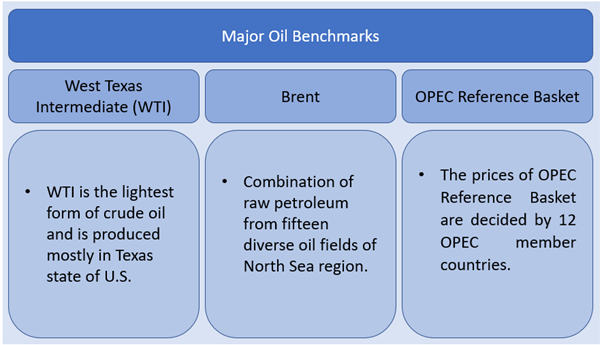 Brent is produced from the oil fields of the North Sea. It is the second lightest type of unrefined petroleum. Brent is formed by the blend of four crudes, the Forties, Brent, Ekofisk and Osberg. The third one is the OPEC Reference Basket, the weighted average price of petroleum blends produced by OPEC nations.

The massive difference between Brent and WTI is the source from where they start. WTI crude oil is found in the US landlocked oil fields, while Brent crude is produced from the North Sea fields, hence accounts for relatively fewer transportation costs. Brent is relatively priced higher than WTI because the WTI benchmark is limited to the US, whereas Brent crude benchmark is followed by two-third of the world for trading. Recent technical advancement like horizontal well drilling and hydrofracking also contributed to the price variation.

However, the price trend used to be the opposite before the US shale oil revolution. The prices of WTI used to be higher than Brent crude.

Why is WTI priced lower than Brent?

Theoretically, WTI is lighter and sweeter than Brent so, it must be priced higher, but actually, a vice versa situation is noticed in the market. WTI futures contracts have to be settled physically and expire each month. The buyers need to take the delivery from the Cushing. Numerous buyers don't have a storage facility, and they directly sell the incoming crude in the market. During the low demand phases, like during the COVID period, the demands were extremely less, and there were no buyers in the market. All the Cushing storage were full, and buyers were not taking the delivery, so the sellers were selling the WTI crude at remarkably lower prices. However, the case is not valid with Brent crude. Hence, the prices of WTI crude are more volatile than Brent crude.

Another important factor is Brent is settled in cash. Any investor can hold the contracts beyond their expiry as an added advantage, and no one forces to sell them.

Apart from this, WTI crude is extracted from landlocked areas hence require extra transportation cost for storage. In contrast, Brent is extracted from fields present in the North Sea; it can be directly stored in the carriers or instantly transported.

What happened to WTI Crude Oil prices in April 2020:

The May delivery contract of WTI crude oil futures fell more than 300 per cent at negative US$37.63 per barrel in April 2020. In futures contracts, the buyer pays some money as an assurance to take delivery of a commodity on the day of contract expiry, but if the speculator doesn't intend to take the delivery can exit the position before expiry. Speculators can sell out or reverse out the contract to someone else, or they can roll-over the contract by buying contracts for one of the coming months.

However, if the speculator decides to keep the contract, they have to take the physical delivery from Cushing, Oklahoma, on expiry. The oil glut situation arisen by the worldwide lockdown has resulted in a shortage of storage space. Since all the storage space around the globe were full, storage cost for offshore and onshore have soared in the particular month, with tankers costing around US$165,000 per day.

WTI and Brent's prices started to diverge first in 2011; however, they again converged in late 2014. The other major divergence was observed in 2020 when WTI went into negative territory. There are various reasons which are considered to be responsible for the divergence. Some believe that a glut of WTI crude is the main reason for divergence, whereas others believe that depletion in the North Sea's Brent oil is the main reason for divergence. However, the lack of supply measures of WTI crude from landlocked areas prompted Brent to be adopted as the leading oil benchmarks even on the US and Canada's east coast. WTI crude is transported on rails which is relatively more expensive than by pipelines.

WTI crude oil is traded on the Chicago Mercantile Exchange (CME) under the ticker CL.