Hydraulic Fracturing, commonly known as hydrofracking or just fracking is a process of extracting oil/gas from the earth. Fracking has been a bone of contention during election season in U.S.A and other geographies. However, it remains the talk of the town during steep price movement of the crude oil. Many believe that hydraulic fracturing (HF) may cause earthquakes and demand complete ban on the HF operations.

Let us first discuss the basic process of hydraulic fracturing.

When oil and gas wells are drilled, the well needs further stimulation to start the production and achieve the planned productivity. Perforation of the casing or liner is done to connect the wellbore and hydrocarbon reservoir. Perforation involves high-velocity projectiles which puncture the liner/casing wall. The debris from the perforation may enter the nearby reservoir formation and can choke or impair the permeability of the formation.

Every hydrocarbon-bearing formation has some degree of porosity and permeability. Porosity is the measurement of the total void space available in a rock. These void spaces store the hydrocarbon hence higher the porosity; higher will be their capacity to hold hydrocarbon.

Permeability is the interconnection of the pores or void spaces in the rock. If the voids are not connected, then the fluids in the rock will to not flow and will remain stored. In order to extract hydrocarbon, reservoir rock should have good porosity and permeability.

The primary goal of HF is to increase the productivity of a well by superimposing a highly conductive structure onto the formation. This is done by creating and extending a fracture through the perforation holes deep into the formation. The process causes an increase in the surface area for the fluids to flow into the well. 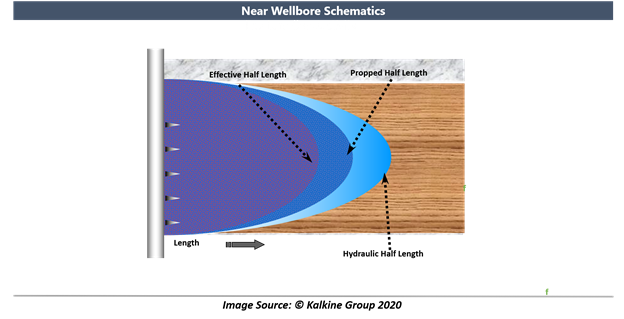 Now creating a flow channel can be done by injecting fluids at high pressure to cause a fracture in the formation. Proppants (solid material, usually sand) are then pumped which enters and occupies the fracture region and provide rigid support so that fractures are not closed.

Even the best drilling and completion methods can cause some degree of near-wellbore damage in most wells. The damage done to the near-wellbore area is called skin. The additional pressure loss caused by the damage of near-wellbore region is proportional to the production rate. The skin can be thought off as the measure of the quality of a well.

A highly conductive flow path from the reservoir to wellbore is created through hydraulic fracturing which involves below steps:

A fracturing operation requires precise volumetric calculation, and high pressure pumps to deliver the proppant into the reservoir. Generally, a combination of high-pressure pumps is used with interconnected tankers filled with fracturing fluids.

Components of the hydraulic fracturing fluids.

Why Hydraulic Fracturing is so important for Oil Industry?

Where is US shale gas industry headed? Can it fulfil LNG promise to EU?