What are unconventional resources?

An unconventional resource is an umbrella term used in petroleum industry energy resources tapped in reservoirs other than conventional ones. The porosity and permeability of unconventional reservoirs are less porous and permeable and require advanced techniques of exploration. Generally, the extraction of these resources is challenging on both technical and economic grounds. Still, gradual technological upliftment and intense global energy demands are paving the way to explore these resources.

EIA recently released its latest International Energy Outlook (IEO), which expects energy demand to grow by nearly half worldwide, between 2012 and 2040. The demand in developing countries will jump by almost 71 per cent while the rise will be ~18 per cent for developed nations. 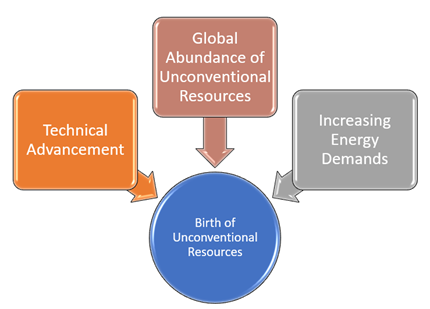 The advancement in technology, including cost-effective methods of exploration and industrial automation, is another factor contributing to the popularity of unconventional resources. The introduction of advanced technology has converted economically & technically challenged reserves into commercially viable reserves. Horizontal drilling and hydrofracturing are some of the important breakthroughs; the petroleum industry has got.

The global resource of tight oil, heavy oil, natural bitumen, and oil shale oil is about 412×109 t combined, and the global resource extent of tight gas, coalbed methane and shale gas are 921.9×1012 m3. North America, South America and Asia are the global leaders having maximum recoverable resources of unconventional oil. On the other hand, Asia Pacific, Russia, and North America are the global leaders of recoverable unconventional gas.

One of the most important breakthroughs in the extraction of Unconventional resource is the introduction of Hydraulic Fracturing technique. It produces fractures in oil and gas-bearing formations with less porosity and permeability, stimulating the flow within the reservoir and increase the recoverable volume. Fractures are created by pumping an enormous quantity of pressurized fluids that mainly contain water and proppants along with some acidizing agents. After the completion of the injection process, the hydrocarbon present in the reservoir is activated by the internal pressure of rock formations, and it starts flowing towards the surface through the wellbore.

The other crucial technique is horizontal drilling which is used to drill a well horizontally. It increases the contact between reservoir and borehole, creating a better production interface in low porous and low permeable reservoirs, which is impossible to achieve in traditional vertical wells.

Both horizontal drilling and hydraulic fracturing and, have opened new avenues for oil and gas development, with an emphasis on natural gas reservoirs, for example, coalbed, shale, and tight sands.

These top 3 NZX financial stocks can be explored in 2022