An oil and gas well with one or more of its sections drilled at an angle of eighty degrees or more from the vertical, for any specific objective, is known as Horizontal Well. It is drilled through a multi-directional drilling technique and used in places where conventionally drilled vertical wells cannot be drilled or otherwise, do not serve the purpose due to the complex shape of the reservoir. 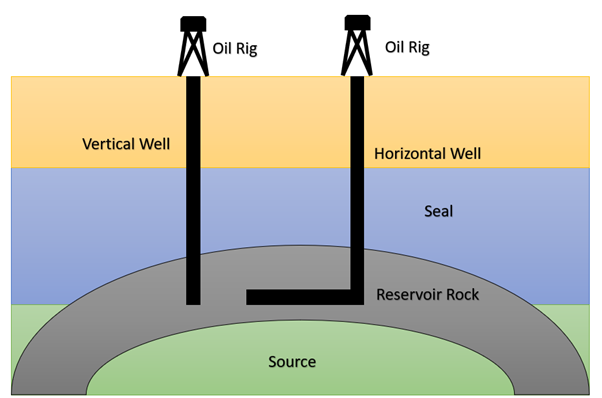 The combination with hydraulic fracturing technique can lead to incredible results with greater success stories like the exploration of Marcellus shale in Appalachian basin and Bakken formation in North Dakota.

Drilling of Horizontal Wells in the mining industry has become more prominent after the successful track record set in the exploration of hydrocarbons during 2010 in terms of economics and efficiency, especially in the U.S.

So, there was a need to rotate the drill-bit autonomously, without rotating the drill-string and a technique to steer the drill bit, to take a look underground.

A big thank you to thrilling technology.

Mud-motors and Rotary Steerable Systems (RSS) tools came into existence as a ray of hope. A mud-motor does not require rotary torque from the rotary table present on the surface. It gets driven by the supply of drilling fluid known as mud. Hydrostatic pressure build by mud rotates the shafts present in mud-motor which ultimately rotates the drill bit.

RSS tools point the drill bit in the desired direction while operating from the surface along with Measurement while Drilling (MWD) tools which give the information about direction and inclination of the bit.

The process of horizontal drilling involves drilling of a conventional vertical well to a certain depth and then bending the trajectory of the well to make it nearly horizontal. Usually, horizontally drilled footage overpasses the vertically drilled footage in these types of wells.  Horizontal well allows more of the segments of a borehole to remain in contact with the paying zone or producing formation, increasing the yield of oil and gas.

As per EIA accounts, hydraulically fractured horizontal wells contributed 69% of total O&G wells drilled in the U.S. in 2016. 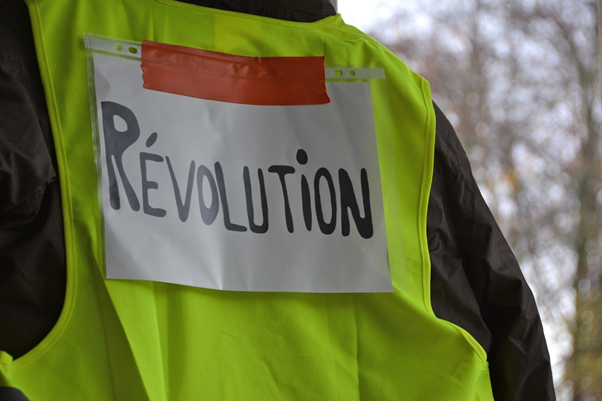 The “Shale Revolution” of the U.S. is driven by the combination of hydraulic fracturing and horizontal drilling which significantly increased the production of oil and natural gas from tight oil formations that accounts for about 36% of the total U.S. crude oil production. These deposits were inaccessible to traditional vertical wells due to limited contact of the wellbore in low porous and low permeable producing formation.

Even the per foot cost of drilling a horizontal well when combined with hydraulic fracturing is around three times more than a conventional vertical well. Still, they are preferred due to higher efficiency and production yields.

Enlisted below are some of the significant reasons for drilling a horizontal well: 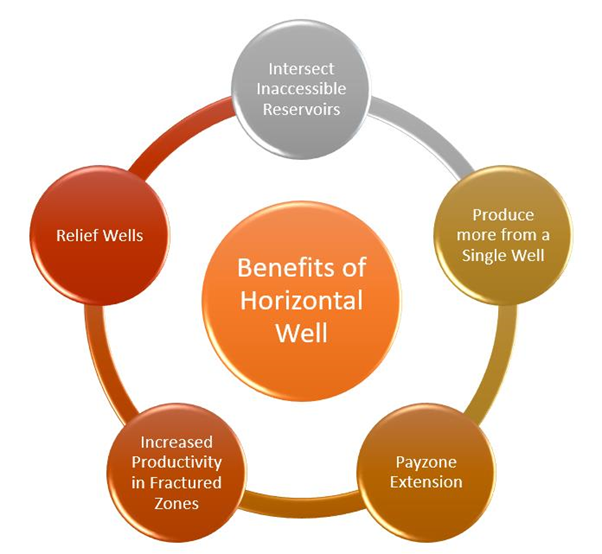 There are cases when the oil and gas reservoir is located just below the monument, park or a city’s prime location from where drilling a vertical well is nearly impossible. In this case, recovery from the reservoir can be made using a horizontal well drilling set-up.

Produce more from a single well:

This strategy has been used to reduce the surface impression of drilling activity. Recovery can be made from a broader zone using a single drilling pad by dodging the drilling of multiple wells, thereby reducing the drilling cost.

As compared to vertical wells, horizontal well provides better contact between a borehole and producing formation. Increase in the extent of pay zone will lead to more fluids flowing into the well, increasing the productivity.

Production yield in a fractured reservoir can be attained by drilling a well in a manner that it can encounter the maximum number of fractures to increase the flow of fluid into the borehole. A limited number of fractures can be intersected using a vertical well.

A relief well is a well that is drilled to control the sudden explosion of O&G in a well. A wild well is killed by intersecting it near its source to pump mud and water from directional relief well.

Should You Take A Personal Loan To Invest In Stock Market?

Violators Under Watch as Government Plans to Resume International Holidays

Which clean energy hot stocks to watch out amid $1 billion energy deal?

Which are the ten best-suitable countries for renewable energy investment?

Can TSX Energy Stocks Be Fueled By A Likely Oil Boom?

US Fully Vaccinates 35% Of Its Citizens; 58.7% Receive Single Dose