What is Brent Crude?

Brent crude or Brent blend is among the two most significant crude oil benchmarks used globally for trading. Sometimes, it is also known as Brent oil or London Brent. It is referred to as sweet because of its low Sulphur content and light because of its low relative density. Brent crude is used to price around seventy-five per cent of the globally traded oil supplies.

To understand Brent crude's insights, one must first understand the basic extraction process related to oil exploration. Oil is explored from the subsurface reservoirs using the drilling technique. A hole is drilled into the reservoir's depth to puncture it and extract all the deposited crude oil with a pipeline to the surface. The extracted oil is not present in its purest form and needs to go through various stages of refining for further use as an end product.

The amount of impurities present in crude oil is directly related to the age of maturation, depth, type of source material, and reservoir rocks. With a higher level of impurities, the crude oil becomes sour; however, it becomes sweet in case of fewer impurities. Sour oil corrodes the equipment, storage tanks and pipeline through which it comes in contact during transportation and storage. Sweet oil has a higher commercial value as compared to the sour oil.

Brent oil is extricated from the oilfields present in the North Sea between UK and Norway. The name “Brent” comes from Brent oil fields which ultimately follows the naming convention of Shell UK division, which named all of its fields after birds like Brent Goose in case of Brent.

When was Brent crude first discovered?

Brent crude was first discovered in 1859 in Atlantic Ocean’s North Sea. The commercial exploration was started in 1966, which was further developed in the early 1970s to ramp up the exploration activities. After the oil pipeline construction in 1975,  Brent crude oil began to be transported to the Saloomwoo oil terminal in Britain for refining.

Which are the other key crude oil benchmarks?

Mostly produced in Texas, US, WTI is the lightest form of crude oil and is best for gasoline production. On the other hand, the OPEC Reference Basket is the average price index formed by the average crude oil price of 12 OPEC member countries. 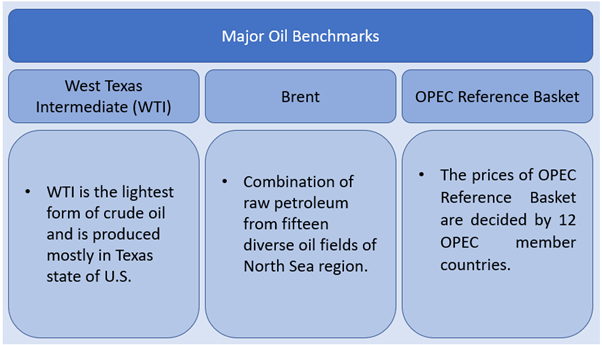 The significant contrast between Brent and WTI is the source from where they begin. Brent crude is produced near the sea, hence accounts for relatively fewer transportation costs. WTI, on the other hand, is sourced from oil fields in the US. Apart from this, another major difference between both the benchmarks is their prices. WTI witnesses a lower impact of geopolitical issues in its prices because of the landlocked location of exploration. In addition to that, the price of WTI crude remains slightly lesser than the Brent crude due to the recent technological advancements in the exploration of US shale oil.

However, the price trend used to be opposite before the US shale oil revolution, the prices of WTI used to be higher than Brent crude.

The crude oil commodities begin trading in futures after the 1970 OPEC crisis. Brent futures are traded on the New York Mercantile Exchange (NYMEX) and Intercontinental Exchange (ICE). One contract of Brent futures contains 1,000 barrels of oil.

TSX in green as IT & industrials gain, commodities down

5 ASX-listed stocks that are on a rebound post slump