What is meant by the Wage Price Spiral?

The wage-price spiral is a macroeconomics theory that explains how an increase in earnings affects the pricing of commodities. When wages rise, so do the prices of commodities, which rise in tandem. The wage-price spiral illustrates the causes and effects of inflation. Hence It is also sometimes called the inflationary spiral. It is explained as the spillover effect of the nominal adjustments running parallel in the labour and goods market. 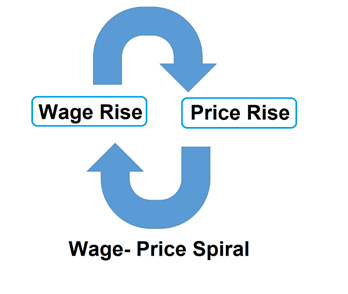 How does an economy step into a wage-price spiral?

As future expectations about inflations persist, demand for higher wages continues- this again induces further price rise- this is the spiralling effect that can lead to prolonged inflationary pressure in an economy.

Theoretically, the lesser the flexibility in real wages in relation to demand, the more slowed will the process be towards nominal adjustment for full equilibrium. The output fluctuations, too, would last longer. The nominal adjustments start the upwards spiral, as explained in the diagram below. Slowing down and stopping this is possible only when real money balances circulating in the economy are suitably altered.

How can economies combat the wage-price spiral?

Even if wages increase in the economy, the economy doesn't need to run into an inflationary trend. There are ways to help this. When wage increase is backed by an equivalent or higher increase in productivity, the firms can cover up for the increased cost of production without actually raising the prices of their goods. Similarly, if an economy reels under cost-push inflation, governments or central banks could impose measures to support producers sustain their profit levels. As a result, the prices would not rise, and the demand for higher wages would not arise in the first place. It is also an option for the central banks of the economies experiencing inflation to reduce the purchasing power of the public by decreasing their level of disposable income. This can be done by increasing interest rates to increase the cost of borrowing or by increasing taxes to reduce disposable income in the public's hands.

How does the wage-price spiral work? 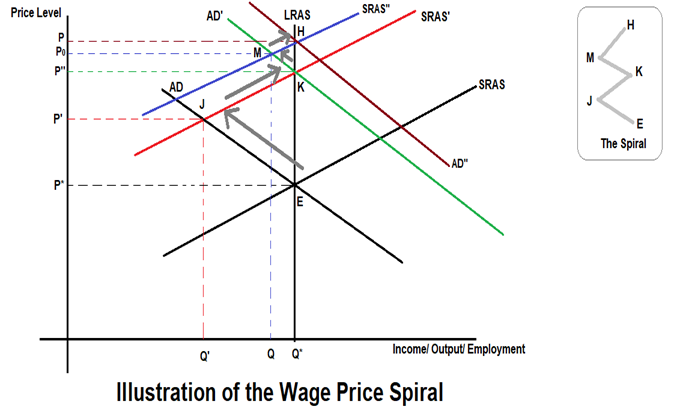 In the diagram, initially, the economy is at point E corresponding to output level Q*, which is the full-employment output. Here prices are at level P’. When wages increase in the economy, the increased cost of production and the simultaneous motive to sustain profits, aggregate supply in the economy decrease due to the suppliers reducing production. The short-run aggregate supply curve shifts leftwards from SRAS to SRAS'- prices rise to P' and GDP and employment fall to Q'. Now the economy has moved from E to J. Because of the increased unemployment, the government will provide stimulus packages to boost aggregate demand. As a result, aggregate demand rises from AD to AD'. The economy has reached point K, corresponding to full employment output and increased price level P''. However, there is a demand for further wage hike due to increased inflationary pressure. Again the same cycle repeats where AS decreases further from SRAS' to SRAS''- prices rise further to Po and again employment falls below full potential to Q. The increase in employment triggers government move to boost demand in the economy- aggregate demand curves shifts further from AD' to AD". Thus prices rise further to level P while output plummets to the full employment level. In this way, the spiral continues, and the cyclical cause-effect relationship causes persistent inflation. There is a constant interaction of cost-push and demand-pull inflation factors in a wage-price spiral shown in the diagram as the movement from E to J to K to M to H.

Why is it essential to control the wage-price spiral at the earliest? 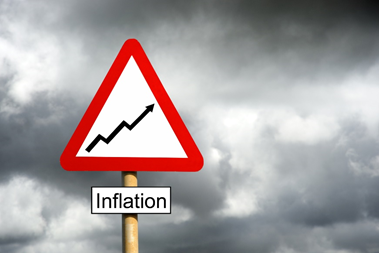 The wage-price spiral inflicts a lot of inflationary pressure on an economy- This leads to various ill effects like an increase in shoe leather costs and menu costs. When inflation rises, nominal interest rates on bank holdings increase. As a result, people hold less in cash and visit banks often for withdrawals- the cost of making such trips is called show leather cost. On the other hand, menu cost is the cost of updating the listed prices each time inflation increases. In addition, the uncertainty associated with prices disrupts efficient resource allocation on the producers' side and creates inconvenience in planning their living on the consumers' side.