What are the different types of tight monetary policy measures?

Quantitative methods of credit control are the strategies employed by the central bank to impact the total volume of credit in the banking system. These measures govern the financial sector's ability to lend, and the methods employed are applicable across industries.

Qualitative methods, also called selective methods, refer to the procedures employed by the central bank to regulate credit flows into specific sectors of the economy. Unlike quantitative approaches, which impact overall credit volume, qualitative methods affect the composition of credit in the economy rather than its amount.

What are the various tight monetary policy measures used in an economy?

To control the rising inflation, the government may use open market operation. The government sell securities to banks and the general public. As a result, there is a reduction in the bank reserves, and people lose liquidity. With the decline in reserves, the lending capacity of banks is lesser- this brings down the level of money supply in the economy.

Another monetary policy measure to curb inflation is bank rate adjustment. The bank rate is the rate at which a country's central bank lends to the commercial banks.  When price levels are soaring in the economy, the bank rates are increased- this reduces the liquidity available with the banks by increasing the cost of borrowing. It also becomes a disincentive to borrow more. As a result, credit availability in the economy declines. In response to the increase in bank rates, the commercial banks too increase the rate of interest at which they lend to the public. When borrowing becomes costly, the consumption and investment spending components of the economy’s aggregate demand decline. This decline is also because savings will now look more incentivising due to the increased rate. Due to the increase in the opportunity cost of spending, consumption is controlled by the public. This helps to curb the inflationary pressure that the economy is facing. In addition, interest rates increasing cause hot money flows into the economy due to better savings rate- the exchange rate of the economy thus improves. The exchange rate improvement makes imports cheaper and exports costlier, leading to a leftward shift in the aggregate demand curve. 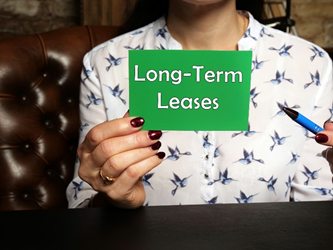 All commercial banks need to maintain reserves beyond which it is not allowed to lend. The central bank uses this statutory requirement and increases the reserve ratio when the economy needs a tight monetary policy. As a result, the lending capacity of the banks is reduced and the credit availability in the economy also declines. Furthermore, due to the positive relationship between credit availability and aggregate demand, the general price levels in the economy begin to fall.

The method of credit rationing too can be used as a tight monetary policy. In this method, credit limits are set for some selective sectors instead of the whole economy. Such policies too can curb the economy's inflationary position.

How does a tight monetary policy impact the economy?

Tight monetary policy helps to bring down the general price levels in the economy. It can be explained with the help of the diagram given below- 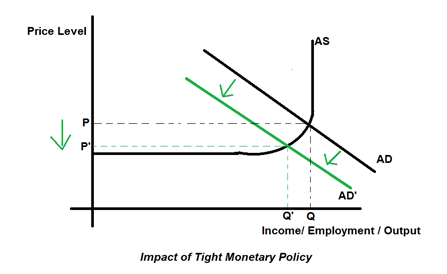 Initially, the general price level in the economy is at level P. When tight monetary policy is introduced, the aggregate demand declines from level AD to AD'. As a result, inflation in the economy declines by PP’.

Why is it essential to employ tight monetary policy measures in the economy?

Inflation hurts economies because it affects investments and company decisions. Firstly, increasing inflation expands the gap between nominal interest rates and real interest rates.  Secondly inflation reduces people's financial savings. Third, producers and suppliers may not release the stock commodities in anticipation of future price increases. Finally, the greatest risk connected with inflation is that it may spiral out of control, devastating the economy due to hyperinflation. Thus when inflation in the economy is seen rising, it is crucial to control it.

Is tight monetary policy the only possible deflationary measure?

In addition to monetary policies, the government can also employ fiscal policy measures to keep inflation under control. Government can bring down its overall spending and transfer payments to control increasing aggregate demand in the economy. The government can increase even taxes to reduce the overall spending capacity of the people. A mix of these two measures or a combination of tight monetary policy and fiscal policy measures is also helpful in controlling inflationary pressure.

ASX 200 to open flat ahead of RBA’s policy meet; oil prices up