In the simplest form, credit refers to the sum of money that is given to the borrower to carry out an immediate purchase/investment and is repaid by the borrower at a later stage. This sum of repayment generally includes interest payments along with the repayment of the principal.

In accounts, the term refers to a bookkeeping entry that either increases liabilities or decreases assets in a balance sheet.

Sometimes, credit may also refer to a person’s creditworthiness. If someone “has credit” then it can mean that he/she has enough creditworthiness to be issued credit from the bank as and when required. 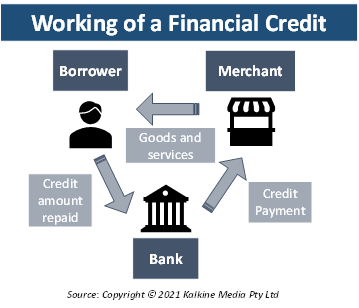 Most common issuers of credit are banks, as they act as a mediator between the buyer/borrower and the seller. Such credit comes along with debt that must be repaid later within a specified period. There are other financial players and intermediaries also available in the market who are involved in credit issue.

A large aspect involved in issuing credit is the trust and credit worthiness associated with the borrower.

How is credit different from a loan?

Credit and loan may sometimes be used synonymously as both refer to a sum of money being lent from one party to another. However, both these terminologies hold certain differences. 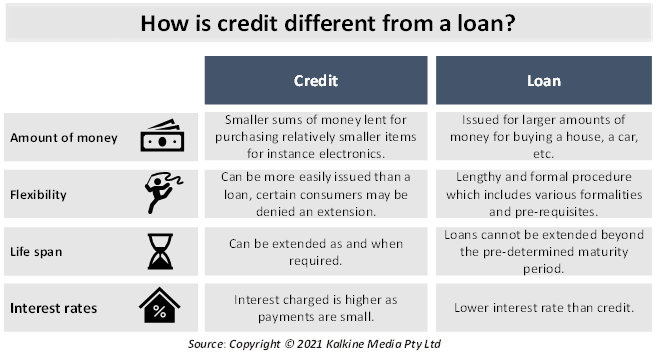 What are the benefits of credit?

What are the types of credit?

Financial credit refers to that credit which is issued by banks and other financial institutions. This is the more common type of credit availed by consumers. The concerned financial institution is the mediator between the borrower and the lender and is responsible for facilitating the transaction.

Non-financial credit refers to an agreement between two parties that involves an exchange of goods and services with a promise to pay for them in the future. This type of a set up allows a consumer to buy now and make the payment later. For instance, consider a local retailer selling everyday supplies. When he agrees to sell a customer a few supplies, knowing that the customer will make the payment in future, then it is also a type of credit.

Deferred payments are quickly gaining popularity among customers as they allow the easy facility of buying a product with no additional costs. Generally, non-financial credit does not involve interest payments. Thus, it incentivizes the purchase for the customer as he/she would not have to pay any amount in addition to the actual price of the goods or services.

How does credit work?

Banks issue these credit cards with a monetary limit beyond which transactions cannot be made. When a transaction is conducted with a credit card, the bank pays the merchant for the goods and services against which the card has been used. However, the card holder must repay this amount, generally along with interest to the bank.

How does credit card function?

Consider a borrower who is issued a credit card with a USD 700 limit. This means that the borrower cannot make purchases that amount to more than USD 700.

Now assume that the borrower makes purchases worth USD 650. This means that whenever the credit card is used to make a transaction, the merchant need not wait for the payment. The transaction is facilitated by the bank at the same instant.

However, if the borrower is unable to repay the credit amount within the bill cycle then his/her credit score would be affected adversely, along with penalties. The outstanding amount is carried over to the next bill cycle, this time with higher interest. Thus, it would become even more difficult for the borrower to repay the amount in subsequent bill cycles.

Net amount after factoring in all debits and credits in a financial repository at a given moment. If an account balance drops below zero, it demonstrates a net debt.

A statement of all the credit and debit activities of an account during a period. The account statements are generally provided on a monthly or quarterly basis.

A report of overdue customer invoices and credit memos. It is an indicator of the financial health of the customers of the company, and regular reviewal of it would enable to track and control the liquid cash flow in the company.

Look At The 7 Most Buzzing Stocks Of The Week

Is It A Good Time To Invest In Dogecoin & XRP?