What is an Acquisition?

Acquisition is a corporate process by which one company gains possession/ownership of either a portion of another company or the entire company.

The acquisition process allows the acquiring company to take over the assets of the target company, along with its business operation. The target company, on the other hand, gets compensation in terms of cash, shares, etc. as stipulated in the deal, orchestrating its exit.

What are the Key Differences between Merger and Acquisition? 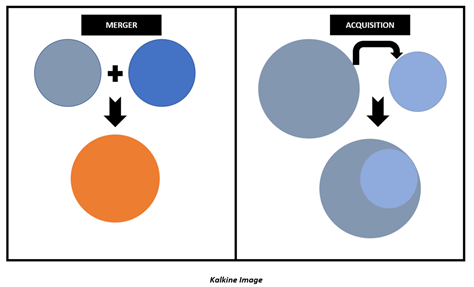 Notably, the term 'acquisition' is often synonymously used with 'merger'. While in actual, they do not represent the same thing.  Below are some of the apparent differences between the two transactions:

What is the Significance of Acquisition?

A company can be motivated by several factors when pursuing an acquisition. The target company is generally encouraged to dispose of its portion of a business or the entire business due to accumulation of debts, spiralling operative performance or lucrative deal offered by some large company. The acquiring company, on the other hand, considers several elements before advancing with the acquisition process.

The objective of acquiring company typically includes the following factors:

Companies eyeing to enter a foreign market often pursue acquisition of a local company in order to reduce the entry barriers. It is considered as one of the convenient ways to outright gaining entrance into the new foreign market along with the established set up. The acquiring company, however, considers the laws concerning foreign ownership before undertaking an acquisition.

The acquiring company often seeks to expand its customer profile or add another target group of customers through the acquisition strategy. It allows them to widen their customers' width or target a niche segment by adding the already existing customers of the acquired company.

Another factor that aids in augmenting the growth rate of the company is achieving new competences and resources. While the addition of competencies may be a cumbersome process for a company demanding ample time, it can cut corners by pursuing acquisition strategy. The corporate transaction can help add technological or other competitive advantages of the target firm as well as provide the company with skilled human resources.

Companies are garnered towards acquisition strategy to boost their earnings and increase their overall profitability. The strategy may provide the acquiring firm economies of scale, which thereby enhances its overall operational efficiency.

The acquisition of another company offering similar products or services overall offers greater command on the market with a higher market share. Meanwhile, the company may also acquire a firm operating in different space. It diversifies the market offerings of the firm, preventing it from sector-specific demand shocks.

What are the Types of Acquisition?

Depending on the nature of business of the acquiring and target firm, acquisition can be classified into the following categories:

In Horizontal acquisition, one company (generally a larger one) acquires another company in the same business providing similar offerings. Simply put, it involves the acquisition of a competitor. The focus of such type of acquisitions is to increase the market share and reduce the competition in the market.

Vertical integration is defined when two companies involved in the acquisition work towards the production or delivery of the same product but at different stages. This type of acquisition is carried out along the supply chain. The acquiring company eventually integrates additional production or logistics operations under its umbrella.

The acquisition in which the process brought in through the acquisition is one step ahead of the company's original operational process is called forward integration. Thus, a manufacturing company acquiring a distributor or retailer is an example of forward acquisition.

Conglomerate refers to companies that through previous mergers and acquisitions own many small companies which operate in different areas. They are usually multi-national organizations functioning in different industries.

The conglomerate acquisition occurs when the company acquires an entirely unrelated business. This type of acquisition aims to diversify risk and increase the market share of the company.

What are the Challenges Associated with Acquisition?

While acquisition offers multiple advantages and synergies to the parties involved, some inherent challenges cannot be avoided:

Why is Geo (NZX:GEO) in news these days?