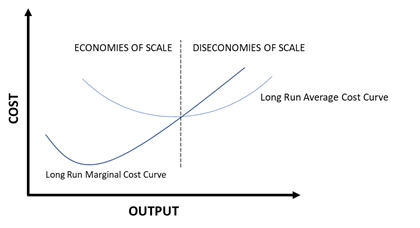 In the diagram above, the lowest point of the Long-run Average Cost Curve (AVC) is attained when the Long Run Marginal Cost curve intersects the long run AVC from below. Towards the left of this point are the economies of scale while towards the right are the diseconomies of scale.

Economies of scale are achieved when firms expand to the extent that their average costs start to decrease. Thus, production becomes cheaper, and profits are increased.

While in the initial stages of production, firms bear high costs, these costs are only limited to lower levels of production. For instance, consider the example of an entrepreneurial start-up. The initial cost incurred by the firm will be higher. As the firm expands, the cost of production is dispersed over an increased number of goods. Thus, effectively it appears as though the average cost is reducing. This is referred to as ‘achieving economies of scale’.

These economies of scale are achieved because of factors such as specialisation of labour, incoming of bulk orders, reducing operational costs by spreading them over greater units produced.

However, when firms expand further, they achieve diseconomies of scale as costs start increasing with greater production also leading to discrepancy in the balance sheet of the companies.

As companies grow too much in size, the advantages offered by more production are overshadowed by various other factors that lead to a rise in the average costs.

Why do the diseconomies of scale occur?

For big companies, it becomes important to maintain a proper structure of the flow of information and tasks. Proper communication channels are necessary to ensure that information is correct and transparent.

As the chain of command expands, and more people are promoted to higher positions, there can also be a conflict of opinion between decision makers. It is important to maintain transparency and to discuss possible options at hand before passing down information.

This lack of touch could lead to a feeling of alienation which might cause a lack of enthusiasm among the workers. Deprivation of contact with employers could lead to people shirking from work.

Also, it is seen that output per worker falls as many people are hired for the few, select roles available. For example, if a firm hires 5 workers, the output delivered per worker would be very high. Now if for the same number of tasks, more workers are hired, the workload is shared between the workers. Thus, output per worker falls. When the number of workers increases up to an extent where there are too many of them for only a few available roles, then it could counteract their productivity.

This lack of contact could also lead to the principal-agent problem. If more prominent roles are assigned to employees with lesser experience, it isn't easy to keep track of whether they can cope up with the responsibilities.

When workers are promoted and assigned tasks, they might neglect and not do their duties efficiently, since there is nobody to monitor them. This could lead to a lack of efficiency in the production process.

How can diseconomies of scale be avoided?

Diseconomies of scale can lead to decreased competitiveness of the firm. To maintain its attractiveness, it is important for firms to maintain a well structured and organised workflow. It is imperative that firms maintain regular contact with the employees to keep them motivated.

Team meetings, morale boosting events, incentive-based tasks are possible solutions to tackle the problem of decreased motivation among the employees.  While both upper and lower level management are occupied with their work, the redundancy of their work may sometimes lead them to underperform. It is important to hold events that can provide a more holistic working environment.

Finally, work delegation is the most basic way to achieve structural coordination. As roles become more defined, it becomes slightly easier to fulfil them and keep things streamlined. Also, providing a platform to junior employees could give rise to newer ideas and out of the box solutions to complex situations that companies face.

Enhance your knowledge, Go through : Why Move the Earth When A Nudge Can Do! Simple Solutions to Complicated Problems

How do the Returns to Scale affect Diseconomies of Scale?