What is a Special Purpose Acquisition Company (SPAC)?

A Special Purpose Acquisition Company, or SPAC is a company that has been solely set up for the purpose of capital accumulation through an IPO. SPACs have been increasingly becoming popular amongst many experienced management teams and sponsors.

The capital raised through the IPO is cumulated for the purpose of acquiring an existing company. Thus, a SPAC IPO is followed by mergers or acquisition with an operating company making the latter a publicly listed company.

A SPAC has initial sponsors who can be venture capitalists, hedge funds and other corporate entities. Companies falling under the SPAC categories can be thought of as shell companies as they do not have underlying operations, the sole intent of their existence being finding a suitable private company to merge with.

How does a SPAC work?

The process of IPO may take several years for most private companies. However, SPACs act as a short-cut for a private company wanting to go public. An already public company listed as a SPAC can easily make a private company go public in a much lesser timespan than taken by the traditional IPO process.

The process of a SPAC is simple. The SPAC must go public through an IPO and raise capital sufficient to acquire an existing company. These funds are raised with the help of sponsors. After months of adequate research work, SPAC acquires a company that is currently in operation and is private. The private company acquired by the SPAC becomes public through the process of a reverse takeover. This allows investors and traders to invest in the company formed because of the merging of the two companies.

Due to the risky nature of shell companies, many new guidelines have been introduced to ensure that they function under regulated environment. These companies were previously known as blank cheque companies and were often surrounded by several frauds. However, many new regulations have ensured that the newer version of these companies are more secure and less prone to scams.

What are the timelines of a SPAC operation?

Despite the time advantage offered by a SPAC, the process must go through a specified process. The phases within the timespan of this process include:

Once the business operation is approved by the shareholders and other conditions are met, the business goes through a De-SPAC transaction. This leads to the SPAC becoming a publicly traded operating company.

What are the advantages of a SPAC?

The faster IPO process offered by SPAC to private companies continues to be their main selling point. Most companies do not get to go through the IPO process till the time they have remained in business for many years and have a proven business model. With the help of a SPAC, the IPO process becomes very much achievable and easier for such private firms. A process which otherwise takes years can be completed only within a year or two with significantly lesser amount of money involved in it than what is normally required.

Additionally, SPAC shares are priced at a lower rate than most companies. This makes SPAC shares more accessible to most investors. Also, the high number of shares sold allows small investors to also be a part of the process. A SPAC would typically invest in trending areas and those companies which have a promising future ahead.

What are the disadvantages of a SPAC?

It may happen that the SPAC investors are not aware about where the funds might end up. The target company, which is to be acquired by the SPAC, may not even be known at the time the sponsors are putting in the capital. This makes the deal nearly impossible to evaluate and can lead to a huge time gap between the time when the investment is done and when a company is acquired.

There is also a chance that the funds paid by sponsors are returned to them in case the SPAC is unable to find an appropriate firm to acquire. However, this can be a huge demotivating factor for investors as their funds are locked up for some time without any future outcome.

Despite their growing popularity, these companies have had mixed performance in the share market. Observed over the years, many SPAC merged firms have not been able to bring in huge returns to the shareholders. 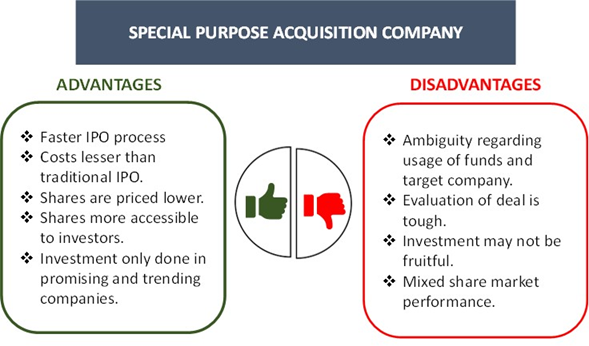 SEK to WHS: Take a look at these 5 dividend-paying consumer stocks

ASX 200 to fall ahead of US inflation data; CBA results ahead