What are Hedge Funds?

A hedge fund is a managed pooled fund for alternative investment method which employs trading into complex products including equities, derivatives, real estate, currencies and many others. The performance of the fund is measured in absolute return units.

As the name suggests, hedge fund tries to “hedge” the risk associated with a particular investment choice based on the price relevant information. Hedge fund managers choose from the variety of options from stocks to bonds and commodities to currencies. Sometimes they may invest their own money to a fund to leverage the magnifying effect of the investment.

How did it start?

Alfred Winslow Jones is regarded as a pioneer in the field of hedge fund management, and he launched the first hedge fund in 1949. Alfred structured the funds by finding the loopholes in the regulations and reaping benefits from them. Alfred formed an investment partnership and committed his own money in the partnership. He fixed his remuneration in the form of performance incentive, which was 20% of profits.

Alfred, in his endeavour, combined shorting and leverage, and hedged them against the market movements and reduced the risk exposure. He chose equal short and long positions for his portfolio. The overall impact of the combination of long and short positions, his portfolio became more stable with lower risks. 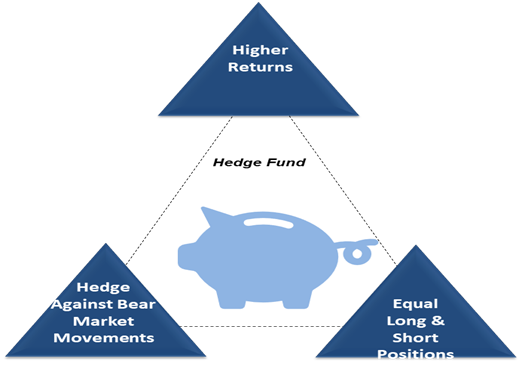 Many fund managers joined Alfred to gain fame and fortune. Some of them even went to start their own fund houses and an SEC report of 1968 reported 140 hedge funds in the United States of America.

During the stock market boom of the late 1960s led to a belief that Hedge Funds underperformed than the overall market. Many hedge fund managers dropped the idea of long term and short term positions and did not feel the need for risk hedging.

During the mid-80s, hedge funds again became centre of attraction for large investors due to the Julian Robertson’s Tiger Fund. The fund was one of the many global macro funds that used leveraged investments in securities and currencies after careful assessments of global macroeconomic and political situations.

Tiger Fund, in 1985, correctly forecasted the end of the four-year trend of the US dollar appreciation against currencies of Europe and Japan and speculated in non-US currency call options. A report in the year 1986, reveals that since its inception, Tiger Fund gave an average of 43% return to its investors.

During the late 1990s, hedge fund suffered one of the largest losses. Quantum Fund lost US$2 billion in 1998 during the Russian debt crisis. Tiger Fund lost more than US$2 billion in trading of Japanese Yen with respect to the US dollar. The losses and redemption of money by the investors led to the closure of the Tiger Fund in 2000.

What are the different types of hedge funds?

Hedge funds can differ based on the strategy chosen by the manager after consulting the investors. The strategy is laid out to the investors through a prospectus before going forward with it. This makes a hedge fund more flexible as investors are always aware of about where the funds are going.

Thus, hedge funds can be of the following types:

How is a hedge fund different from a mutual fund?

In operation, hedge funds and mutual funds may sound the same as they both involve a pooled sum of funds being invested. However, there are some fundamental differences between both. These include:

How is it doing now?

The hedge fund industry has evolved substantially, and their numbers are in thousands and managing trillion dollars of investment around the globe. Their Modulus Operandi has also evolved over the year. They ask their investors to put the money in locking period of a minimum of 1 year.

Hedge funds are usually open to qualified investors. The fees charged by the fund managers are also generally on the higher side, around 2% of the underline asset value plus the performance fee on gains generated.

Fund managers use leverage to increase the spread of profit, but at the same time, leveraging can incur more loss than the actual investment would have made. Speculative investment has the potential of higher risk and huge losses.

Being said that, the past financial blunders of hedge fund have also provided expensive learning and experience to the fund managers. Building upon the legacy, hedge funds have given higher returns over the years.

The average rate of returns of hedge funds attracts most of the wealthy investors towards them. They invest in anything from bonds to securities to currencies and even real estate. There is no fixed rule of investment or instrument for investment, and no definition could cover the entire system of hedge funds.

What are the two sides of investing in Hedge Funds? 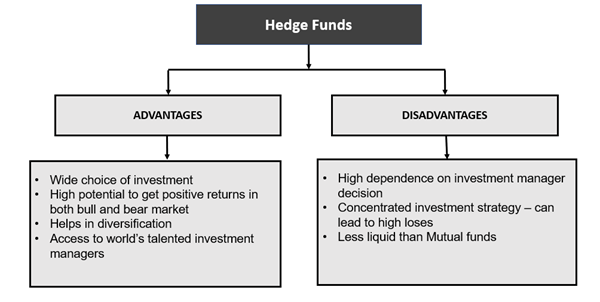 What are accounts payable? Accounts payable is the amount of cash a company is liable to pay to its suppliers and clear dues. As current liabilities of the company, accounts payable is required to be settled over the next twelve months.  It also shows the obligations of the business over the next year. Accounts payable is required to be repaid in a short period, depending on the relationship with suppliers. It is essentially a kind of short term debt, which is necessary to honour to prevent default.  As a part of the company’s working capital, it is widely used in analysing the cash flow of the business and cash flow trends over a period. Accounts payable may also depict the bargaining power of the company with its vendor and suppliers.  A vendor or supplier may give the customer longer credit period to settle the cash compared to other customers. The customer here is the company, which will incur accounts payable after buying goods on credit from the vendor.  There could be many reasons why the vendor is providing a more extended credit period to the firm such as long term relationship, bargaining power of the firm, strategic needs of the vendor, the scale of goods or services.  By maintaining a more extended repayment period to supplier and shorter cash realisation period from the customer, the company would be able to improve the working capital cycle and need funds to support the business-as-usual.  However, prudent working capital management calls for not overtly stretching the payable days as it might lead to dissatisfaction of supplier. Also, investors tend to closely watch the payable days cycle to determine the financial health of the business. When the financial conditions of a firm deteriorate, the management tend to delay the payment to their suppliers. What is accounts payable turnover ratio? Accounts payable turnover ratio shows the capability of a firm to pay cash to its customer after credit purchases. It is counted as an essential ratio to analyse the cash management attribute of the firm and its relationship with vendors or suppliers.  It is calculated by dividing purchases by average accounts payable.  Purchases by the company are calculated as the sum of the cost of sales and net inventory in a given period:  Now let’s understand this the help of an example. Let us suppose, Cost of sales of Company XYZ for the period was $60,000, and XYZ began with inventories worth $21000 and ended at $15000. Accounts payable at the beginning was $20000, and $15000 at the end.  Now the purchases will be $66000 (60000+21000-15000). The average accounts payable will be $17500. Therefore, the accounts payable turnover ratio will be 3.77x.  Dividing the number of weeks in a year by the accounts payable turnover ratio will give the number of weeks the company takes on average to settle its payables. In this case, it will be around 13.8 weeks (52/3.77).

Considered as the best hedge fund manager of his generation, David Tepper is an American businessman with net worth of USD 12 billion. He is a President and Founder of an US-based fund management company, Appaloosa Management.

Earmarking is a term used in the banking industry to refer to funds, which has been set aside to pay for some specific projects. The term is usually associated with transactions as well as earmarked transactions, which could be defined as the business transaction, made to claim any pre-allocated fund to meet the expenditure.