What is an Absolute Advantage?

Absolute advantage is one of the key macroeconomic terms, which is based on the principles of Capitalism and is often utilised in international trade-related decisions.

Absolute advantage refers to the competence of a company, region or country to produce goods or services in an efficient manner compared to any other economic entity. The efficiency in production can be achieved by:

What is the Significance of Absolute Advantage?

Different countries or businesses possess a different set of ability owing to their location, soil composition, weather, infrastructure, or human resource skills. When applied in the right direction, various factors may pan out to offer more cost-effectiveness and hence build absolute advantage of the entity in comparison to others.

The absolute advantage remains one of the critical determinants for the choice of the goods or services to be produced. Absolute advantage in a particular area often translates into profitability in the area. The profit margin increases by the achievement of cost efficiency, allowing the entity to ensure higher profitability over the competitors. 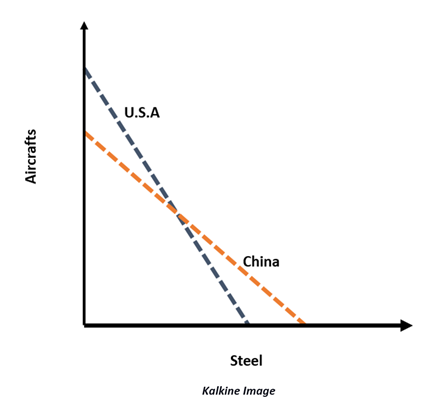 While natural conditions, which include climatic factors, geometry, topography, cannot be altered for achieving absolute advantage, the countries use the underlying factors strategically in their favour. Furthermore, factors of production are focused at by many companies or nations for building absolute advantages.

Some of the strategies for building absolute advantage includes:

What Do We Understand by Comparative Advantage Vs Absolute Advantage?

Evaluating the comparative advantage introduces the concept of opportunity cost, which is the deciding factor to determine the production of particular goods or services. Opportunity cost refers to the potential benefits associated with the next best possible alternative which is missed out when one option is chosen over another.

The Absolute advantage simply considers the capability of a business or region to deliver goods or services in the most efficient manner. The Comparative Advantage, however, also takes into account the benefits that are forgone if an entity decides for production of a particular product or services.

Understanding through an Example

It highlights that country A is forsaking the production of 0.7 laptops if it is deciding to manufacture one television. On the other hand, it is missing out the opportunity to manufacture 1.42 televisions for every single laptop manufactured.

Now, say Country B’s opportunity cost for producing a television is 0.5 laptop, and that of producing laptop is 2 televisions.

It has to be noted that despite country A having absolute advantages in both the products, it would be mutually beneficial for both the countries if country B produces television while country A produces laptops.

Do You Know About Absolute Advantage Theory by Adam Smith?

The concept of Absolute Advantage was indicated by Adam Smith in his book called ‘Wealth of Nations’ which focusses on International trade theory. Adam Smith, in his book attacked on the previous mercantilism theory, which mainly stressed for economies to maintain trade surplus in order to command power.

The Absolute Advantage theory considered that the countries possess different ability with respect to the production of varying goods or services. It argued that it is not necessary that a state may hold an absolute advantage in the production of all goods, and here the relevance of trade comes into play.

It advocates that countries should produce those goods over which they hold a competitive advantage. It would allow the countries to make the same amount of goods using few resources or in less time. The theory propagates the relevance of trade for economic sustainability.

What Are the Limitations of the Absolute Advantage Theory?

Shopify stock (TSX:SHOP) shed 9% in a day! Can it be a bargain deal?

Is Inplay Oil (IPO) the next big energy stock for Canadian investors?

Is UK’s CBDC as good as shelved?

NFTs vs Bitcoin? Which one will 2022 treat better?

What is Lossless crypto? Is LSS token a good buy?

Spark (NZX:SPK): How did it fare last month?

Can cold protect you from Covid-19? A study says so