Capital refers to the financial assets held by a firm and/or funds outsourced from other forms of financing. Capital can have multiple meanings; however, this is the definition used in finance. In a more general sense, capital is understood as anything that generates more value.

Capital can be defined differently based on the usage of the term. 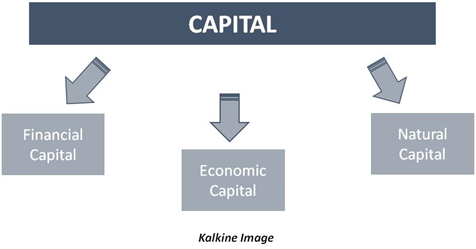 Is money a form of capital?

Money cannot be strictly defined as capital because money itself is an instrument to purchase goods and services which end up becoming the capital. For instance, the investments made in financial instruments by firms are a form of financial capital.

Thus, any money held by a firm may not precisely be termed as capital; however, once it is invested in financing activities, it becomes a form of capital.

What are the components of financial capital? 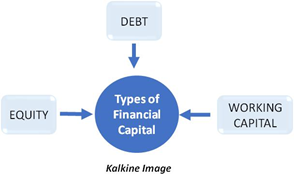 Debt is an easy method of financing business activities; however, the interest associated with it might make it expensive for some. If the business fails, the borrower must repay the debt. The advantage of taking a loan is that the profits need not be shared.

Businesses may initially fund their processes themselves; thus, they own 100% equity and would earn all the profits. However, angel investors or venture capitalists may sometimes invest too.

In those cases, a proportion of the profits goes to these investors. This may be disadvantageous in some cases, where investors end up taking a large stake in the company in exchange for initial capital provided by them. Businesses that are at an early stage might benefit from the initial investment; however, their profits in future are decreased by a large percentage.

To summarise, working capital is derived as:

How is financial capital different from economic capital?

Financial and economic capital are both utilised in a business. However, financial capital is a much broader term.

What is the cost of capital?

There is a cost associated with acquiring capital. Since capital includes loans and borrowings to finance the business, the cost of capital depends upon the coupon, interest rates, and yield to maturity of the debt.

The Capital Asset Pricing Model or CAPM is used to calculate the cost of equity. CAPM uses the volatility of the returns as a measure of calculating how much the investment should cost in a year. On the other hand, cost of debt is equal to the interest paid on loans. Cost of equity would always be higher than the cost of debt. This is so because the cost of equity is riskier and more vulnerable to fluctuations.

Why is capital important for businesses?

Capital allows businesses to expand and grow in wealth. It boosts productivity in the economy and provides valuable goods and services necessary to sustain. Businesses realise the importance of maintaining capital and they use various methods to analyse on how to maintain it.

Why Cygnus Gold (ASX:CY5) is in news?