What is the concept of free trade?

No imposition of taxes, tariffs, or duties nor any quotas on export or restriction on import by the Government comes under free trade policies.

In a nutshell, free trade is a protective trade strategy that is the opposite of protectionism, aiming to suppress international competition.

Why is the term "free trade" debatable?

Free trade refers to the notion of nations openly trading commodities with few restrictions. Though the term "100% free trade" does not exist in its full sense, every nation has a complicated set of taxes on international products known as tariffs, limitations on how many products may be brought in (known as quotas), and outright prohibitions on importing some items.

People have done justice to the concept of free trade by praising and despising it in equal measure. Free trade, according to some, makes everybody wealthier and encourages growth in poorer countries. For others, it increases inequality and gives companies too much control.

People who are the supporter of free trade often begin with the concept of comparative advantage. In brief, each country is unique, and some countries thrive at manufacturing some goods more than others. Rather than every country attempting to produce everything in-house, it makes more sense for them to specialise in and manufacture the items they can shine at. By providing the best input, countries can swap what they are known for viz a viz the goods that are unavailable locally.

Critics, on the other hand, claim that even if free trade produces more money overall, most of it heads to the wealthiest and powerful people at the detriment of everyone else. People in richer nations are concerned that free trade will make it easier for their jobs to be relocated abroad. In contrast, people in poorer countries are concerned that free trade will give multinational companies too much power over their politics and economics.

Free trade is debatable because it is difficult for countries to progress from poverty to wealth. If every country specialises in what they are "best" at producing, people in poorer countries can get stuck specialising in lower-wage industries like fishing, mining, or farming. Instead, they argue that certain protectionist policies are needed to develop more advanced industries. 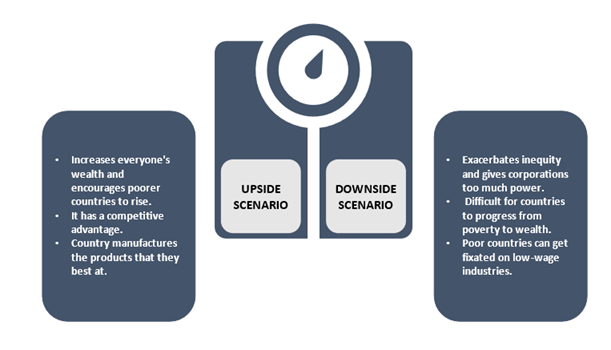 How does a free trade agreement function?

A free trade agreement (FTA) is a deal between two or more nations in which the countries negotiate on specific points to promote trade, such as investor security, commitments that impact goods and services trade, and intellectual property rights.

In contemporary foreign trade, free trade policy refers to the nations' formal and reciprocal agreement. To encourage free trade, a government does not need to take concrete actions, and this "hands-off" approach is referred to as trade liberalisation.

Businesses produce and export products that best utilise their resources under free trade agreements, while others import goods that are scarce or unavailable domestically in each region. By combining local production and international trade, economies can expand faster and meet the needs of their customers.

A trade agreement is formed when one nation imposes trade barriers and no other country reacts. A nation may also relax trade barriers unilaterally, although this is uncommon because it would place the country at a competitive disadvantage.

Bilateral agreements arise when two countries agree to relax trade barriers to increase business opportunities by reducing tariffs and granting each other preferential trade status. Bilateral trade deals are most common in the food sectors, automobile, and oil for most countries.

These deals include three or more countries and are the most challenging to negotiate. They are more complicated than bilateral agreements by their very nature, as each country has its own set of needs and demands.

Multilateral agreements are extremely powerful once signed because they encompass a wider geographic region, giving signatories a greater competitive advantage. All countries also confer the most-favoured-nation status to one another, awarding the best bilateral trade terms and the lowest tariffs.

The World Trade Organization (WTO) steps in to help facilitate and implement global trade agreements after agreements have progressed beyond the regional stage.

What are the benefits of signing a free trade agreement?

When trade barriers are removed, international firms tend to pour money into local companies, assisting them in expanding and competing, resulting in further prosperity.

Domestic companies gain access to the latest technology established by their multinational partners in term of human expertise.

What are the drawbacks of free trade?

Tariffs aim to keep retail prices competitive, preventing work outsourcing. Items imported from countries with lower wages cost less when tariffs are removed. Although this may seem beneficial to consumers, it is very hard for small businesses to grow, causing them to cut their workforce.

Many foreign governments operating in developing countries often fail to recognise the importance of intellectual property rights. Companies' inventions and emerging developments are often stolen, causing them to compete with lower-cost, locally manufactured fake goods that are not protected by patent laws.

The companies concerned experience sales reductions as a result of the high degree of rivalry sparked by unregulated free trade. Smaller companies in smaller countries are particularly vulnerable to this impact.

What is a good free trade example?

The Regional Comprehensive Economic Partnership (RCEP), the world's largest free trade agreement, was signed by 15 nations, including Australia, Japan, China, Korea, New Zealand, and 10 members of the Association of Southeast Asian Nations (ASEAN), after a decade of negotiations.