Let us now go through the recent updates of the 5 players - NAB, AVN, OMH, BHP & SCG

Faced the Challenging Environment in FY 19:

National Australia Bank Limited (ASX: NAB) is one of the biggest four banks in Australia. It also operates in countries like New Zealand, Europe, Asia and the United States.

NAB has recently on 20 November 2019, notified the market that it has agreed to pay an amount of $49.5 million for the settlement of the class action, which was put by the law firm - Slater & Gordon regarding CCI or Consumer Credit Insurance. However, this settlement can take place after getting the approval of the Federal Court of Australia.

On the other hand, for FY 19 period, the company delivered 10.6% fall in the cash earnings to $5,097 million on the back of additional charges of $1,100 million after tax for customer-related remediation and also due to change in the software capitalization policy. Excluding the customer-related remediation, the company posted 1.1% increase in the revenue & 1.7% rise in underlying profit. 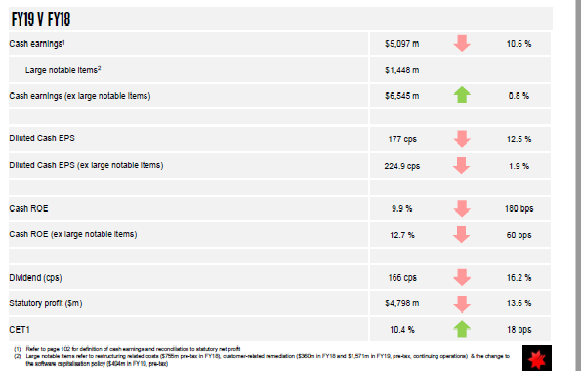 Meanwhile, NAB will be paying a 100 percent franked dividend of 83 cents on 12 December 2019 and its ex-dividend date was 14 November. Thus, the company declared the total dividend of 166 cps, which reflects a 16% reduction compared to FY18.

During FY 19 AVN has posted $85 million increase in its valuation:

Aventus Group (ASX: AVN) is a leading player in real estate group, that is into the development and management of retail centers in Australia.

AVN has recently settled the APS1 or Aventus Property Syndicate 1, which bought McGraths Hill Home from AVN at its book value of $42.5 million. Moreover, the company for FY 20 expects FFO earnings to grow in the range of 3% - 4% growth, which reflects the range to be 19.0 – 19.2 cps.

Further, in FY 19 the company has reported 8.2% increase in the Funds from Operations to $96m on the back of strong underlying rental growth. During FY 19, there has been $85 million increase in its valuation.

AVN paid the unfranked dividend of AUD 0.0422 cents on 31 October 2019 and was ex-dividend on 27 September 2019. AVN has dividend yield of 5.92 percent on an annual basis & the declared dividend was not franked.

OM Holdings Limited (ASX: OMH) is an integrated player for manganese that invests, explores, develops the related projects, along with the operation and trading of them. The company has operations in South Africa and in Sarawak, East Malaysia apart from Australia.

In October, the company notified that it intended to go for a secondary listing of its common shares on Bursa Malaysia Securities Berhad after getting the required approvals from the relevant authorities in Australia and Malaysia, in order to increase its liquidity, there. The company has already made the investment in OM (Sarawak) Sdn Bhd’s ferroalloy smelter located in Samalaju, East Malaysia for a 75% interest.

BHP Group Limited (ASX: BHP) formerly known as BHP Billiton Ltd, is into the exploration & production of various commodities that includes iron ore, metallurgical coal, copper and uranium. Along with this, the company is into petroleum exploration, production, and refining.

In FY 19 period, the company has reported EBITDA of US$23 billion at an EBITDA margin of 53 & has generated the free cash flow of US$10 billion. Moreover, BHP had paid 100 percent franked dividend of US$0.78 on 25 September 2019 and had an ex-dividend date of 5 September 2019. The company has returned a record US$17 billion to its shareholders.

Scentre Group (ASX: SCG) a retail estate stock, develops shopping centre with retail destinations that operates under the Westfield brand in Australia and New Zealand. The company also has presence in the United States and the United Kingdom.

SCG had posted more than 535 million increase in the growth of Customer Visits in the third quarter report, released on 31 October 2019 wherein, it mentioned that 99.3% of its portfolio was leased. During the quarter, the company completed 1,859 lease deals and in the lease deals area of 312,566. The company has reported 2.4% increase in the total in-store sales for the third quarter & 2.9% rise in the specialty in-store sales.