Buybacks or share repurchases are a part of capital management programs undertaken by the companies, usually to deliver shareholder value. However, there could be other reasons as well. Some other reasons include reducing supply, preventing other shareholders from gaining a controlling stake, undervalued stock prices, among others.

Share buybacks are similar to dividends in many ways, as the company distributes cash to holders of its shares through the acquisition of their holdings against a price/consideration. Further, buybacks often provide some tax benefits, depending upon the jurisdiction.

Although, there have been critics of share buybacks as well. Most prominently, Warren Buffet said that buybacks conducted at a price above the intrinsic value could adversely impact the expected value.

Corporate America has been setting records in buybacks. In 2018, the US companies surpassed the mark of $1 trillion in buybacks in the US history. Also, Apple had conducted buyback worth $100 billion during the year.

However, the frequency and cash spent on buybacks are coming down. According to media reports, the S&P 500 companies bought back shares worth USD 161 billion in the second quarter of 2019, which was 18% less than the first quarter. It was also said that the share repurchases had been prominent contributors to bull run.

Some of the prominent examples of buyback failures include:

On-market buybacks – In these buybacks, the company conducts buyback of shares during normal trading hours via market participants. The companies might act at their own discretion to conduct share buyback at a given price.

Off-market buybacks – In these buybacks, the company provides detailed information related to buybacks, and the information might include eligibility, number of shares, important dates to apply etc.

Let’s look at some possible reasons:

Shareholder Value: Buybacks allow the companies to deliver shareholder value in two ways. First, it allows the shareholders to receive cash against the shares of the company held by them. Second, if the shares bought during the buybacks are cancelled, it reduces the total shares outstanding, and ultimately lowers the dilution. As a result, it increases the stake of each shareholder in the company.

Value Gaps: At times, the stocks are heavily beaten in the markets due to adverse developments in any company’s business, among others. Severe fall in the price of the stock of any company could lead to a gap in its value and price.

Therefore, the companies often act opportunistically at such times, and conduct buybacks to gain from the severe value gaps in the price. The company’s capacity to buyback shares depends upon the jurisdiction.

Qantas is conducting an off-market buyback for up to 79.7 million shares through a tender offer that was announced during its full-year results in August 2019. The buyback would include a capital component and a deemed dividend component for Australian tax purposes.

Further, the tax consequences of the buyback would be idiosyncratic to every shareholder. The shareholders that are ineligible for the offer are excluded foreign persons, holders of ADRs and restricted employee shares. 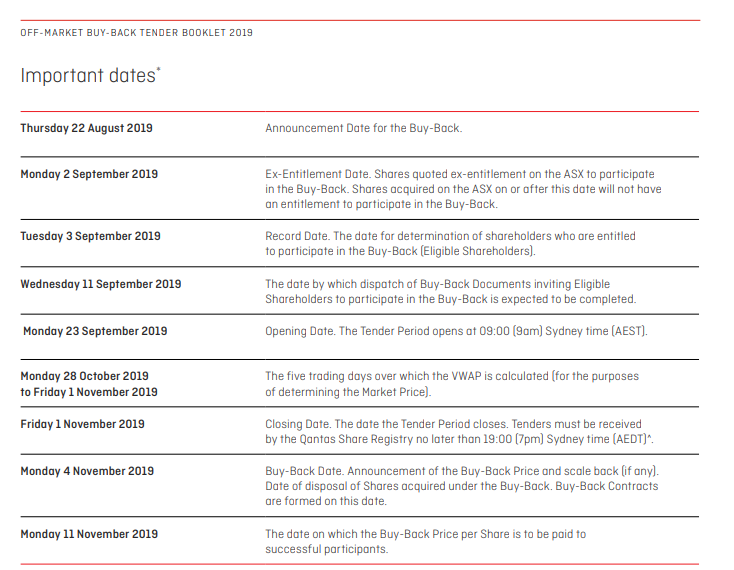 It is reported that the company would continue the buyback program until 2 September 2020 or earlier if completed before. Goldman Sachs has been working on behalf of the company to buy back shares from the market.

According to the latest release on 28 October 2019, the company is left with approximately $170.2 million of cash consideration to be paid against the bought back shares.

On 27 June 2019, the group has notified to conduct an on-market buyback for $800 million. The announcement was made in conjunction with the notification of its sale of the two Sydney CBD office towers to Blackstone for $1.52 billion.

It was said that the buyback would allow the company to enhance return on equity and maintain its strong balance sheet position.