Small-cap stocks generally have higher growth potential than Blue Chip Stocks, which is why they are popular among investors. In a country like Australia, where interest rates are at record low levels, a small-cap stock which is providing good dividends, is considered as an attractive investment option. We have selected six small cap stock with good dividend yield. Let take a look at these small-cap stocks and their recent updates.

The national developer of high-quality residential communities and commercial developments, Cedar Woods Property (ASX: CWP) is currently trading with an annual dividend yield of 4.45% (as per ASX). The company has a market of around $569.57 million and outstanding shares of 80.45 million.

For the year ended 30 June 2019 (FY19), CWP reported record profit and dividend that were driven by a strong performance across the business. Over the year, the companyâs revenue increased by 56% to $375.9 million, reflecting an improvement in sales and, an increasing contribution from built form projects which include office developments. The company declared total dividends of 31.5 cents per share for FY19, up 5.0 per cent on last year, generating a fully franked yield of 5.5 per cent. 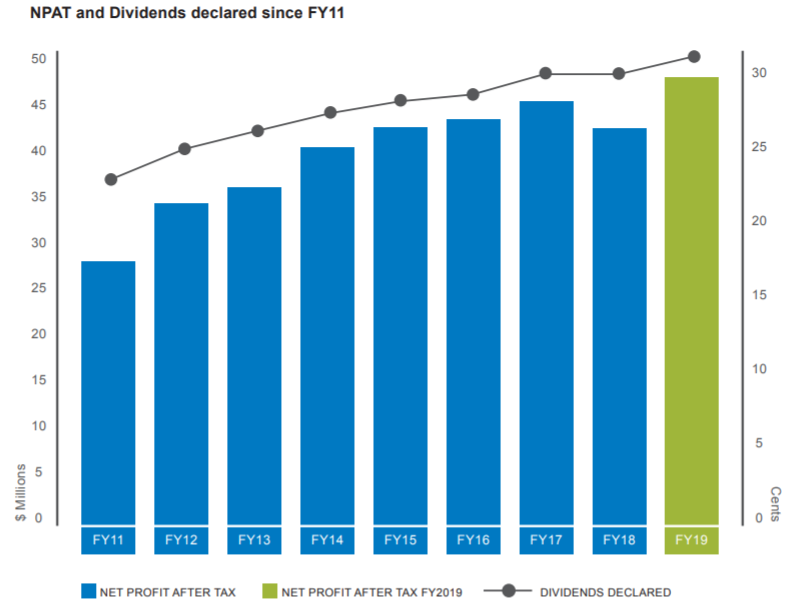 Australiaâs leading listed REIT, Viva Energy REIT, with its high-quality portfolio of service stations, has been seeking to maximize the long-term income and capital returns from its ownership of the portfolio for the benefit of all security holders. VVR has a market cap of around $2.08 billion and its stock is trading with an annual dividend yield 4.94%.

The company recently announced the appointment of highlight experienced Ms Kerri Leech as Chief Financial Officer (CFO) of VER Manager Pty Ltd. Ms Leech will commence with Viva Energy REIT in the Q1 2020, while Mr. Farrands to remain with Viva Energy REIT until the end of March 2020 to administer various strategic initiatives and to assist with an orderly transition of responsibilities.

Australiaâs leading fully integrated owner, manager and developer of large format retail centres, Aventus Group is trading at a market cap of around $1.52 billion on Australian Securities Exchange (ASX) with an annual dividend yield of 6.09%.

For the year ended 30 June 2019, the group reported Funds from operations (FFO) of $96 million with distribution of 16.6 cents per share.

The group recently announced the settlement of the Aventus Property Syndicate 1, representing the launch of its first dedicated large format retail syndicate since listing. This transaction is expected to reduce gearing on a pro-forma basis by approximately 3% to 35.7%. In light of the launch of APS1 and recent capital management initiatives, Aventus expects its FY20 FFO earnings to be in the range of 19.0 â 19.2 cps.

The groupâs earnings and distributions to unitholders both increased during FY19 and both exceeded its initial market guidance:

Highlights of FY19 include the divestment of five assets coupled with the launch of SURF 3, and the acquisition of 12 convenience-based assets for $677.9 million. The company gearing remained in its preferred range, which is the lower end of the 30% to 40% loan-tovalue ratio band at 32.8%.

In FY19, the company earned a revenue of $161.1 million, up 12% on FY18, derived from a second transaction with Balbec Capital LP, PDL growth and a positive revenue recognition change under AASB 9. The company reported EBIT of $51.3 million in FY19, up by 18% on last year, driven by performance and the lower amortisation charge incurred under AASB 9. The total dividend for the year increased by 5% to 8.2 cents per share, fully franked. After a solid performance in FY19, which included significant PDL investment, the company expect further strong performance in FY20.

Funds management group Pengana Capital Group Limited (ASX: PCG) has recently provided an update in relation to itâs on the market buy back, wherein, it announced that till now 876976 shares have been bought back under the offer for a total consideration of around $15,64,596.78.

Recently on 7 November 2019, the company announced its intention to acquire a significant stake in Lizard Investors LLC, a Chicago-based asset management firm, providing an opportunity for the company to take an ownership stake in a synergistic premium funds management business.