Australian REITS enjoyed 2018 as there were strong returns due to various factors such as lower interest rates, robust economic growth and others. On the other hand, 2019 came in with lot of challenges biggest of all being the China and USA trade tensions. Though the Australian economy has been responding positively to such situations still the housing prices and rental prices were falling. Housing market rebounded in June 2019, due to change in sentiment, which was driven mainly by lower interest rates, easier credit access, and certainty about taxation. The increase is prices is expected to continue in coming months but shall not be expected as a "V-shaped recovery".

Scentre Group operates and own the pre-eminent living centres in New Zealand and Australia. The company has a real estate under management of $54.2 billion and $39.1 billion as ownership interests in shopping centre. SCG has strong franchise value with 41 Westfield living centres.

The company announced third quarter results for the period ending 30 September 2019, key highlights are as follows: 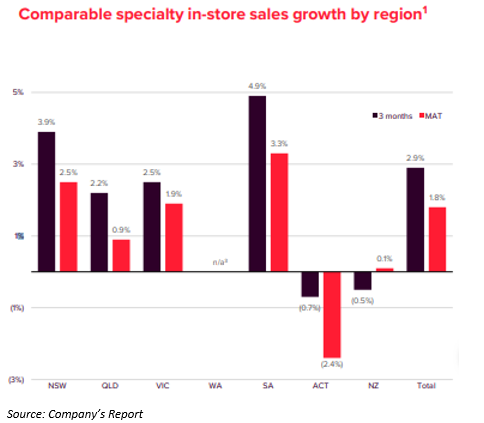 Reliance Worldwide Corporation Limited headquartered in Melbourne, Australia is a publicly listed company. The company designs, manufacture and supplies plumbing solutions and water control systems worldwide. RWC has 15 manufacturing plants and 5 R&D centres with presence in more than 44 locations. Recently on 10 October 2019, the company has announced to change the address of the principal place of business with immediate effect. The new address of the company now will be Level 26, 140 William Street, Melbourne, Victoria 3000.

Results of the Annual General meeting

On 31 October 2019, the Annual General Meeting of the company was held at Melbourne for giving updates on the financials of FY2019. The company had record sales of $1.1 billion, up 43%. Operating earnings up by 66%, with adjusted EBITDA at $263 million.

Net Profit after Tax for FY2020 will be between $150 million to $165 million. The most significant determinants of performance in financial year 2020 are expected to be the extent of Brexit disturbance in the UK.

Mirvac Group is a leading diversified Australia Property Group. The company owns and manages assets across office, retail and industrial sector with more than $18 billion of Asset Under Management (AUM).

On 22 October the company has announced the operational update of Q1 2020 for the period ending 30 September 2019. Key highlights of the update are as follows:

The company FY 2019 financial performance can be viewed here