Canada is one of the most advanced economies. From per capita GDP to Human Development Index, the economic indicators boast its economic prowess.

To sustain the high-income and heavily globalized economy, Canada should look favorably toward early adoption of central bank digital currency (CDBC). There are multiple compelling reasons. Let’s find out more about why Canada needs CBDC, which countries already have CBDCs, and what does the Bank of Canada’s official stance on CBDC is?

One example of the world warming up to CBDCs is China. Lately, the world’s second largest economy cracked down on cryptocurrencies like Bitcoin and Ether.

Also read: What is CBDC & how is it different from cryptocurrencies?

Last week, the curbs were intensified. Multiple regulators including the People’s Bank of China have unanimously called out ‘illegal’ activities in crypto assets. The central bank has vowed to punish any individual or entity that deals or facilitates dealing in cryptos. This is a major shift from 2013 when China deemed Bitcoin as a commodity and no restriction were imposed on its trade.

Simultaneously, China is looking at official large-scale roll out of its CBDC, the digital yuan. According to reports, the country will undertake testing during the Winter Olympics. Consequently, laws are likely to be modified to make the digital yuan a legal tender. The CBDC is in its testing phase in a few Chinese cities including Shenzhen.

There is no concrete news on when advanced economies of the West will bring their CBDCs. Neither the US nor its neighbor Canada has set any deadline for CBDC rollout.

El Salvador recently made Bitcoin a legal tender to save on remittance costs.

Now, Nigeria is also about to launch its own CBDC to achieve the same target – reducing the costs of cross-border transactions. The country is said to have teamed up with overseas companies for CBDC design. eNaira, Nigeria’s CBDC, will run on the open-source Hyperledger Fabric blockchain. 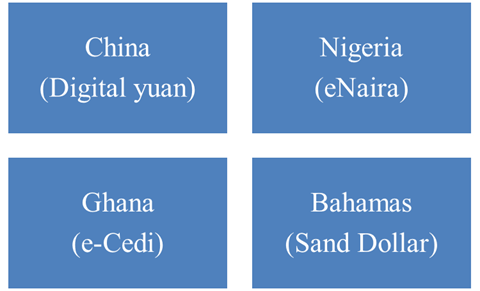 Another country in West Africa, Ghana is launching e-Cedi, the digital version of Ghanaian Cedi. Ghana is said to have collaborated with Giesecke+Devrient (G+D), a German financial services firm. Both the countries are looking to curb their citizens’ interest in volatile crypto assets. Their weak economies cannot manage with fleet of capital into risky assets that are traded on overseas exchanges.

Bahamas has already launched its CBDC – Sand Dollar. It is the digital counterpart of B$ and was issued by the central bank. The force behind the move was quicker settlement and added security in payments.

Bank of Canada and CBDC

It is not that the Canadian central bank is doing nothing in the CBDC space. The Bank had collaborated with the Monetary Authority of Singapore (MAS) in 2016 on ‘Project Jasper’. The aim was to explore the opportunity of using the distributed ledger tech for cross-border transactions. In a discussion paper titled ‘The Positive Case for a CBDC’, published on the Bank of Canada’s website in July 2021, the matter of debate was CBDC’s role in ‘solving market failures’.

The Bank has also sought CBDC design support from some prominent universities including the McGill University and the University of Toronto. The research papers came out in February 2021. These included proposals on economic, legal and technological aspects of Canada’s CBDC.

As of today, the Bank has yet to come out with any concrete design of Canada’s CBDC and its roll out. It is likely that high inflation and crucial matters like monetary policy and policy rates may not be allowing the central bank to devote much time to CBDC.

The growing list of countries rolling out their respective CBDCs must evoke attention of Canada. Bitcoin and other crypto assets may be volatile, but the blockchain and distributed ledger tech are promising. The country, together with likeminded economies like the US, must finalize the design of a robust and reliable CBDC. China’s crackdown on crypto assets and roll out of digital yuan is a wakeup call.