What is purchasing power?

Purchasing power refers to currency’s value represented by the number of goods and services one can purchase with a single unit of it. The purchasing power of a currency declines due to inflation and increases with deflation.

A currency’s purchasing power can shed light on the economic well-being of a nation. If a unit of one currency can purchase a greater number of goods than a unit of another currency, then the purchasing power of the former is greater than that of the latter.

Consider, for example, the value of one dollar in the year 1950. It is quite evident that the value of a dollar has declined with time due to inflation. Back in 1950, a better standard of living was affordable, with a lesser amount of money than what is needed today to afford the same lifestyle.

Why is purchasing power significant?

What do we mean by purchasing power parity?

Given the exchange rate of the currencies of two countries, the amount of money required to purchase the same basket of goods should be “at par” in both. Therefore, currencies must follow PPP to ensure that the income level and economic well-being of the respective countries is similar.

How is PPP categorised?

PPP can be categorised into two sub-types:

As inflation reduces the purchasing power of a currency, it needs to be adjusted when two currencies are compared.

How is PPP calculated?

The PPP equation can be represented as follows:

Therefore, if the spot exchange rate between Pound Sterling and the Australian dollar is 1.82 and one unit of a good costs £50 in the UK, then the same good should cost A$91 in Australia.

How is PPP useful?

PPP can be used to assess the relative economic strength of two nations. If other factors like inflation are accounted for, then through PPP, the fair price at which countries should be exporting can be calculated using the exchange rate.

Also, if two countries have a lot of disparity in their prices, then it should reflect in their exchange rate. PPP can also be used to compare metrics such as wages and GDP across nations, even when the countries do not have the same currency.

PPP gives a real touch to the nominal currency values. It uses real comparison rather than nominal comparison to give a better understanding of the countries. Through PPP, the focus shifts from the amount of money in an economy, to the value of a single unit of that money. 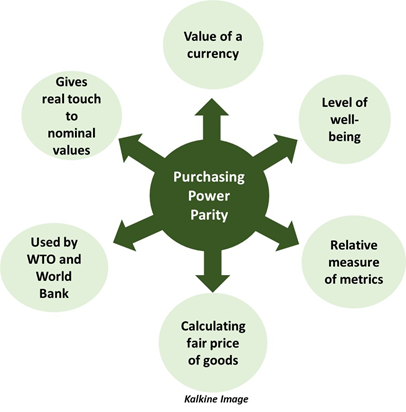 It is difficult to observe a scenario where PPP is accurately followed. The assumption that exchange rates account for all factors affecting the variation in prices of a good in two different countries does not always hold.

There are many external factors like tariffs, transportation costs and various levies that affect cross border price variations. The imposition of taxes and government policies that are unfavourable towards imports of foreign goods, majorly impact these price differences across countries.

Market inefficiencies like subsidies, monopolies or the formulation of cartels affect the prices of goods in a country. If a country has a higher number of government subsidies in one sector, then the domestic production of that sector would be more competitive than imports. Thus, the price would vary even more in the presence of subsidies.

Similarly, when companies form a cartel or have a monopoly over a good, they can charge as much for a good as they want. This also leads to a price variation across countries and is not accounted for in the exchange rate.

Even though PPP cannot always hold, it is still a useful tool in comparing economies. The World Bank and WTO both use PPP to compare different economic indicators like income levels and the overall level of well-being across countries.