What is a junior debt?

Junior debt, also known as subordinated debt, refers to bonds or other debt types with a lower repayment priority than other debt.

Junior debt is unsecured, which makes it riskier for investors. As a result, it has a higher interest rate than more senior debt from the same issuer.

Why is junior debt important?

Junior debt has a lower payment priority and is rarely backed by any collateral if the lender defaults. Compared to the equity market, the corporate debt market is less controlled, giving companies more flexibility when it comes to borrowing money.

Business deals with banks and underwriters who lead a loan syndicate with many investors to get a loan. A company may also issue bonds of varying repayment terms.

When it comes to recognising a company's multiple bond issuances, junior debt is crucial for fixed income investors. If a credit incident happens, such as a default, debt holders' interests govern repayment.

Companies may sell a wide range of securities to raise capital from investors, and an underwriter is usually responsible for structuring these items. Senior debtholders would receive preference for redemption, followed by junior debtholders, preferred shareholders, and eventually common stockholders.

In contrast to equity capital, which involves direct contact between investors and companies, institutional debt is usually issued in the primary market. Following primary market issuance, bonds and loans may be exchanged on secondary markets, with transactions facilitated by different trading groups. Senior debt tends to bear less risk in the secondary market than subordinated debt.

How does junior debt work?

To see how junior debt works, let us look at the example below.

Meanwhile, company XYZ realises that it needs more money and obtains a loan from bank ABC. The loan is classified as junior debt because of the terms and conditions agreed upon by the bank and the company. 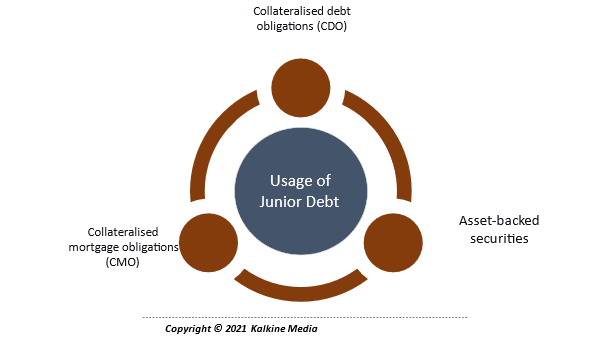 What is the function of junior debt?

While companies avoid junior debt because of the high interest rates, it is preferable compared to dilution of existing ownership by issuing new shares. Junior debt may also be used to finance acquisitions, recapitalisation, and growth capital, among other things.

Senior debt is a form of non-current debt that has the highest priority and is the first to be paid back in the event of bankruptcy or liquidation. In contrast to Junior Debt, it offers lower interest rates to investors and is typically backed by collateral protection. As a result of the collateral backing, it is less risky.

Senior debt is a company's primary and most significant debt source. It is a less expensive source of debt financing for the issuing firm.

Senior debt investors are less concerned with the company's profitability and development than receiving their principal and interest return on schedule. Owing to a lack of collateral, it is difficult for startups or small enterprises to obtain senior debt.

Senior unsecured loans are even paid ahead of junior debts, with the debtors having a shallow risk of losing capital.

Junior debt is a form of non-current debt that has a lower priority than senior debt and receives second priority for repayment in the event of bankruptcy or liquidation. In contrast to senior debt, it offers investors higher interest rates and is usually not backed by any collateral. As a result, it's riskier.

Junior debt is a company's least significant debt, a more expensive form of debt financing than senior debt. The issuing company prefers to use junior debt after exhausting all other senior debt options.

Apart from receiving dividends, junior debt holders are concerned about the company's profitability and growth.

There's a chance the business could default on junior debt but not on senior debt.

Small companies are better off with junior debt than senior debt because they do not have any collateral and small banks are more willing to lend to them.

Junior debt holders face a high risk of losing money, with the possibility of losing the entire principal amount if things don’t go the right way. It is paid only after senior debt. 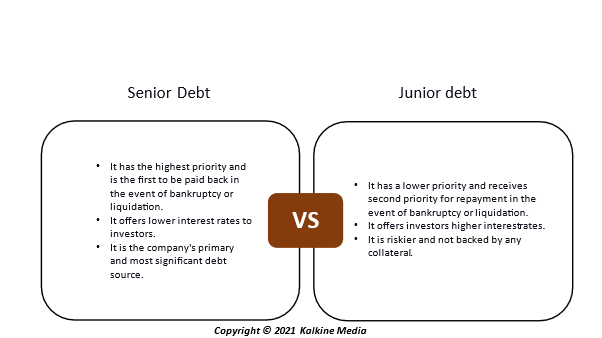 What is an example of junior debt?

In the event of bankruptcy, senior lenders are the first to get their hands on any remaining funds. As a result, junior debt lenders are more likely to be taken advantage of, which is one reason why some lenders insist on senior status before making a loan.

Because of the potential lack of collateral, subordinated status, and therefore increased risk of not being able to get its hands on any of the scraps, if ABC goes bankrupt, bank XYZ could charge a higher interest rate on loan.