What are Bond Markets?

Fixed interest instruments have been present since ages in some form or type. But bonds grew popular in the early 20th century after the entry on the New York Stock Exchange. In the mid-20s, the market makers developed a penchant for trading bonds in lots to generate a mark-up on the block trades, which were largely sold to investors like insurance companies or banks.

Bonds are usually traded over the counter (OTC) because of large lots and size of trades. Even exchange-traded bonds also end up at OTC markets because of higher liquidity levels. But derivatives like options, future on bonds and convertible bonds are traded in an exchange.

How are bonds traded?

A new bond offering in the primary market either goes public through auction or bought deal. In a bought deal, the market makers, which include fixed income dealers and investments, bid for the offer and issuer picks up the best deal available.

In an auction, a buyer bids for his/her part of investment in the bond at a certain price, which he/she feels is appropriate after incorporating existing market environment and fair value of the bond. Bond auctions are very popular among investors, and Government bond issues generally undertaken under auctions.

After primary markets, the bonds are available in secondary markets but are traded over the counter, unlike stocks in the exchange. Stock exchanges are more transparent than OTC markets because trades are reported on an instant basis.

In OTC markets, the bond dealers engage with investors to undertake a transaction, which is not reported like equity trades are reported in an exchange. Market participants are generally unaware of the latest transactions taken for a bond.

Investors engage with market makers to conduct a bond transaction. Market makers may buy bonds even if they don’t have buyers, and make money by bid-ask spread, which is the difference between bid price and ask price.

Read: Bonds or shares: more to do with an investor's strategy than market scenario

What are the types of bonds? 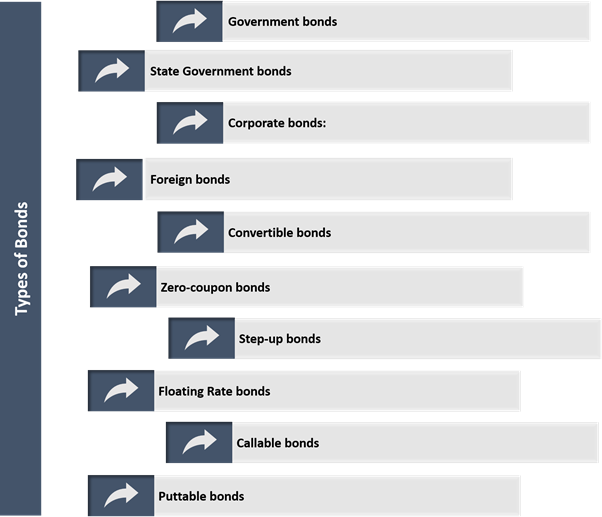 Government bonds: Government bonds are the most popular bonds in the bond market and have relatively high liquidity levels compared to other bonds. These bonds can also include with ones having maturity of less than one year to say 30-year bonds.

Since these bonds are issued by Sovereign Governments of the nation, the risk is perceived lower compared to other bond issuers. But the risk within Sovereign bonds is more related to creditworthiness of the issuing country that is denoted by credit ratings.

Corporate bonds: Corporate bonds are issued by companies primarily to fund capital investment. These bonds are perceived riskier than Government bonds due to the issuer being a private organisation. As a result, the higher risk in Corporate bonds is compensated with a relatively higher return.

Pricing and yields of corporate bonds also depend on financial outlook and reputation of the business, while other factors impacting corporate bond prices include interest rates, credit rating of the issuer.

Foreign bonds: A foreign bond is issued by an overseas country in a domestic market in domestic currency. These bonds are called Foreign bonds because they are listed in foreign and denominated in foreign currency. Investors invest in Foreign bonds to diversify portfolios and get better interest rate exposure. But there remains a currency risk depending on exchange rates.

Convertible bonds: Convertible bonds give the holder a right to convert holdings into predefined number common stock. These bonds are issued by corporations and attract investors because of higher yields than government bonds and an option to convent holding into stocks.

Zero-coupon bonds: Zero-coupon bonds do not carry interest rate or coupon. Also called accrual bonds, these bonds are issued at a steep discount since there are no coupon payments, and maturity at full allows to realise a gain in such bonds.

Must read: Are Bonds really a boring investment option?