To reduce the amount of aggregate demand in an economy, the government put various fiscal and monetary policy measures, which are referred to as deflationary. Such policies are adopted when there is a considerable rise in inflation, raising the need for an action to diminish the rate of economic activity. Reducing the economic activity in the economy can be done by lowering consumption expenditure, investment expenditure, government spending, increasing imports or lowering exports.

Why is inflation a cause of alarm?

Inflation hurts economies because investments and business decisions are heavily impacted. People's financial savings decline due to inflation. The anticipation of future rise in prices is also a reason producers or suppliers hoard goods. Finally, the most significant danger associated with inflation is the risk of it going out of control and crippling the entire economy due to hyperinflation.

Why do economies need deflationary policies?

Let us understand using a diagram when is there a need for deflationary policies in an economy. 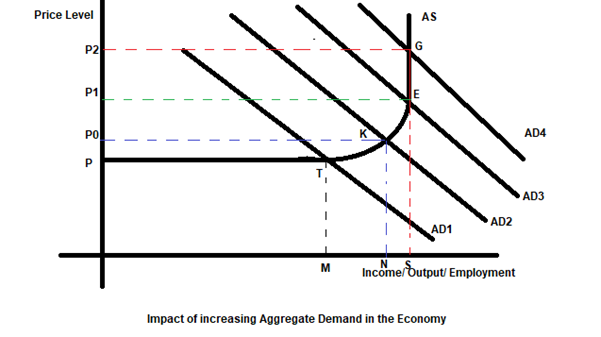 The aggregate supply curve of the economy has the shape as seen because initially, in the short-run, production cannot be suddenly expanded, so output remains more or less constant. Gradually output begins to increase as seen in the segment T to E. Every economy has limited resources; thus, output cannot expand beyond a point in the long run, as is seen in the perfectly inelastic segment of the AS curve beyond point E. In straightforward terms, the AD curve is downward sloping because as price level declines in an economy demand for money and interest levels decline. As a result, consumption, investment, government spending, and net exports increase.

What are the various deflationary policies?

The components of aggregate demand are consumption, investment, government spending and net exports. Deflationary policies aim to reduce one or more of these components to bring a decline in general price levels in the economy. Countries and their central banks use monetary policies or fiscal policies for curbing the situation of excess demand in the economy

Monetary policy is an important deflationary policy employed by economies. It is a policy to reduce aggregate demand in the economy by regulating interest rate and credit availability. Monetary policy is used to increase the cost of credit.

Business must be discouraged from borrowing more. Thus as an anti-inflationary policy, rate of interest must be raised. The central bank may increase the bank rate as a deflationary policy. Bank rate is the rate at which central banks lend to commercial banks in the economy. Increasing the bank rate increases the cost of funds. Interest rates in the markets also increase simultaneously.  Borrowing becomes costly and so demand declines in the economy. This policy is sometimes also called the dear money policy. Increasing interest will also bring down investments and cumulatively reduces the aggregate demand. In addition, the increased interest rates will encourage people to save more and thus reduce consumption expenditure. People with mortgages also see a decline in disposable income which again can be a reason for cutting down in consumption expenditure. Higher interest rates can also improve the exchange rate- this encourages imports and brings a decline in exports

To curb the increased aggregate demand in an economy, the country's central bank sells government bonds in open market operations so that money supply in the economy declines and thus so does aggregate demand.

Tax rates too may be increased to decrease people's real income and therefore reduce the consumption power of consumers. As a result, aggregate demand in the economy would decline. Similar would be the effect of reduced government spending. These are fiscal policy measures employed as deflationary policies.

Policies for wage growth may be deferred in situations of inflation so that disposable incomes of citizens do not increase and thus aggregate demand too remains controlled.

How do deflationary policies work?

Using any of the deflationary policies mentioned above, when aggregate demand shifts from AD2 to AD1, the general price levels in the economy changes, inflation declines as there is a movement from OP' to OP due to the leftward shift of the AD curve, as shown in the diagram below. 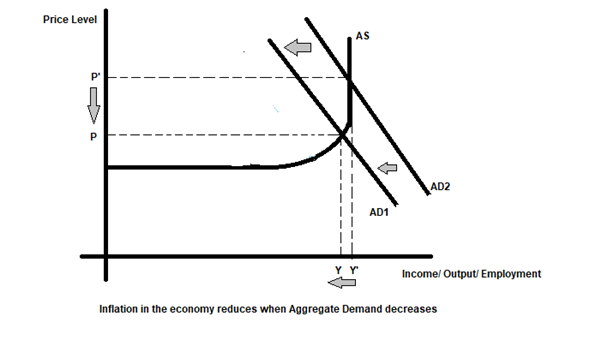 Vaccination proof required in Western Australia: All you need to know