The prevailing scenario dominated by increasing electric vehicles take-up and skyrocketing gold prices appears to widen the exploration prospects of key projects held by Renascor Resources Limited (ASX: RNU). The Company piggybacking its extensive resources is advancing on the right track, as it continues to turn lucrative opportunities into successful outcomes.

Renascor’s planned and well-balanced approach in managing different projects has served as a catalyst for growth. Notably, the Company had advanced its 100% owned Carnding Gold Project focussed on near-surface, high-grade gold in an emerging South Australia gold province. Simultaneously, the Company has progressed its Siviour Graphite Project, including with the recent conclusion of a Battery Anode Material Study that confirms the potential to offer low-cost Purified Spherical Graphite to the emerging battery minerals market.

The recent advancements are a testament to the Company’s dynamic methodology, which is in rhythm with its steady style of developments focussing on different aspects of growth.

With this backdrop, let us delve into recent undertakings of the Company at different projects that seem boosting the growth trajectory of its exploration activities.

ALSO READ: Lens through the Corporate Directory of Renascor Resources

Expansion of the Project

Soyuz, Mir and Sunshine gold prospects are the newly identified prospects at the project. 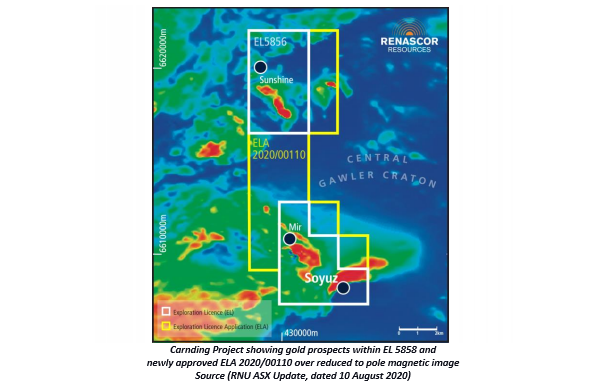 Renascor is progressing its exploration endeavours at the Soyuz Prospect. Multiple shallow, untested gold targets along-strike have been identified along-strike from the prospect.

An induced polarisation survey identified the new targets, confirming an anomalous zone lying within a coincident geochemical and magnetic anomaly. It lies ~500m along-strike of the previous high-grade drilling at the prospect.

The Company believes that the IP zone contains high priority drill targets and plans on incorporating the IP anomaly in forthcoming drilling programs planned at Soyuz.

Renascor is making significant progress in advancing its 100%-owned Siviour Graphite Project in South Australia, with Battery Anode Material Study confirming the value of integrating Purified Spherical Graphite (PSG) processing operations with its Siviour Project. The key findings of the study confirm the integration to be a world-class, low-OPEX project with compelling economics and alignment with off-takers.

The PSG integration would facilitate the diversification of PSG supply chain outside of China, which currently commands 100% of PSG production. 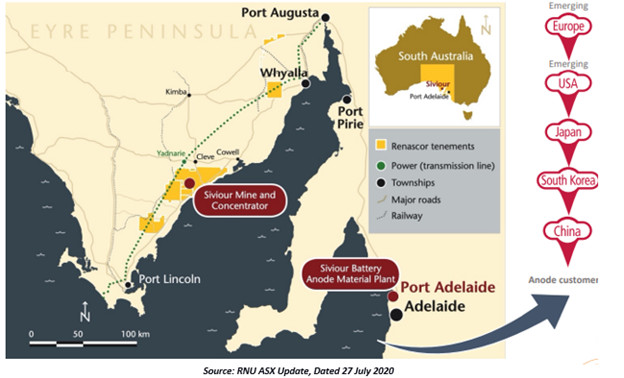 Renascor’s exploration and development focus aligns with the dynamic trends and prospects, as the Company taps its projects’ high-grade, mineral-rich potential to churn out impressive results. Meanwhile, the steady progress bolstered by well-balanced approach seems to put its robust projects on the sweet spot.