Australian mineral developer, Renascor Resources Limited (ASX: RNU) with a portfolio of assets in South Australia’s key mineral districts appears highly driven towards the development of its core asset, Siviour Graphite Project, into a world-class graphite mining operation. The project is expected to unlock high-growth capabilities, allowing the Company to leverage the market prospects by virtue of its vast resource base and compelling project economics.

The potential of integrating a PSG processing with Siviour Graphite Project has been backed by robust study results, stimulating the Company’s efforts towards the development of the world’s first integrated, in-country mine and battery anode material operation beyond the frontiers of China. The projected robust uptake of electric vehicles catalyses Renascor’s lucrative development plans for its flagship project in the buoyant graphite marketplace.

At the same time, Renascor appears to be strategically guided by its critical financial undertakings. Notably, Renascor engaged with a leading Nordic investment bank, ABG Sundal Collie for managing the proposed debt financing for the integrated Siviour Graphite Concentrate and PSG Project. The Company has also received a Letter of Support from the Australian Government’s official export credit agency, Export Finance Australia (EFA) for the provision of finance. Moreover, it has received a Letter of Interest from the official ECA of the Dutch Government, Atradius Dutch State Business, for up to ~60% of start-up capital requirement for Siviour Graphite Concentrate Project.

With this backdrop, let us explore Siviour Project and the proposed PSG integration by Renascor Resources.

Siviour Graphite Project is a low-cost, world-class graphite asset, hosting one of the largest graphite resources, globally. The scale-grade and near-surface of Siviour orebody having flat-lying orientation highlights the potential for production of high-quality graphite products at a low cost over long-term mine life.

The project is well-advanced into the approval process with a mineral lease granted by the South Australian Minister for Energy and Mining and extensive environmental review completed.

Results of the Siviour Definitive Feasibility Study (DFS) for graphite concentrate production confirmed Siviour’s globally competitive economics. Siviour’s shallow, horizontal orientation of a single massive ore body offer one of the lowest projected operating costs of any graphite mine in the world.

Siviour’s unique potential is further strengthened by Renascor’s plan to integrate the graphite concentrate operation with a downstream PSG processing operation. By producing the downstream PSG product, Renascor aims to be the first in-country vertically integrated PSG producer outside of China and therefore offer lithium-ion battery makers diversity of supply from from China, which currently controls 100% of PSG processing.

The battery anode material operation would have a manufacturing plant of PSG located near Port Adelaide at an industrial site. The infrastructure availability involving an industrial precinct offers road access along with the ready availability of necessary supplies such as electricity and water, aiding in the reduction of capital requirements.

The operations, owing to presence in an industrial precinct, permit the commissioning and operation of the proposed plant. Meanwhile, more limited risk of issues connected with water contamination, heritage protection and other community standards is also offered by the site.

Transport costs are minimised via limiting movement along the planned mine-to-port transport route for the Siviour graphite concentrates. The Company expects relative cost-savings through avoidance of additional transport and logistic costs, as like other potential PSG operations, it does not propose exporting graphite concentrates to third-countries for processing.

Renascor has undertaken three years of PSG test work, which encompasses micronisation, spheronisation and purification tests, to evaluate Siviour Graphite Concentrates.  This work has confirmed the Siviour’s ability to be processed into high-purity PSG conforming to industry specifications for the lithium-ion battery anode market. 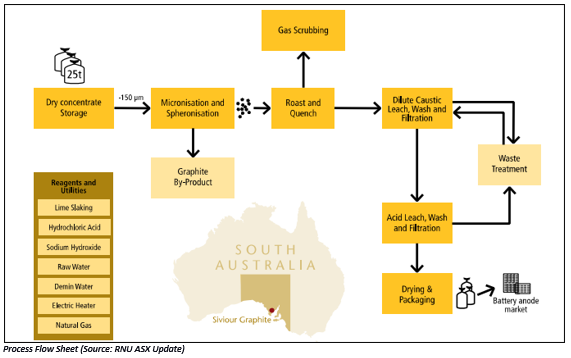 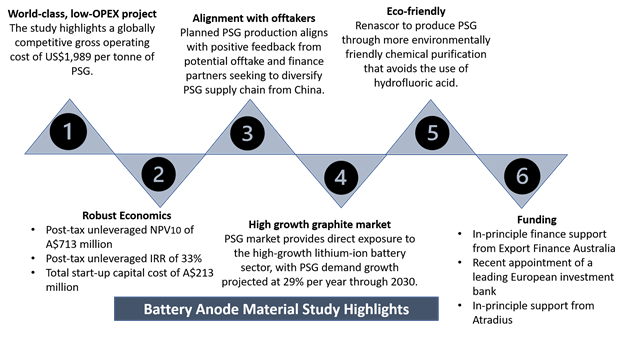 The globally competitive gross operating cost of US$1,989 per tonne of PSG in conjugation with planned PSG production averaging around 28,000 tonnes per annum is expected to aid the Company in advancing ongoing finance and offtake discussions. Furthermore, environmentally friendly chemical purification during PSG production by avoiding the hydrofluoric acid usage satisfies sustainability requirements of end-users and potential financiers. 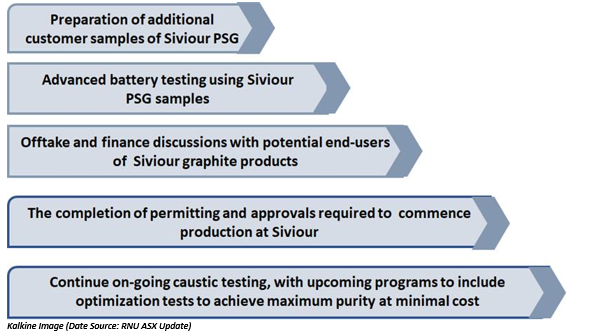