The independent tests undertaken by German graphite specialist ProGraphite GmbH have confirmed that Siviour PSG meets strict physical and chemical product specifications that are required for integrating PSG into lithium-ion battery anodes. The test results are validation to Renascor’s plan of becoming a low-cost PSG supplier in the first integrated in-country mine and battery anode materials operation, stationed outside of China.

Commenting on the results, RNU Managing Director David Christensen stated that the results demonstrate that Siviour graphite can be upgraded to strict battery industry specifications for PSG by employing the cost-competitive and eco-friendly process embraced in the Battery Anode Material Study. He also pointed out that the recent result is a crucial step in qualifying Siviour PSG for utilisation by lithium-ion battery anode manufacturers. The results are planned to be used for supporting ongoing offtake discussions.

Graphite concentrates used as samples during the tests were 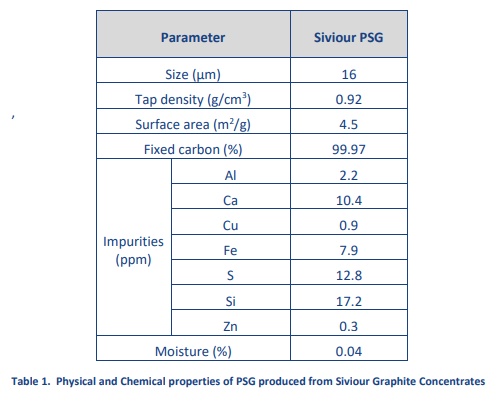 The notable results also offer the basis for adjusting Renascor’s production parameters for producing larger-scale samples for customer qualification purposes and further meeting quality control requirements for other PSG products. It includes requirements for PSG sized to 10 µm which is a less common, but premium-priced PSG product.

PSG is witnessing significant growth in demand, with a forecast annual growth rate of up to 29% per year through 2030.

Siviour Graphite Project is believed to be uniquely positioned to profit from the EV market growth via leveraging off the comparatively low-cost of it achieves in its mining operation, from which it projects to produce Graphite Concentrates at amongst the lowest cost globally. Since Graphite Concentrates are the key raw material feedstock for producing PSG, Renascor can pass the cost-savings from the mining operation onto the downstream PSG production.

Compared to other potential PSG operations, Renascor has a key competitive advantage as it benefits from obtaining Siviour Graphite Concentrate feedstock at cost of production, rather than market price. This price difference has an exaggerated impact on PSG operating costs because only half of the Graphite Concentrates used as feedstock are spheronised to PSG during the milling process. As shown below, this translates into a major cost savings for Renascor’s vertically integrated PSG production operation. 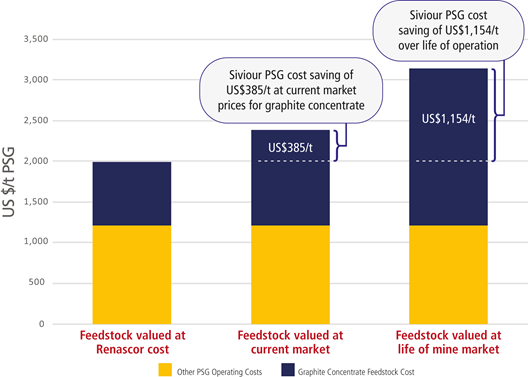 China currently accounts for 100% of PSG production, and Renascor’s first in-country mine and PSG operation is expected to provide a viable alternative for diversification of the supply chain, outside of the Asian country.

Battery Anode Material Study indicated that a vertical integration of a PSG processing operation with the Siviour project would result in significant value addition, while also offering supply chain security through the proposed PSG operation outside of China.

Key highlights from the study included:

For a detailed look on study results, please click here.

Notably, caustic roast purification method involves the combination of Siviour graphite with a caustic solution followed by roasting at low temperature prior to being leached with hydrochloric acid. The process is more environmentally friendly compared to the one using hydrofluoric acid, which is generally adopted in China.