Staying ahead of the curve with notable developments, Renascor Resources Limited (ASX: RNU) is advancing well towards building a domineering presence in the battery-commodities market. In a significant development, the Company unveiled promising results from ‘Battery Anode Material Study’, targeting the assessment of an integrated mine and battery anode material operation for producing PSG for lithium-ion battery anodes.

The latest results validate the Company’s flagship Siviour Graphite Project’s competitive edge in the high-growth lithium-ion battery market and are expected to assist in securing offtake commitments for permitting Siviour’s financing and development.

The Company is progressing on the back of relative advantage offered by Siviour Graphite Project in terms of ability for producing graphite concentrates at one of the lowest graphite development costs in the world. Notably, Renascor recently remained focussed mainly on progressing the development of its Siviour Project, especially on the production of battery-grade PSG.

The study indicates that PSG by Renascor has a globally competitive gross operating cost of US$1,989 per tonne. The favourable position of Siviour’s PSG is backed by Renascor’s market data indicating that all the existing commercial PSG operations, which are in China, have comparatively higher average operating costs of ~ US$2,000 per tonne. 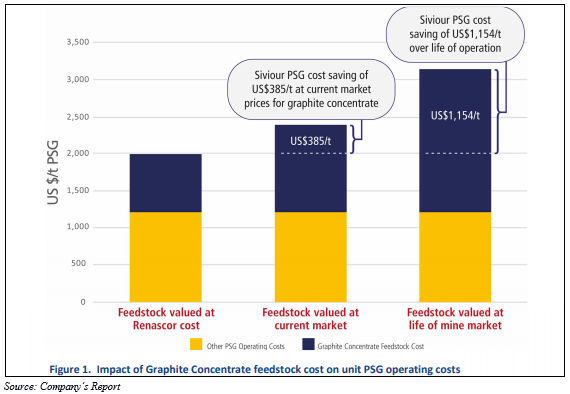 The compelling economics of a combined mine and battery anode materials operation have been confirmed by the study results, including 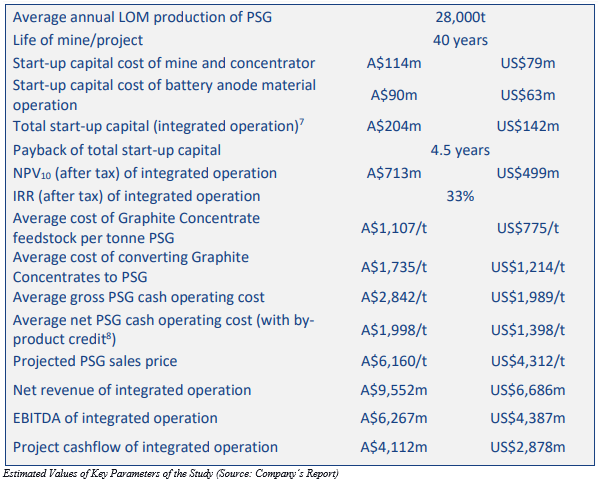 China currently commands 100% of downstream process capacity for the conversion of graphite to PSG. However, Renascor is planning PSG production of 28,000 tonnes per annum on an average, expected to reduce the supply dependence for graphite concentrates and PSG on overseas Chinese players and downsize the perceived supply chain risk to Australia.

In addition, the in-country Australian processing with battery anode material operation situated within the planned corridor of Siviour graphite concentrates in Port Adelaide does not impose additional shipping cost.

The Company has garnered positive feedback from potential off-takers and finance partners who are eyeing to diversify the supply chain from China.

For the integrated mine and battery anode material operation, the Australian explorer has received firm support for debt financing. It includes in-principle finance support from Export Finance Australia and the recent appointment of a leading European investment bank. The Company has also secured in-principle support from the official Dutch Export Credit Agency, Atradius for the mine and concentrate operation.

With emphasis on the integrated mine and battery anode material operation, Renascor plans on continuing the Siviour Graphite Project development.

The planned work programs include: