The jubilant journey of Australian mineral developer Renascor Resources Limited (ASX: RNU) appears to be lined with striking developments aiding in not only meeting the critical milestones but also attracting the interest of potential offtake, finance partners and end users. The triumph-simmering efforts of the Company drawing substantial energy from the ongoing market condition have chalked up a series of monumental victories in a short span.

Unfolding the mystery and to simply put it, it is crystal clear that Renascor Resources via its Siviour Graphite Project is surfing the high tide to become the world’s first PSG producer, outside China.

The synergy between the market potential of PSG and the current developments regarding Siviour’s Battery Anode Operation has been harvesting effective results for Renascor, which currently seems to bask in the exploration-centric triumphs.

Furthermore, the Updated Mineral Ore Reserve has added another notch on Renascor’s belt. The Company’s 100% owned flagship Siviour Project has been confirmed as the largest reported total Graphite Ore Reserve outside of Africa, and the world’s second-largest reported Proven Reserve of graphite.

Renascor has completed a Definitive Feasibility Study that demonstrates that Renascor’s Siviour Project enjoys a cost advantage in producing graphite concentrates. The Battery Anode Material Study shows that this cost advantage can be further leveraged off by the integration of an in-country Purified Spherical Graphite manufacturing facility, which would use Siviour’s graphite concentrate as feedstock. Significantly, the study indicated a globally competitive gross operating cost of US$1,989 per tonne of PSG.

The study has also confirmed the robust economics of a combined mine and battery anode materials operation, with post-tax unleveraged NPV10 of $713 million and post-tax unleveraged IRR of 33%. The total start-up capital cost of $213 and an average annual EBITDA of $156 million has been indicated.

Renascor’s PSG processing involves ecologically friendly chemical purification, which by avoiding the use of hydrofluoric acid, meets the sustainability requirements of end users and prospective financiers.

The Company plans on locating the PSG processing plant in an industrial zone between the mine site and the shipping port (Port Adelaide), which would provide advantages such as infrastructure availability reducing capital requirements, operational cost savings, and regulatory and environmental benefits. 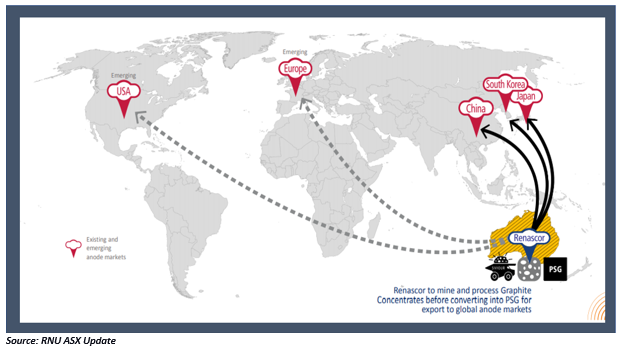 The booming prospects for PSG seem to cradle the Company’s forward endeavour and planned outlook. The commencement of a global trend in the form of electric vehicle growth has largely spurred demand for minerals used in lithium-ion batteries. Graphite being the critical element in lithium-ion battery anodes is anticipated to witness rising requirement to meet the forecast growth rate of batteries.

PSG has more direct exposure to the EV sector, owing to its exclusive application in lithium-ion batteries.

The supply dependency for PSG on China, which 100% controls the natural Purified Spherical Graphite production, can be significantly reduced via Renascor’s first in-country mine and PSG operation outside of China.

Renascor, bolstered by its existing project-centric strengths, appears to be on the right track to capture the immense growth prospects offered by Graphite and PSG market. The Company has aligned its activities to suit the satisfaction of budding market requirements while also ensuring that the growth momentum is maintained consistently.

The Company has conducted the Battery Anode Material Study to assess an integrated battery anode material operation, which has indicated that PSG processing operation with its Siviour Project generates significant added value.

Renascor plans on the continuation of Siviour development, targeting the integrated mine and battery anode material operation. The upcoming strategic work programs would encompass notable endeavours.