The outcome validated tungsten (wolframite) mineralization continuity, with the primary drill hole located around sixty metres along strike from the pre-existing drill hole intersections. Rafaella aims to expand the resource base, and the tungsten mineralisation intersected, east of JORC (2012) Inferred MRE, with the initial results supporting its ambition.

These results come from the upper 150m of the drill hole with assays pending for the remainder of the hole (end of hole depth 213.85m):

15 drill holes have been completed on the Project totalling 1,636m as on 23 October 2019, with the majority occurred in and adjacent to the operating aggregate quarry area. This is the area where the majority of the JORC (2012) Inferred MRE was formerly defined.

The Company has concluded a contract with Sondeos y Perforaciones Industriales del Bierzo, S.A, to use a reverse circulation rig, currently drilling the highly prospective Eliseo prospect to the east of the quarry.

Moreover, Geonor Sondeos y Peforaciones, S.L., the local drilling contractor, has two diamond drilling rigs at the site, presently drilling around the Quarry prospect, and is likely to bring about a third rig in the coming two weeks.

With the mining approvals in place, German Government development funding secured, and commencement of positive feasibility study, RFR is pacing the project through to the production stage and early cash flows.

With Tungsten’s consumption growing in line with the world economy, the steel-grey metal has long been considered strategically important. The overall tungsten demand is expected to grow at around 1% per year (on an average) over the period to 2030. The current market price is around US $270 per metric tonne unit. 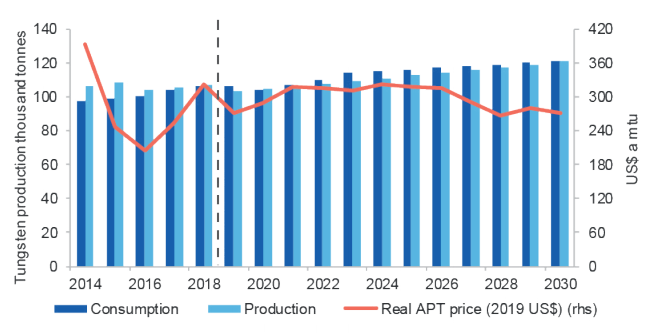 Lucrative Properties And Uses Of Tungsten

Besides the newly acquired Santa Comba Project, RFR owns the Sandstone gold project in Australia and the McCleery cobalt and copper project in Canada, which were under-explored Projects but retain significant potential.