Calima Energy Limited (ASX:CE1) is an Australian-headquartered oil & gas company with more than 63,103 acres of drilling rights over the Montney Formation in British Columbia, the most dynamic oil & gas play in Canada. Backed by a considerable improvement in the Canadian gas market situation over recent years, Calima has established a material position in Canada’s tier 1 petroleum province, which favourably competes with the finest of US resource plays.

The Company possesses highly proficient management team, which has played an instrumental role in making Calima Lands ready for development project. At present, the Company’s primary ambition is to drive its Montney asset to production phase in the next few months under steady market conditions.

Having said that, let us quickly scroll through two key operational objectives formulated by the Company for 2020:

Calima intends to manage Tommy Lakes and Montney assets with capital efficiency in 2020 while preserving the asset for future production. Besides, the Company aims to evaluate the potential re-use of Tommy infrastructure to lessen capital costs to bring Montney acreage on-stream sooner.

The Tommy Lakes Infrastructure lies immediately to the north of Calima Lands and provides the closest and most cost-effective tie-in to processing facilities and sales pipelines. 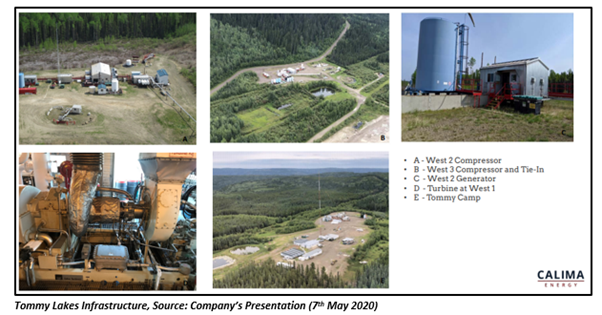 The Company finalised acquisition of Tommy Lakes Infrastructure in April this year, thereby getting pipeline access to domestic, regional and US markets through key pipeline networks like T-North, Alliance and NGTL. Following the completion of acquisition, Calima Lands is now a development-ready project.

The acquired infrastructure included compression facilities, associated pipelines and facilities capable of carrying up to 50 million cubic feet per day of gas and 2,500 barrels per day of condensate. The fully permitted facilities are presently in excellent condition and have been preserved for future recommissioning, with their replacement cost projected at $85 million.

It is imperative to note that Calima already has regulatory approval to build and operate a 19.5 km steel 8-inch service pipeline connecting current and future Calima wells to West 2 compressor facilities in Tommy Lakes Field. Moreover, the pipeline is likely to provide connections to main sales lines via NorthRiver Midstream Jedney facility (NGTL, Alliance and T-North).

The Company has no plans for further development work until a Final Investment Decision (FID) is taken.

The Montney region experienced some major acquisitions in February 2020, reflecting progress towards consolidation of acreage positions across the area. In its March 2020 quarterly activities report and May Investor Presentation, the Company highlighted about the acquisition of Chinook Energy, Polar Star Canadian Oil and Painted Pony acreage for ~C$90 million by Tourmaline Oil Corp. The Polar Star acreage is situated immediately to the south east, whilst the Chinook acreage is located further to the south, of Calima Lands.

Calima witnesses these acquisitions as a logical step ahead of the anticipated increase in demand for LNG feedstock in Canada and expanding pipeline capacity.

In 2020, the Company intends to capitalise on windows for corporate activity as Canadian Energy Policies change and look to support the sector. Besides, CE1 plans to pursue opportunities to add reserves capable of delivering near-term profitable production with growth upside, as markets recover further.

With its core assets in Montney Formation and favourable gas market situation, Calima Energy seems well-positioned to attain its operational objectives in 2020. Despite the existing market turmoil, the Company believes its working capital position has 18 to 24 months of running room.