The other major milestones achieved during the year were: -

It is also notable to mention that the remaining acreage of the Company is held under five-year drilling licences that require drilling for further conversion into lease grants, mostly maturing in 2022.

It is expected that extra modular design would be necessary at the site in order to have capacity for a 20 well pad.

The pipeline capacity is expected to be up to 50 Mmcf/d and 1,500 bbls/d of wet gas and well-head condensate, respectively.

Come 2020; CE1 strategies have continued to place well in line with the commercialisation of Calima Lands. Despite the recent tumbling oil prices and volatility in the global market with the advent of COVID-19 outbreak, the Company seems well positioned to endure the existing challenges and composed to take advantage from any market improvement.

The facilities of Tommy Lakes Infrastructure such as compression facilities, associated pipelines and other infrastructure are strategically situated 20 km north of the Calima Lands, aiding the Company with the advantage of export routes to T-North/Station 2, NGTL/AECO and Alliance. Further, it provides access to gas transportation to the proposed Shell/Petronas' LNG Canada Facility and Kitimat Woodside/Chevron LNG Facility and post the increased pipeline capacity.

It is also notable that Tommy Lakes Infrastructure Facilities are in excellent condition and are estimated to involve A$85 million of replacement cost and A$825,000 of purchase cost. 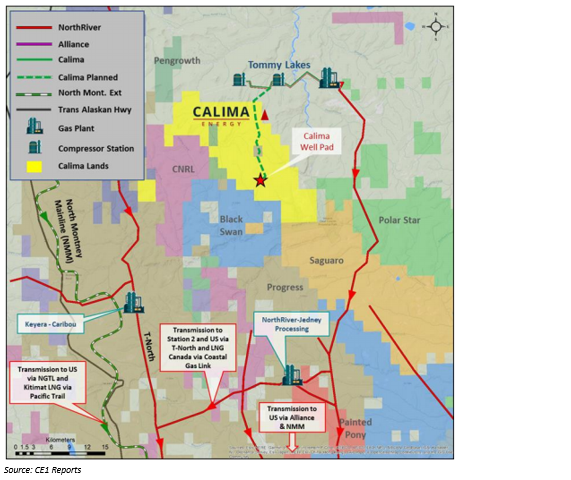 Field Development Plan (FDP) & Final Investment Decision (FID): The acquisition of Tommy Lake Infrastructure is an essential step toward FDP, making Calima Lands a ready-for-development project, allowing production to commence as early as 6 months from FID. The Company does not intend to carry out FDP until FID is completed, subject to securing fund via either a JV and/or project financing.

Calima Energy Strategic Forward Plan: During end-March 2020, the Company also update the market with management shift to Canada. The Tommy Lakes acquisition, along with management shift, is anticipated to maximise the shareholder value. For the same, CE1 plans to maintain healthy balance sheets and overhead cost reduction.

The changes occurred in the announcement are: -