Calima Energy holds more than 63,103 acres of drilling rights over the most active oil & gas play in Canada, the Montney Formation, with Calima Lands being its key asset, in British Columbia. The near-term objective of the Company is to bring Calima Lands into production, which is expected to be accomplished within the next 6-9 months under stable market conditions.

It is imperative to note that the Company’s activities during the quarter were primarily centred around its flagship Montney Formation project. In this context, let us scroll through the key developments undertaken by CE1 during the March 2020 quarter:

The most notable development of the Company during the quarter was securing the acquisition of Tommy Lakes Facilities (“Facilities”), situated immediately to the north of the Calima Lands. The Company entered into an agreement to acquire fully permitted Facilities, including compression facilities, infrastructure and associated pipelines in the Tommy Lakes Field in February this year. 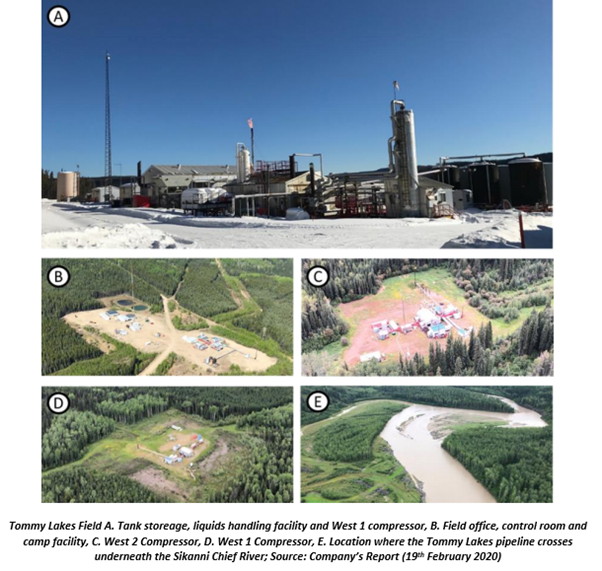 However, the Company completed the transformational acquisition of these Facilities in April 2020. The acquisition cost of the Facilities came at ~$750,000, with holding costs estimated at $500,000 per annum.

With a replacement cost projected at $85 million, the acquired Facilities are in excellent condition and have been preserved for future recommissioning. Moreover, the Facilities save an operator’s three years in permitting and authorisation.

The acquisition has not only provided the Company with a cost-efficient access to Jedney processing facility and NorthRiver Midstream pipeline, but also access to regional markets through the key pipeline networks comprising NGTL, Alliance and T-North. The capability of the compression facilities, gathering pipelines and associated facilities to transport up to 50 million cubic feet per day of gas and 2,500 barrels per day of condensate, further adds to advantages of this acquisition.

With the completion of acquisition of Tommy Lakes Facilities, the Calima Lands are now ready for development. The management focus is now on finding JV partners and/or funding to take advantage of the investment and to realise value for the investment, for which the Company has appointed ex- Macquarie Bank personnel Chase Edgelow in an advisory capacity.

In order to focus on strategies to maximise and unlock shareholder value through joint ventures, third party investment, partnerships and/or corporate transactions, the Company made a strategic movement of management to Canada, shifting the responsibility of operations to the Calgary office.

To retain balance sheet strength and preserve flexibility until the market improves, the Company also implemented significant cost-cutting measures during the quarter.

Validating the significance of the Montney Formation, the Company notified about the regional activity undertaken at Montney by oil & gas exploration and production firm, Tourmaline Oil Corp, in its latest quarterly activities report.

The Company stated that Tourmaline Oil Corp declared the acquisition of TSX-listed Chinook Energy, unlisted and private equity backed Polar Star Canadian Oil and approximately 17 sections or 8,460 net acres in the North Montney for an aggregate consideration of C$82 million during the quarter.

The Polar Star acreage is immediately to the south east; however, the Chinook acreage is further south, of the Calima Lands.

As Tourmaline is the largest natural gas producer in Canada, the Company believes the significance of its acquisitions specify the initial steps towards a consolidation of acreage positions across the Montney which would appear to be a logical step in front of an expected increase in demand for LNG feedstock in Canada and mounting pipeline capacity.

The Company cited that it forward sold C$1.2 million of net production revenue from the Paradise well for a total consideration of C$1 million in March 2019.

The Paradise well is situated 180 km to the southeast of Calima’s extensive Montney interests in northeast British Columbia and 40km to the northeast of Fort St John. The well produced an aggregate of 1,581 barrels of oil in the March 2020 quarter, averaging ~22.6 barrels of oil per producing day and was shut-in on 19th March 2020 as a result of reduced pricing.

The Company mentioned that the forward sale facility is reimbursable from monthly net well production over a period of three years, maturing 1st April 2022.

Moreover, the Paradise well resulted in net revenue payments of C$314,120, leaving C$885,930 outstanding as at 29th April 2020. In case of a shortfall, the lender can require repayment of the outstanding balance in shares (20-day VWAP), subject to shareholder approval, or in cash.

Calima Energy’s working capital position as at 30th April 2020 stood at $3.6 million, after adjusting for acquisition and suspension costs of the Tommy lakes facilities and estimated outgoings to the end of April 2020, and a Canadian GST refund of ~$1.3 million due in May 2020. The Company made payments of $70,304 to related parties and their associates during the March quarter.

CE1 expects significant savings from its cost-cutting measures in the future, as indicated in the table below:

Additionally, the Company anticipates having an estimated $1.9 million in working capital as on 31st March 2021, based on current contracts and anticipated expenditure.

Calima Energy seems well-positioned to progress with reduced overheads, a significant primary gas resource, a gas and liquids facility connected to sales markets and a working capital position of $3.6 million at end-April 2020 supporting business until early 2022 despite the market turmoil. The Company intends to pursue opportunities to add reserves capable of delivering near-term profitable production with growth upside as markets recover further.