Perth-headquartered oil & gas entity, Calima Energy Limited (ASX:CE1) certainly deserves praise for the pace at which it advanced the Calima Lands towards a development ready project. Calima Lands is one of the Company’s key assets situated within a liquids-rich sweet-spot of the Montney Formation in NE British Columbia (BC), the most active oil & gas play in Canada.

Calima owns and operates 100 per cent stake in 63,103 acres of Montney drilling rights in BC. The Company has so far made remarkable progress at Calima Lands, in line with its overarching strategy focused on creating value for shareholders via:

In this regard, let us discuss the Calima Lands timeline since its acquisition in 2017 below:

As a consequence of its successful bids in the December 2017 government land auction, Calima’s core acreage holding in NE British Columbia grew to 72,014 acres of drilling rights (105 drilling sections) over acreage believed to be highly prospective for the Montney Formation.

This led to the completion of Calima’s acreage acquisition strategy, post which the Company shifted its focus towards all the operational work required to drill wells optimally located and created to demonstrate the value of the Calima Lands.

It is important to note that about 7,542 acres of drilling rights in areas, referred to as Pocketknife expired prior to 31st December 2019. The Company let these areas expire in due course, as these areas were likely to be expensive to include in a field development plan, owing to their shape and separation from the contiguous core region.

Calima successfully completed a three-well drilling campaign (9,353m) in 2019, with its drilling team delivering the performance that matched with best-in-class drilling performance of other operators in the area. 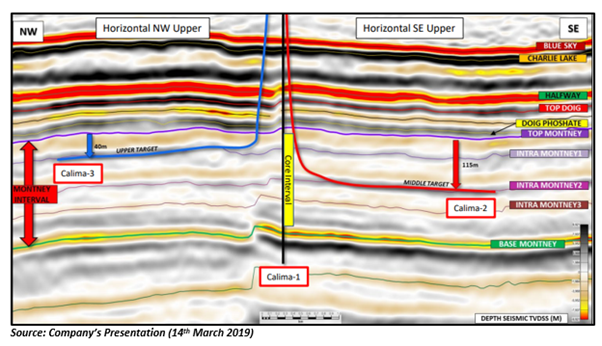 Three wells (1 x vertical – Calima-1, 2x horizontal – Calima-2 and Calima-3) were drilled as part of the campaign, and the results exceeded Calima’s expectations, which included:

In an independent review of the drilling results, GLJ Petroleum Consultants noted that the Company’s focus on intense simulation facilitated the Calima-2 well to attain above-average performance. Moreover, the consultants observed the following:

Success of the three-well drilling campaign allowed Calima to convert approximately 60 per cent of its core acreage (49 sections of land) to 10-year production leases, covering 33,643 acres. Most of the remaining licences over the Core Lands are likely to mature over 2021/22. 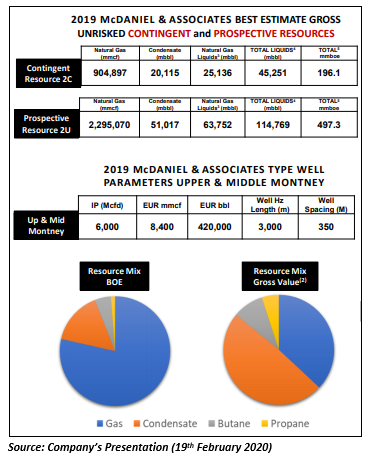 Calima successfully acquired Tommy Lakes Infrastructure, including pipelines and facilities in Q1 2020, materially under budget at a cost of $750k, with holding cost anticipated to be at $500k per annum.

The acquisition provided the Company with a cost-effective connection to NorthRiver pipeline and processing facilities and from there to major pipeline networks like NGTL, Alliance and T-North. 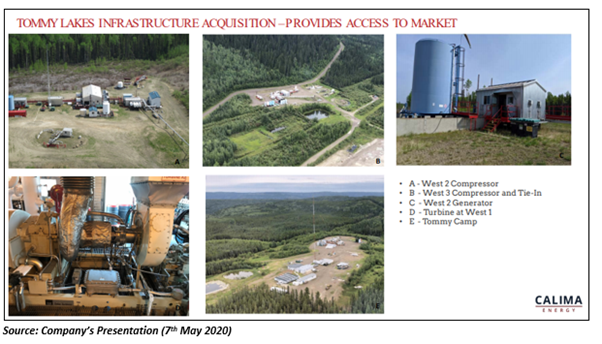 The fully permitted facilities, comprising liquids stripping, compression, and associated pipelines, are capable of transporting as much as 50 mmcf/d of gas and 2,500 bbls/d of condensate prior to expansion.

Moreover, the re-use of current facilities provides cost and time savings with minimum environmental impact. Calima also has an option to acquire eleven producing wells that could deliver fuel gas for the start-up phase of production.

Tommy Lakes Infrastructure acquisition has elevated the Calima Lands to become a development ready project, inching Calima Energy closer to a Final Investment Decision. Besides, 2C Contingent Resources of 196.1 Mmboe and 2U Prospective Resources of 497.3 Mmboe strengthens the Company’s position to progress with its strategy focused on realising value for shareholders from its exciting assets.