The use of medicinal cannabis is extending, and the developments appear to be favourable for the community. In this article, we would discuss the two stocks from the flourishing industry â cannabis. One of the stocks - MXC has come up with efficiency of Cannabinoids in treating brain cancer, while the other stock - AGH is placed under voluntary suspension on ASX.

MGC Pharmaceuticals Ltd, is a company which applies a method of âseed to pharmaâ, based in Europe. It is backed by the years of demonstrated experience in technical clinical and commercial channels of the medicinal cannabis industry.

On 24 June 2019, the company announced that the pre-clinical research had showcased the improvement using precise cannabinoid formulations in the treatment of glioblastoma â an aggressive, therapeutically resistant brain tumour. Accordingly, the research was conducted collectively along with the National Institute of Biology and University Medical Centre Ljubljana. Besides, MGC Pharmaceuticals believes the research would enhance the companyâs potential in cannabinoid compounds application on cancerous cells.

Reportedly, MGC Pharmaceuticals took on this collaborative research to evaluate the effectiveness of cannabinoid formulations in treating glioblastoma. Also, the results of the tests indicated a strong translational component of the preclinical studies, and the research participants believe that it would have broader implications for the use of cannabinoid compounds for the treatment of brain and other types of cancer. Besides, the research included- testing cannabinoid preparations in quantities that could be idiosyncratically adjusted for the patients.

Admittedly, the research includes testing of fresh tumour tissues, left from the surgical removal, to obtain the optimal cannabinoid preparation for the effective treatment of remaining cancer. Also, the optimal cannabinoid preparation could be used solely or combined with chemotherapeutic temozolomide, an existing treatment. Besides, the research suggested that selective cannabinoids preparations inhibited tumour growth in vitro; likewise, it could induce apoptosis of glioblastoma cells.

Further, a platform has been developed to predict the response of the tumour to the select cannabinoid preparations on the basis of subtype defined by the genetic fingerprint of the tumour. Moreover, the research team had investigated whether the response depends on several cannabinoid receptors expressed on the glioblastoma cells surface or not, and which of the most common receptor could be of key relevance; it might lead to a relatively simple diagnostic prediction process for cannabinoid therapeutics potentials.

Excerpt from the Research: Prof. Tamara Lah TurnÅ¡ek from the National Institute of Biology had authored the research. Accordingly, Cancer is referred to as a multimodal disease that could not be targeted by a single therapy, as demonstrated in particular brain tumours. Also, the modern treatment including surgical removal, irradiation and chemotherapy could be enhanced or replaced by the adjuvant treatment strategies along with cannabinoids.

Besides, considering the cellular experiments in vitro and in animal studies, the evidence has showcased that cannabinoids inhibit growth in the invasiveness of tumour cells and continues to be solidified; however, the evidence from human studies are not sufficient. In addition, it becomes challenging to predict the response of the individual patient to cannabinoid treatment, and it is due to large genetic micro-heterogeneity and further epigenetic transformation of recurrent glioblastoma.

As per the release, the research had been directed to examine the individualised patientâs tumour response to the two most active cannabinoids: THC & CBD. Also, it relates to the response in terms of potential synergistic effects on cell viability and apoptosis. Besides, the level of two cannabinoids CB1 and CB2 vary among patients, and it is needed to explore if the cannabinoids could evaluate the response to the tumour in vitro more or less than to the tumour subtype; this data would reveal a way to personalize potential cannabinoids therapy to be most effective.

Roby Zomer, Co-founder and Managing Director of MGC Pharma, stated that the research is a major breakthrough in treating tumours through cannabinoid-based formulations along with potential wider implications on several cancer treatments. Also, the research has represented that cannabinoid formulations could affect glioblastoma positively by reducing the growth of tumour cells and killing the cancerous stem cells. Besides, the company is creating a cannabinoid compound matrix to target a wider range of cancer and enhance R&D capabilities.

Admittedly, it was also said that the company was broadening the cannabinoid cancer research program which would also include the Royal Melbourne Institute of Technology and The Hebrew University of Jerusalem. Also, it would have material implications for the upcoming trials directed toward cancer treatment while maintaining the premier position within the cannabinoid focussed pharma sector.

Althea Group Holdings Limited is an Australian company, engaged in the cultivation, manufacturing and exporting cannabis derived products. It holds license pertaining to producing, supplying and exporting of the medicinal grade cannabis. Currently, the company operates in the highly-regulated jurisdiction being Australia & the UK, with the intention to expand throughout Europe & Asia.

Although, there have been no claims by the company regarding an acquisition. However, the media reports are suggesting some cues on this. According to media speculation, the company is looking forward to acquiring a stake in the recreational space within Canada. Also, starting from October, the regulations in Canada would allow the distribution & sale of cannabis infused products including beverages and edibles.

It appears reasonable for the company to raise capital, as it has been growing rapidly. Recently, the company on 25 June, had notified about the supply of its medicinal cannabis to the UK for the cause âProject TWENTY21â, which is directed to enrol 20k patients in the region to treat various disorders and disease. 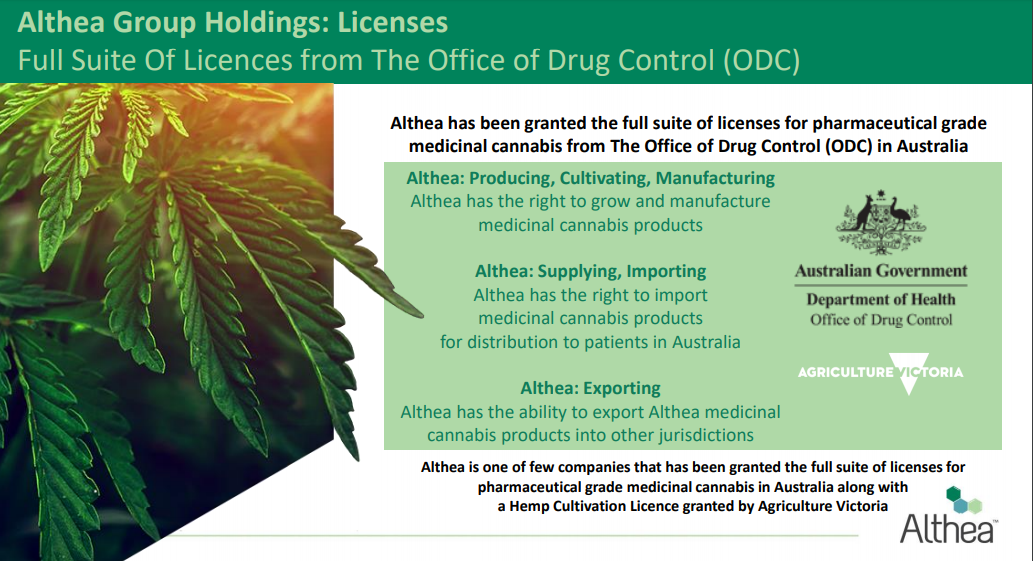 On 14 June 2019, it was also reported that the company had enrolled 1000 patients prescribed under the medicinal cannabis products in Australia. Besides, about 185 healthcare professionals had prescribed Althea medicinal cannabis. Further, the June numbers depicted an increase of 53% from the previously reported numbers in April.

On 5 June 2019, the company reported that it received Hemp Cultivation License, which allowed the company to cultivate and process of low-THC (Hemp) cannabis. Also, the license relates to the commercial purpose for non-therapeutic use. Concurrently, it was also reported that the company had signed an exclusive agreement with Tissue Culture Australia (TCA), which would result in the development of proprietary tissue culture protocols for cannabis plants collectively with TCA.