The below-mentioned health care stocks have come up with significant updates today. Let’s take a quick look at these stocks.

Following the release, the share price of the company increased by 3.846% during the intraday trade.

This is a significant agreement for the company as Germany and the associated regions represent a key emerging market within the wider European zone, and moreover, the German medical cannabis market alone is estimated to grow to €7.7 billion by 2028.

Recently, the company signed a New distribution agreement with a Brazilian based company, ONIX Empreendimentos e Participações to gain access to the Brazilian market via ONIX’s subsidiary OnixCann, a distributor of phytocannabinoid-based products in Brazil connecting doctors and patients.

As per the terms of the agreement, ONIX, through its affiliates or service providers, will utilise standard operating procedures to exclusively commercialise and distribute MGC Pharma products in Brazil for a minimum term of three years. The products will be commercialised by ONIX solely under MGC Pharma's brand and ONIX will be responsible for obtaining the market approvals to import products to the individual in Brazil.

A globally active biotechnology company, Immutep Limited (ASX: IMM) has made an announcement stating that it has been granted a new patent (number 2014368420) by the Australian Patent Office

The new patent which is entitled “Combined Preparations for the Treatment of Cancer” is highlighting the broad potential of efti, Immutep’s current lead product, as an immunostimulant and provides patent protection in Australia for a range of novel and highly relevant chemo-immunotherapies featuring efti that may be pursued in the future.

Recently, the company announced that it has completed the recruitment of Initial Cohort in 1st Line NSCLC Patients for TACTI-002 Trial, which is being conducted to evaluate the combination of the efti with MSD’s KEYTRUDA® in up to 109 patients. The initial data from the TACTI-002 study is expected to be released in mid-2019.

The company is progressing well under its strong leadership team. The company is currently headed by highly experienced Mr Marc Voigt, who is acting as a CEO of the company.

During the first half of the financial year 2019, an encouraging data was posted from the company’s lead immunotherapy product candidate efti, with data from its Phase I TACTI-mel clinical trial presented at the leading industry conferences.

Australian medicinal cannabis company, Althea Group Holdings Limited (ASX: AGH) has received its first patient prescription for medicinal cannabis in the UK via its wholly-owned subsidiary, Althea MMJ UK Ltd. Along with this, a planning permit has been issued by Frankston City Council for Althea’s Australian cultivation and manufacturing facility.

Following the release of this news, the share price of the company increased by 8.235% during the intraday trade.

The company is expecting to receive further patient prescriptions in the upcoming days. While commenting on the planning permit, the company’s Director of Cultivation, Daniel Mansfield told that the company will continue to work towards its goal of meeting a 2020 production target.

The company recently achieved the 1,000-patient milestone in Australia with 227 new patients in the month of May. 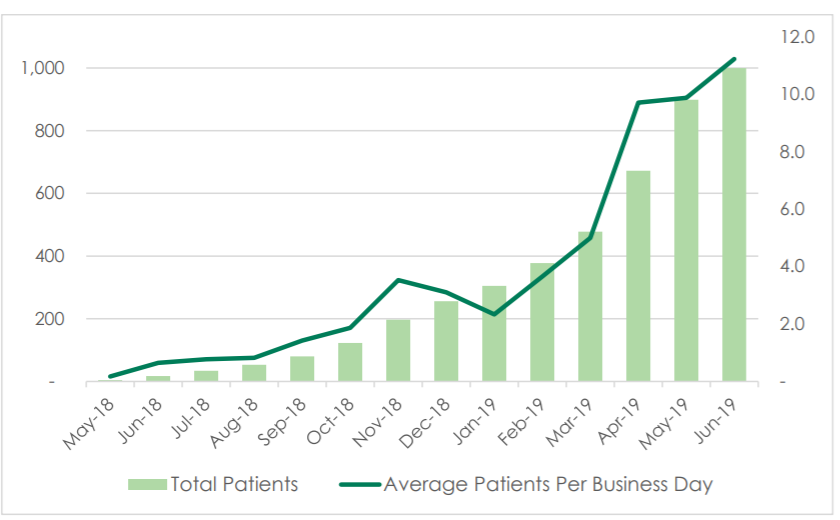 The company was recently granted a Hemp Cultivation License for commercial purposes related to non-therapeutic use, which is an encouraging piece of news for the company and its shareholders.

In order to begin importing and distributing its branded medicinal cannabis products in Australia, the company entered into a number of strategic partnerships. The company has established a complementary education and patient support service via its Althea Concierge mobile application and a web-based platform which provides information and support to its patients and health care professionals for accessing medicinal cannabis.

The Australian market for medicinal cannabis is emerging, with the current regulatory framework for cultivation, manufacturing, distribution and consumption only being enacted in 2016. The company intends to become a leading and trusted medicinal cannabis brand in Australia by establishing medicinal cannabis cultivation, cannabinoid extraction and manufacturing facility. At the time of its IPO, the company informed that it does not expect to pay dividends in the near future, as its focus will primarily be on using cash reserves to seek the development of its business.