Here’s Why Althea Group Is Up By 7% Today?

Althea is one of the few companies that has been granted the full suite of licenses for pharmaceutical grade medicinal cannabis in Australia along with a Hemp Cultivation Licence granted by Agriculture Victoria. Moreover, it also provides complementary education, access and management services to the patients and prescribers of its products to sail through the entire process of treatment via medicinal cannabis. 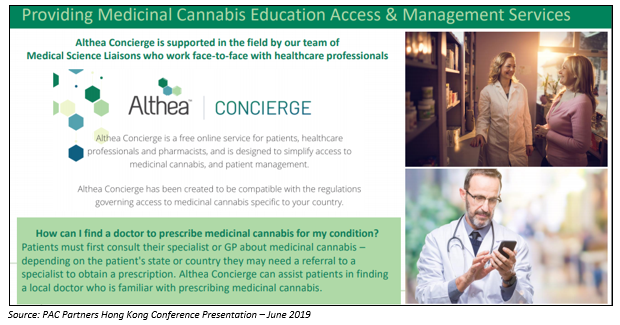 Today on 25 June 2019, the company pleasingly announced that it has furthered its relationship with independent scientific committee Drug Science with the goal of increasing the number of patients that can be prescribed medical cannabis in the UK.

The Drug Science Medical Cannabis Working Group, which includes the United Patients Alliance, is launching the UK’s first national pilot “Project TWENTY21” for medical cannabis on 18 July 2019. The pilot aims to enrol 20,000 patients before the end of 2021 and will use a real word data patient registry to examine the efficacy, safety and patient-reported outcomes in patients prescribed medical cannabis. Althea has been selected to supply its range of products for the pilot.

First patient prescription in the UK

Recently on 21 June 2019, the company announced that its wholly owned subsidiary, Althea MMJ UK Ltd, had received its first patient prescription in the United Kingdom for Althea medicinal cannabis.

The receipt of the first prescription in the UK is a culmination of months of work since Althea’s February 2019 announcement that it had entered the highly regulated UK market. The company sees the United Kingdom as the second significant distribution channel for its medicinal cannabis products that are being produced in Australia. Going forth, the company expects to get more patient prescriptions, as well as export its Australia-manufactured products.

According to stockbroker PAC Partners, Althea's UK office is larger relative to its Australian counterpart, in terms of both sales and marketing teams. With the UK market being massive and Althea having a first mover advantage, the company can look to a prosperous future.

Outlook for United Kingdom Cannabis market- With an addressable (treatable) population of ~ 2.9 million, the United Kingdom is a significant emerging market with immense potential for medicinal cannabis products.

Further to this key accomplishment, the company has also secured a planning permit from Frankston City Council for its fully funded Victorian-based cultivation and manufacturing facility in Australia.

Althea CEO & Managing Director Josh Fegan commented on the recent development and explained that in order to operate within such a highly regulated industry constant interaction with all levels of the government is required.

Althea’s medicinal cannabis products are currently greenhouse grown and manufactured by its 25% shareholder, Canadian cannabis company Aphria Inc. (NYSE: APHA). The safety, consistency and quality of the products is maintained by Seed-to-Sale Certification, which is a stringent quality management program involving around 509 steps from cultivation to manufacturing.

Meanwhile, Althea Director of Cultivation Daniel Mansfield said that the company had been working to develop the design for the world-class facility in collaboration with Aphria Inc. and other consultants.

With continuous progress, Althea is planning to meet its target to commence commercial production by 2020, as it achieves its next goal of obtaining the building permit.

In the month of May 2019 alone, Althea welcomed 227 new patients on board while the company is now averaging over 11 new patients per business day. 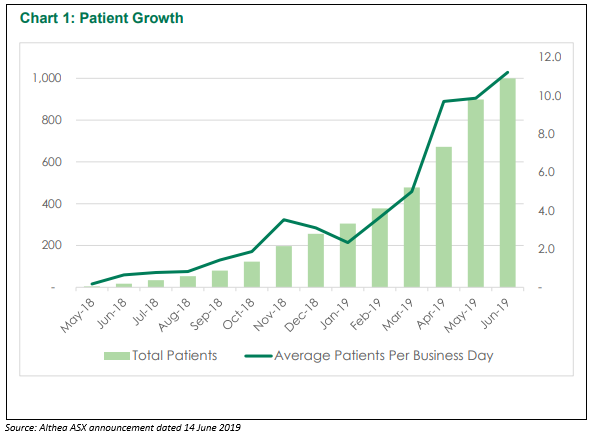 With the latest headways in place, Althea has around 185 Australian Healthcare Professionals (HCPs) prescribing its products to date. With the close of the ongoing month, the company intends to have a greater number of HCPs, around 200. The trend for the growth in the number of HCPs prescribing Althea’s products is depicted in the figure below. 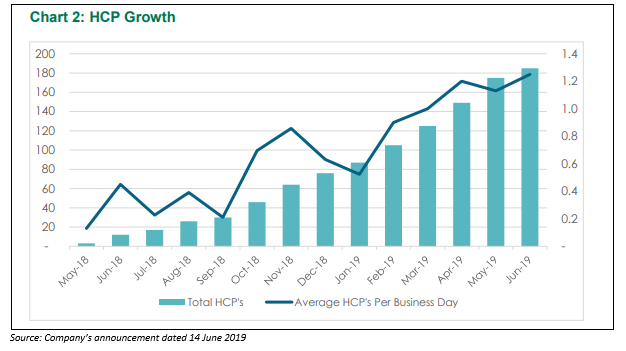 According to the company, the accelerated uptake of its products is being primarily driven by its two-pronged strategy which comprises an on-the-ground Medical Science Liaison team and Althea Concierge, which is the company’s proprietary web-based platform and a free online service for patients, healthcare professionals and pharmacists. The platform was launched in September 2018 in Australia.

Althea CEO & Managing Director Josh Fegan pleasingly commented that having reached the 1,000-patient milestone in less than nine months after the listing on the Australian Securities Exchange (ASX) has been highly encouraging for the company.

Also, in early June 2019, Althea Group Holdings informed the stakeholders that its wholly owned subsidiary, Althea Company Pty Ltd has been granted an Authority for Low-THC Cannabis (Hemp Cultivation License) for commercial purposes relating to non-therapeutic use, by Agriculture Victoria. At the same time, Althea also reported to have signed an exclusive agreement with Tissue Culture Australia (TCA), a leading tissue culture laboratory. As per the deal, TCA would provide support services to Althea in developing proprietary tissue culture protocols for cannabis plants.

Tissue culture is more advanced relative to the traditional cannabis propagation as far as the yield size, disease resistance and superior control over genetics are concerned. As a result, it is increasingly becoming the preferred technique for large-scale cannabis production.

Well-positioned to implement Australia Strategy in the UK

Althea is well positioned to replicate its Australian-borne strategy in the UK where the full suite of Althea resources, including both the MEDIC and Althea Concierge platforms, were deployed in May 2019.

Medical Education in Cannabinoids learning portal (MEDIC), accredited by the Royal Australian College of General Practitioners (RACGP), is an online portal which offers free, evidence-based education and resources on the endocannabinoid system, safety and clinical considerations, management of chronic non-cancer pain, and mental health, CINV and other conditions.

Moreover, in response to the significant educational gap in the UK, Althea is successfully collaborating with the Improving Outcomes in the Treatment of Opioid Dependence (IOTOD) scientific committee, exposing over 280 health professionals to the MEDIC platform, and directly training over 70 prescribers who were interested in medical cannabis in one session.

In May 2019, Althea facilitated the training of around 265 European healthcare professionals at the IOTOD 2019 Annual Educational Meeting in Frankfurt, by extending an independent grant to the IOTOD scientific committee.

The most prominent application of medicinal cannabis products can be found in the treatment of certain medical conditions including chronic pain, sleep & mood disorders, mental health, nausea, vomiting, epilepsy, and pain & spasticity caused by multiple sclerosis.

The main active pharmaceutical ingredients in medicinal cannabis products are cannabinoids, including but not limited to THC (tetrahydrocannabinol) and CBD (cannabidiol).

Cannabis is on track to become a $1.2 billion industry over the next 10 years, thus presenting a lucrative business landscape for cannabis players. In Australia, the patient market is expected to grow at around 9% per month over the coming year, resulting in around 15,000 – 20,000 new patients entering the market in 2019.

With current operations in Australia and momentum building in the United Kingdom, Althea Group Holdings plans to tap into the emerging market opportunities across Asia and Europe.

Small things lead to big things. The entry to the UK market would lay the ground for distribution channels and expansion into European countries, like France and Germany for Althea’s Australian-grown and manufactured products. According to stockbroker PAC Partners, as Althea gets around 25 to 50 prescriptions approved, the UK government would consider issuing bulk import for the product.

Althea is currently exploring opportunities in South Korea (~ population of 51 million) where medicinal cannabis is being legalised and France (~ population 67 million) which is expected to have legalisation in 1H 2020 and is a logical next step in Althea’s European strategy. The company is also monitoring the status of other emerging markets, including the United States – where federal legislation of medicinal cannabis would likely be highly regulated.

By end-March 2019, Althea surpassed its 500-patient milestone and its unaudited sales grew by 151% quarter-on-quarter to $182,801 for the three months ended 31 March 2019. This result was delivered despite the seasonal effect witnessed in January 2019, a time of year when many primary care doctors take leave.

The company’s share price performance for the period from September 2018 to June 2019 is depicted in the chart below. 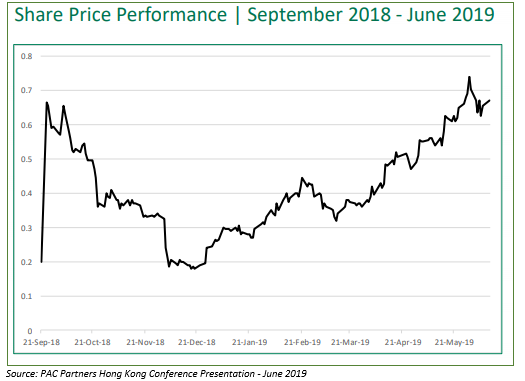