Aspire Mining Limited (ASX: AKM) is a metals, mining and infrastructure company exploring for and developing its world class metallurgical coal assets in Mongolia to deliver long-term returns to shareholders while contributing to the social and economic upliftment of the local communities.

Metallurgical coal, also known as Coking coal, with its unique caking ability, is used to produce coke, one of the imperative constituents in steel production. Brown coal, lignite and anthracite, all are different varieties of coal found globally.

The large scale Ovoot deposit is located in Khuvsgul, north-west Mongolia with a current JORC Probable Reserve of 255Mt. It was identified by the company in 2010 to 2012 and was granted a Mining Licence in 2012. Aspire is planning early production of washed coking coal from a first-stage development of the Ovoot Project, known as the Ovoot Early Development Plan (OEDP).

The OEDP will involve a truck and rail operation to deliver 4Mtpa to end markets within 12 to 15 months as the final operational and Board approvals are secured. The operations would be further expanded with the building of Erdenet-to-Ovoot Railway connectivity, that is being looked after by Aspireâs subsidiary, Northern Railways LLC.

The project spans an area of 130 km2 and the company has spent a total of USD 50 million to date in development capital on the project. A Pre-Feasibility Study (PFS), in collaboration with the lead PFS consultants, FMS LLC, was completed in February 2019.

The Road DFS has commenced and scheduled to be completed by May 2019.

In case, the company plans to further cutback the OEDP pit -

Aspire Mining has also been advancing the financing process with strong ongoing support from major shareholders Mr Tserenpuntsag and Noble Group while excellent preliminary interest has been expressed by different specialist financiers to provide debt funding for the mine, wash plant and/or road.

Meanwhile, the company has also commenced the fully-funded Definitive Feasibility Study (DFS) for OEDP with completion scheduled initially assumed to be before the end of 2019. However, approvals for the Ovoot Mine and the Ovoot-to-Erdenet Road as part of the DFS are still pending while winter is approaching. As a result, hydrological and geotechnical may be extended beyond 2019 and thus DFS is anticipated to be completed by May 2020.

If the financing is secured as planned, and the permits are also in place by Q1 2020, the pre-stripping of waste can occur from Q2 2020 onward.

The Project is located ~ 160 km east of the Ovoot Project and around 10 km from Moron, Khuvsgulâs provincial capital and is also linked to the nearby rail head at Erdenet through a sealed road connectivity. The project is currently being assessed by Aspire Mining for near term mine development, and production of washed hard coking coal.

Aspire is targeting maiden production by mid-2021 with majority of its fat coking coal being marketed and sold to steel mills in northern and north-eastern China and Russia. Among the top 84 largest steel companies in China, 48 companies have operations located in the northern provinces and municipalities. 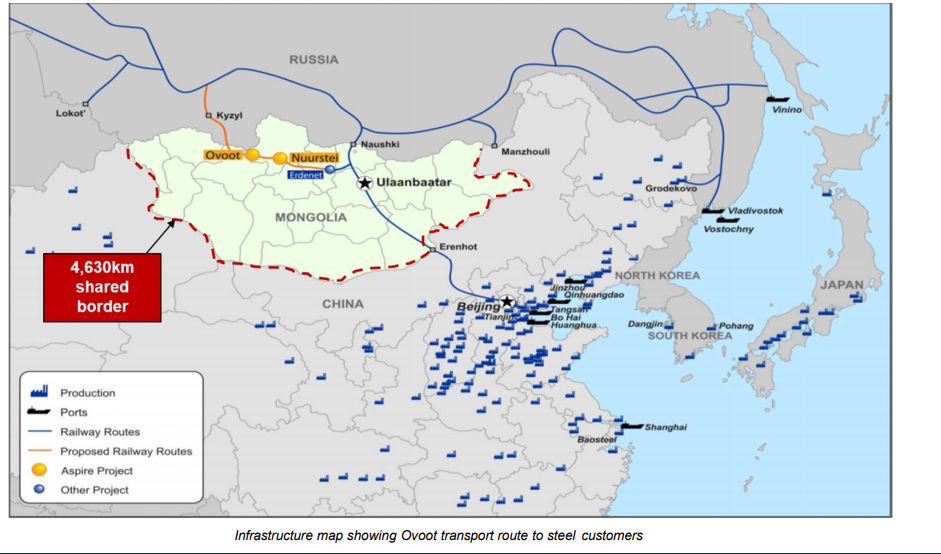 According to the results of a Coal Quality Competitive Assessment of OEDP in Chinese markets conducted by Fenwei Energy Information Services Co Ltd (global coal market consultants), it was estimated that the overall Chinese metallurgical coal market would be relatively balanced until 2025 alongside an increasing demand for quality Fat Coking Coal.

The report also identified that there is going to be a supply gap of 16â22 Mt per annum for Fat Coking Coal until 2025 and Chinaâs Hebei Province would most likely provide the highest value markets for Ovoot Fat Coking Coal production with a long-term price forecast range of RMB 1,217 (USD 176\t) to RMB 1,307 (USD 191\t) per tonne.

Aspire Miningâs market capitalisation stands at around AUD 39.92 million with approximately 3.33 billion shares outstanding. On 11 October 2019, the AKM stock is priced at AUD 0.012.