2020 First Half: A Spectacular One for Middle Island

While the year has been a bumpy ride for economies across the world amidst outbreak of COVID-19 pandemic, it appears to be ruling in favor of gold that has delivered a return of over 16% in 2020 so far. A considerable surge in coronavirus cases is generating uncertainty worldwide, thereby creating speedy demand for safe haven assets like gold.

Of late, on a flight to safety, gold rallied to its 7-year high level as the uptick in COVID-19 cases dashed hopes of rapid global economic recovery. 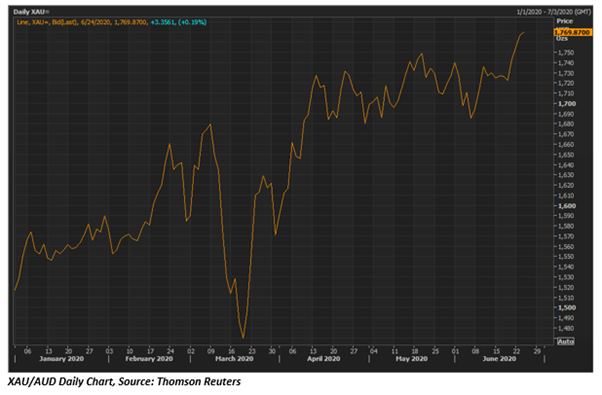 With gold dazzling to fresh record highs, tremendous opportunities are unfolding for companies operating in the gold space.

Middle Island Resources Limited (ASX:MDI) is a gold explorer headquartered in Australia, that intends to recommission its Sandstone processing plant at the earliest opportunity.

The year 2020 has been a spectacular one for Middle Island, with the Company attaining substantial success in its drill program initiated in January. Having said that, let us quickly scroll through key developments reported by the Company in the first half of 2020:

The 2020 drilling campaign was directed at defining additional gold Mineral Resources to enhance the prospect of the project’s pending pre-feasibility Study (PFS) review, that could underpin a mill recommissioning on delivering a positive outcome.

The Company notified about the discovery of a new 600m gold target at Sandstone in March 2020.

Middle Island reported a new 500,000oz gold Inferred Mineral Resource for the Two Mile Hill deeps gold deposits at Sandstone project in April this year. The new mineral resource was estimated by independent consultants, Mining Plus Pty Ltd and comprised of 480k oz associated with the tonalite-hosted portion of the deposit & 20k oz within the banded iron formation (BIF)-hosted element.

Out of these deposits, McClaren, McIntyre and Old Town Well were discovered in April while Ridge and Plum Pudding were uncovered in May.

In addition to these developments, Middle Island announced further encouraging results from Phase 1 RC drilling at Sandstone, particularly an extended intercept of 22m at 1.42g/t Au at the Two Mile Hill deposit.

The Company also discovered a mineralised extension from drilling at the southern extremity of the Twin Shafts deposit that would be estimated and included as a maiden Mineral Resource for assessment in Sandstone’s feasibility study update.

Besides, the Company raised $4.0 million in May 2020 to fund Phase 2 RC and diamond drilling campaign at Sandstone.

Middle Island is worthy of praise for the pace at which it has progressed with its massive drilling program in 2020, reporting remarkable outcomes from Phase 1 RC drilling and commencing Phase 2 drilling on schedule. The Company seems well-positioned to generate notional Indicated Mineral Resources for inclusion in the updated feasibility study from its Phase 2 drilling campaign in progress.