Middle Island made considerable progress at its flagship Sandstone gold project during the quarter, in line with its overarching strategy, primarily targeted at recommissioning of Sandstone processing plant (kept on care and maintenance) as early as possible, via a dual approach:

The gold explorer expects the success of these approaches to underpin a Sandstone mill recommissioning decision. Moreover, the Company believes the extraordinary initial success of its current drilling campaign, coupled with economic fallout resulting from the COVID-19 pandemic which may strengthen the already rising gold price, improves potential for the realisation of its Sandstone gold project strategy.

In this context, let us now browse through the key operational activities undertaken by the Company at Sandstone project during the March quarter 2020:

Middle Island progressed at a remarkable pace with its major ~17,300m exploration and resource definition drilling campaign during the quarter, which was commenced in January 2020 at Sandstone project. The campaign collectively comprises a sequential series of aircore (AC), reverse circulation (RC) and diamond drilling programs.

As per the Company, the initial assays are very encouraging, with the identification of one deposit enhancement (Two Mile Hill), and three out of five prospects (McClaren, McIntyre and Old Town Well) appearing to signify new open pit deposits to supplement the planned mill re-commissioning inventory, subject to 1m re-sampling and infill RC drilling. 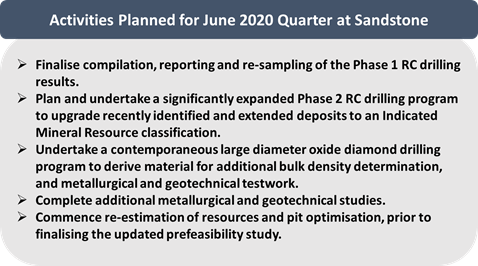 Notably, Middle Island was allocated between 19 per cent and 95 per cent of each of the four competing exploration licence applications within the highly prospective Barkly Super-Project during the quarter.

These allocations, representing some 1,363km2, comprised:

The Company does not anticipate last of its 10 exploration licence applications covering the Barkly Super-Project in the NT to be approved until at least August 2020.

During the quarter, the Company closed a fully underwritten, non-renounceable, pro-rata entitlement issue of 1 new ordinary share for every 2 ordinary shares held on the record date, at an issue price of $0.004 per new share, along with a free attaching option (exercisable at 0.8c) for each new share subscribed, to raise $2.35 million before costs.

Subsequently, the Company’s General Meeting was held on 31st March 2020 to:

All these resolutions were unanimously passed in the General Meeting.

As at 31st March 2020, the Company had cash and liquid investments totalling $2.28 million, including $2.14 million in cash and $0.14 million in Tajiri Resources Corporation (TSXV:TAJ) ordinary shares.