The Northern Territory (NT) government has successfully allocated between 19 per cent and 95 per cent of the four exploration licence applications (representing ~1,363 sq. km) in the now moratorium-free and recently announced East Tennant IOCG province beneath the Barkly Tableland, NT.

It is worth mentioning that the Company’s tenement applications partially or wholly coincided with competing applications by ASX-listed Rio Tinto Limited (in the Tennant Creek area) and Newcrest Mining Limited (in the Barkly moratorium area), providing a solid endorsement of the project’s technical strategy and merit.

The Company notified that the outcome of these four applications was adjudicated based on various application criteria.

The NT government has allocated 58 per cent of the four contested applications to the Company, which include: 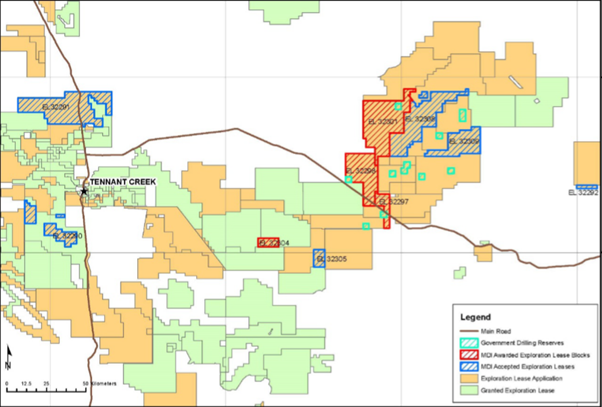 The four competitive applications were lodged by the Company subsequent to lifting of a moratorium over the top priority Barkly area of the NT’s East Tennant province.

It is important to highlight that the allocated areas involve or immediately adjoin numerous individual blocks reserved for highly expected government basement stratigraphic drilling, scheduled to be conducted during 2020 as a component of the pre-competitive research program.

The recent project release is comparable with other successful, collaborative pre-competitive research initiatives resulting in major Australian mineral discoveries under cover, including the Murray Basin of northern Victoria and the Paterson Province of WA.

The Company will initially focus on:

In a nutshell, the Barkly super-project represents a low initial exploration cost and low entry cost opportunity for Middle Island to discover high value, Tier 1 IOCG targets of interest to significant and mid-tier resources companies. The Company is well on track to commence exploration on the project in 2020 September quarter, following the receipt of all the regulatory approvals. 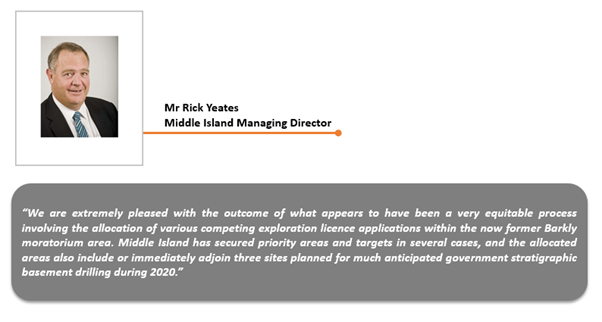